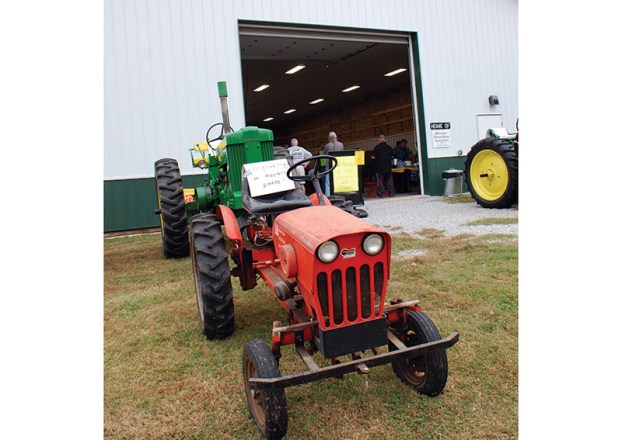 Mark Wineka/Salisbury Post Some older tractors were on display outside of the building that will become the Country Life Museum at Sloan Park.

Country Life Museum: ‘We believe in it. That’s why we work so hard’

MILLBRIDGE — As she walked toward her car with an antique drill press, Lisa Elium wasn’t sure what her husband’s reaction would be when he saw it back home.

But it was something she had to buy at the Country Life Museum auction Saturday.

And that’s partly what the Country Life Museum will offer visitors in the near future — a nostalgic view of rural life and farm equipment from years past.

But members of the Carolina Antique Power Association, the nonprofit group behind the establishment of the museum at Sloan Park, also hope some of the school children who visit the museum will be inspired to be the farmers and agricultural researchers of tomorrow.

“Farming is kind of dying out,” said Conita Small, a member of CAPA. “We can’t let it go. I feel like this will put some of that love back for kids in Rowan County.”

Small said if the museum inspired just one child to pursue agriculture as a career, it will be worth it to the CAPA members, who have worked for years to raise the money and build the enormous shell of a building that could house the Country Life Museum as early as next spring.

CAPA held a significant fundraiser toward that goal Saturday. The day included a garage sale, a one-hour live auction of 43 donated items, a raffle of several high-priced prizes, live gospel and bluegrass music and $8 chicken-and-dumpling dinners.

The museum building is located near the entrance to Sloan Park, and CAPA members, who already are meeting here, will be the curators of rotating exhibits and supply much of the manpower in staffing the museum when needed.

Much of what’s shown at the museum will be on temporary loans from Rowan County families, and CAPA members say they will make a concerted effort to keep things fresh.

Small noted the auction included farm scales for livestock that could weigh upwards of 1,000 pounds. “More than half the kids in Rowan County haven’t seen scales that weigh over 300 pounds,” she said.

A couple of used tractors were among the many high-quality items auctioned off by Glenn Hester, who donated his time. Likewise, Debbie Suggs Catering contributed the food, and this kind of generosity of time and materials has fueled everything behind the museum.

Georgia Adams, who bought some children’s books and other things at the garage sale, said she knows a lot about Sloan Park and hopes to learn more about the Country Life Museum as it develops.

She especially looks forward to bringing her grandchildren here, she said. Adams learned about Saturday’s fundraiser for the Country Life Museum when she bought raffle tickets the week before at the Salisbury Farmers Market.

Looking around the crowd Saturday, Randy Elium, president of CAPA, knew many of the people and said, “These are grass-roots supporters of the Country Life Museum.”

The 4,800-square-foot building with a concrete floor and tall garage doors on both ends will be able to house large pieces of equipment such as the 1976 John Deere 8430 tractor parked outside Saturday.

“That was a big boy in its day,” Randy Elium said as he retrieved the tractor’s keys, climbed into the cab and fired it up.

The museum will afford plenty of room to display these kinds of big tractors and many other pieces of equipment.

Things left to do on the building include signs, the finishing of interior walls and shelving for displays. CAPA members hope Saturday’s event went a long way toward paying off the loan for the building itself.

If you’re looking forward to the Country Life Museum’s becoming a reality, recommended actions are giving a money donation, joining CAPA, donating items and volunteering for the next fundraiser.

By Mark Wineka mark.wineka@salisburypost.com SALISBURY — Vern Herman, who is Cornish only by marriage, knows the saying nonetheless. “If there’s... read more