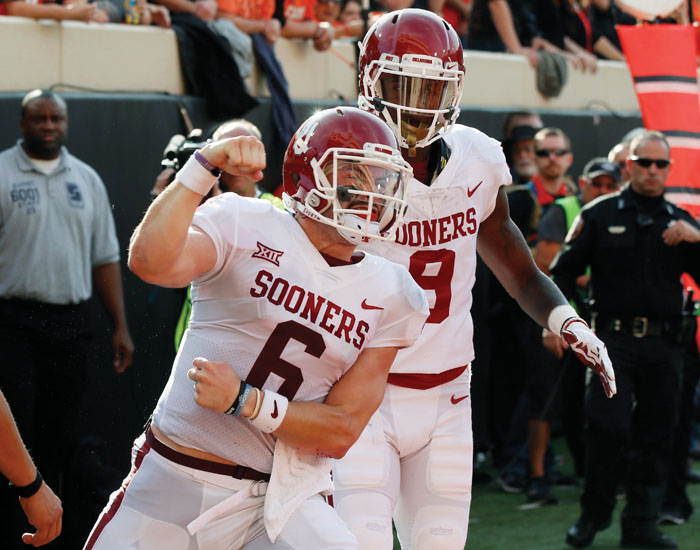 STILLWATER, Okla. (AP) — Bedlam sure lived up to its name.

Baker Mayfield passed for a school-record 598 yards and No. 8 Oklahoma outlasted No. 11 Oklahoma State 62-52 on Saturday in one of the highest-scoring games in the history of the rivalry.

Mayfield threw five touchdown passes and ran for another score to outduel Oklahoma State’s Mason Rudolph in a battle of two Heisman Trophy contenders. Rudolph passed for 448 yards and five touchdowns, but he had three turnovers in the second half.

Oklahoma State (7-2, 4-2, No. 11 CFP) appeared to have lost its last chance when Oklahoma’s Tre Brown intercepted the ball off a deflection with 1:56 remaining and the Cowboys trailing 55-52. A targeting penalty against Oklahoma’s Will Johnson negated the play, but the Cowboys couldn’t take advantage of the extra opportunity.

Justice Hill ran for a career-high 228 yards for Oklahoma State and James Washington caught seven passes for 128 yards and a touchdown before leaving the game in the second half with an ankle injury.

The game was tied at 38-all at halftime. In the second quarter, the teams combined for 52 points and 540 yards. Mayfield passed for a school-record 387 yards in the first half. Rudolph hung in there with him and passed for 258 yards and three touchdowns. Brown tied Juaquin Iglesias’ school record for yards receiving in a half with 178 before the break.

Josh Jackson added three interceptions for the Hawkeyes (6-3, 3-3), who beat their fourth top-five opponent in their last five tries at home.

J.T. Barrett threw a career-high four interceptions for Ohio State (7-2, 5-1, No. 6 CFP). The Buckeyes allowed their most points in a game under coach Urban Meyer. They committed nine penalties and gained just 371 yards in their most lopsided defeat since last year’s 31-0 loss to eventual national champion Clemson in the playoffs.

TUSCALOOSA, Ala. (AP) — Jalen Hurts passed for a touchdown and ran for a score and Alabama sweated out a bruising victory over LSU.

The Crimson Tide (9-0, 6-0 Southeastern Conference) had to withstand a rare challenge this season from a league opponent, managing it with big plays from the defense and a handful of timely ones from Hurts.

The Tigers (6-3, 3-2) kept getting defensive stops in the fourth quarter but couldn’t muster a threat.

ATHENS, Ga. (AP) — Jake Fromm proved he can throw — and block a little, too — in leading Georgia past South Carolina.

Fromm was accurate and efficient, completing 16 of 22 passes for 196 yards with scoring passes of 10 yards to Javon Wims and 20 yards to Mecole Hardman. He did not throw an interception.

Georgia (9-0, 6-0 Southeastern Conference, No. 1 College Football Playoff) has won its first nine games for the first time since 1982. The Bulldogs needed a Mississippi win over Kentucky on Saturday to clinch a spot in the SEC championship game.

Wimbush was 15-of-30 passing and threw a 34-yard touchdown to sophomore Chase Claypool, who had a career-high 180 yards on nine receptions. Wimbush also had 110 yards on 12 carries and the second TD was a 50-yarder in the second quarter.

Wake Forest (5-3) did not go down without a fight, piling up 587 yards against a defense directed by former Demon Deacons coordinator Mike Elko.

Brian Lewerke threw for 400 yards and two touchdowns for the Spartans (7-2, 5-1 Big Ten, No. 24 CFP), and Michigan State was aided at the end by a roughing the passer call on Penn State’s Marcus Allen. Lewerke was hit by Allen on a third-down pass that fell incomplete in the final minute. The penalty moved the ball to the Penn State 22, and the Spartans were able to run the clock before Coghlin’s winning kick.

It was the second straight tough loss for Penn State (7-2, 4-2, No. 7 CFP), which fell 39-38 at Ohio State last weekend and may have had its national title hopes crumble for good Saturday.

MIAMI GARDENS, Fla. (AP) — Malik Rosier threw two touchdown passes and ran for another score, Travis Homer had a 64-yard touchdown run and Miami moved to the brink of clinching what would be its first spot in an Atlantic Coast Conference championship game.

KNOXVILLE, Tenn. (AP) — So many weeks had passed since Tennessee’s last victory that the Volunteers needed time to remember the proper locker-room reaction.

Kelly ran for two touchdowns and 79 yards Saturday as Tennessee (4-5) withstood an injury to starting quarterback Jarrett Guarantano and avoided its first five-game skid since 1988, when the Vols dropped their first six games of the season.

On a play that started at midfield with the score tied at 45, Evans looked left, slid up in the pocket and then found a streaking RJ Turner in perfect stride up the right sideline. That gave the Warhawks (4-5, 4-3 Sun Belt) a 52-45 lead with 23 seconds left.

The Mountaineers (5-4, 4-1) had tied it with 53 seconds to go and, after allowing the Warhawks to retake the lead, Taylor Lamb drove them to the ULM 39 for a Hail Mary attempt that fell incomplete as time expired.

NC A&T scored the first 14 points before NSU ended a 14-quarter touchdown drought in the series with Isaiah Winstead’s 8-yard scoring grab. The Aggies had kept the Spartans touchdown-less in 2014, ‘15 and ‘16.

Juwan Carter was 14-for-32 passing with one touchdown and two interceptions for Norfolk State (3-6, 3-3), which lost its fifth straight in the series.

The Citadel (5-4, 3-4) opened the second half with a Dominique Allen 26-yard touchdown run to pull the Bulldogs into a 17-17 tie after just three plays.

ELON (AP) — Owen Johnson lifted Elon to its eighth-straight victory with a 26-yard field goal in the second overtime to edge Towson 33-30 on Saturday.

Helping set up the win was Dondre Howell, who blocked Towson’s 33-yard field goal try to end the Tigers’ previous possession. The winning kick was Johnson’s fourth field goal of the game.

Brelynd Cyphers had 14 carries for 129 yards and a touchdown for Elon (8-1, 6-0 Colonial Athletic Association), and De’Sean McNair finished with 107 yards rushing and a touchdown.

Towson (3-6, 1-5) fell behind 27-10 but rallied in the fourth quarter with two quick touchdowns followed by a short field goal by Aidan O’Neill to tie it with 1:20 left and force overtime. Both teams hit field goals with their opening overtime drives.

Shane Leatherbury had eight catches for 109 yards and a touchdown and Jabari Greenwood finished with 130 yards receiving for the Tigers.

COLLEGE STATION, Texas (AP) — Jarrett Stidham threw for 268 yards and three touchdowns and Auburn pulled away in the second half against Texas.

Kerryon Johnson added 145 yards rushing and a touchdown and provided a highlight-reel play with a nifty one-handed catch for an 11-yard gain on third down in the fourth quarter. Eli Stove capped that possession with a 4-yard touchdown run that pushed the lead to 42-20.