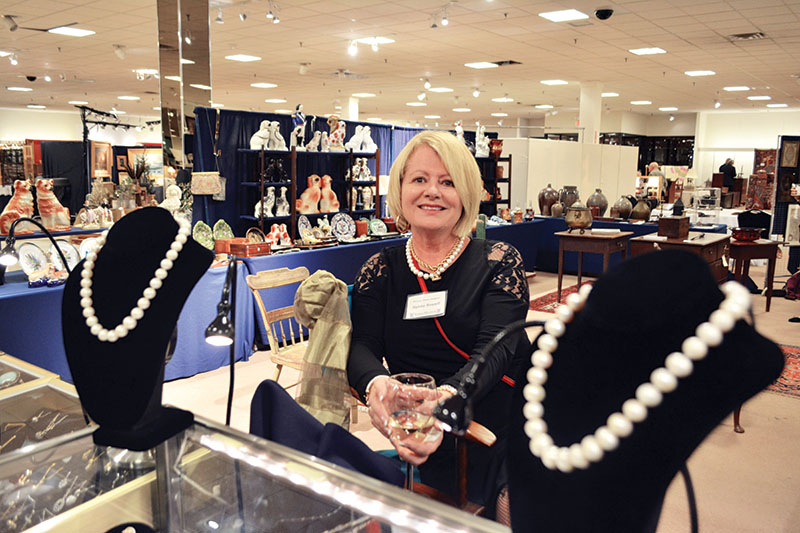 Longtime dealer Sylvia Rowell sits at her booth during last year's antique show at the West End Plaza. She’s owner of Windsor House Antiques in Charlotte and has been at the Antiques Show for at least 12 years, she said. Photo by Susan Shinn, for the Salisbury Post.

For the first time in many years, the 64th annual Antiques Show and Sale returns to a three-day format.

For the second year, Rowan Museum’s flagship fundraiser — and North Carolina’s oldest continually operating antiques show — returns to West End Plaza. Both the sold-out Patron’s Party on Thursday evening and the show itself will be held in the same expansive space.

Despite a challenging year with leadership changes at the museum, said Executive Director Aaron Kepley, the show is set.

“We’ve got it all put together and it’s gonna go fine,” he said last week, “but it does have a lot of moving parts.”

The dealers are thrilled with the show’s expansion, Kepley said, both in extra space and in adding the extra day.

“It was something a lot of people were skeptical about,” Kepley said of the move. “But after last year people said there was no way we could go back to the old space. How could it not be better?”

Rumor has it that Davis Cooke’s booth is actually bigger than Old Sarum Gallery in Downtown Salisbury, where he offers sales, restoration and appraisals of 19th and 20th century fine art.

“And so it is,” Cooke said Friday afternoon. “Everything about the show is bigger and better. We’d kind of outgrown our previous space.”

As of press time, dealers were still being added, according to Kaye Brown Hirst, who’s working with vendors.

In keeping with longtime show tradition, caterer Debbie Suggs will be offering the traditional show menu of chicken salad, vegetable beef soup, ham and Swiss sandwiches, pimento cheese sandwiches, and homemade desserts. As she has each year since 1968, Barbara Lockert will be marshaling the volunteer servers.

“And she’s still excited about it, that’s the thing,” Kepley said. “She’s ready.”

“I can’t say enough about Kaye’s fortitude and commitment this year,” Kepley said. “Even with the loss of her dear husband, Ed, in August, she has stuck right with us. We owe a huge debt of gratitude to her. Certainly, we are grateful for her efforts every year, but especially so this year.”

Betty Mickle, board president, is co-chairing the show with Hirst.

“Betty has done a fantastic job of keeping the spirit of the show intact, while ensuring that the event will raise as much money as possible,” Kepley said. “This show couldn’t happen without Betty, Kaye and Barbara, and so many other of our wonderful volunteers.”

The Antiques Show and Sale raises money for the upkeep of Rowan Museum’s properties, include the museum building on North Main Street, the Old Stone House in Granite Quarry, the Utzman-Chambers House on Jackson Street, the China Grove Roller Mill, and the future Rowan County Civil War Center, along with expanded education programs with Rowan-Salisbury Schools and Horizons Unlimited.

For more information about the show, please call Rowan Museum at 704-633-5946 or visit rowanmuseum.org.