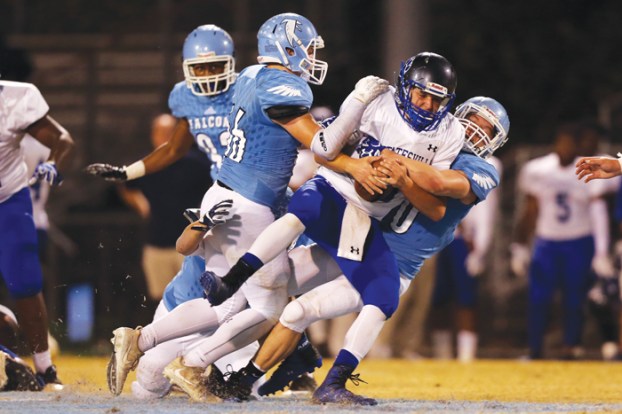 James Sipes/for the Salisbury Post West Rowan's Baiden Suddarth (90) locks up Statesville QB Bryant Young (10) in the backfield as Daniel Durham (56) comes in and finishes off the sack. Statesville won, 34-24.

Young comes back to lead Statesville past West Rowan, 34-24 The Statesville quarterback — and son of former West coach Scott Young — had himself a field day against the host Falcons, dissecting a tissue-soft defense and helping the Greyhounds lock down second place in the final NPC standings.

“A lot of this was for him,” Young said of his father, after Statesville amassed 509 total yards and gained a 34-24 victory. “He’s given me everything I’ve needed to further my career. He’s a great man and a great coach.”

Young served up well-placed passes like hors d’ouevres on a tray, throwing for 317 yards and four touchdowns as Statesville (9-2, 4-1) closed the regular season with four straight wins. West (6-5, 3-2) was relegated to third place and will open the 3A state playoffs on the road.

“Give credit to Statesville,” disappointed coach Joe Nixon said after West’s modest two-game winning streak was halted. “They’re 9-2 for a reason. They did just about anything they wanted to do. They threw the ball, caught the ball, ran the ball. And their defense got stops when they needed to. They outplayed us, out-coached us, beat us all the way around.”

It didn’t start out that way. West scored touchdowns on its second and third possessions of the game and led 14-0, eight minutes into the contest. Junior quarterback Payne Stolsworth, who passed for 223 yards a first-quarter TD to Cameron Graham, was quick to credit the offensive line.

“They were run-blocking really well,” he said. “Rolling off the ball and hitting the people they were supposed to hit.”

The party quickly ended late in the opening quarter. Statesville took 20 snaps in West territory in the first period and drew within 14-7 when Young steered the Hounds 74 yards in 10 plays, the last 16 on a swing pass to Izaiah Gathings with 6.3 seconds remaining. Only 1.4 ticks hung on the clock when Stolsworth’s next pass was intercepted by safety Tynan Tucker at the West 18-yard line.

“It was a screen out of the backfield and (Tucker) just happened to be in the right spot,” Stolsworth said after completing 15 of 28 attempts. “When we put two guys in motion (Jesse Baker and Caleb Link), we thought he would drop back. But he just stayed there and made a play.”

It proved costly when Young and Gathings hooked up again just seven seconds into the second quarter, trimming West’s margin to 14-13. The Falcons regained momentum when Jayden Jones took a handoff and rumbled 67 yards for a touchdown and a 21-13 advantage. But again Statesville responded — first when Young lobbed a 5-yard TD to Gathings (8 receptions, 121 yards) with a minute left in the half and then when Brandon Joyner scored on a 56-yard jailbreak heave to put the Hounds ahead with just 20 seconds remaining.

Joyner was wide open on the play, prompting an explanation.

“It was a blown coverage,” said West linebacker Anthony Chance. “We had the right play called but didn’t execute it at all. It changed the game. At halftime we had to regroup because everybody was a little bit off.”

The Falcons got as close as 28-24 when they settled for a Fredrico Cruz kicked a 26-yard field in the third quarter. It capped a 13-play drive that stalled after reaching the Statesville 4-yard line. In the fourth period West methodically moved from its own four to the Statesville 19 — using 14 plays and nearly five minutes of game clock — only to come up empty when Stolsworth was sacked on fourth down.

“They put pressure on me and messed up a lot of plays,” Stolsworth said. “They seemed to call the right stuff for our plays.”

They did, right up until the final horn. And when they rolled the final credits, it was Young’s name that drew top billing.

“That young man played a great ballgame tonight,” said Statesville coach Randall Gusler. “And the best thing he did was manage the game. He helped us control the clock and weather the storm.”

The loss means West will travel when the playoffs kick off next Friday. For the record, the Falcons are 4-1 on the road.

“It’s fine,” Chance said afterward. “We like taking our show on the road.”

NOTES: Stolsworth was sacked four times. Martavio Rankin (89 yards) and Jones (83) powered a West running game that picked up 174 yards. Receiver Jalen Houston had a quiet first half but finished with eight catches for 96 yards. … Young has passed 1,931 yards and 19 touchdowns this season. Teammate Caylon Imes topped the 100-yards rushing mark for the fifth time, puncturing the Falcons for 128 on 20 carries.