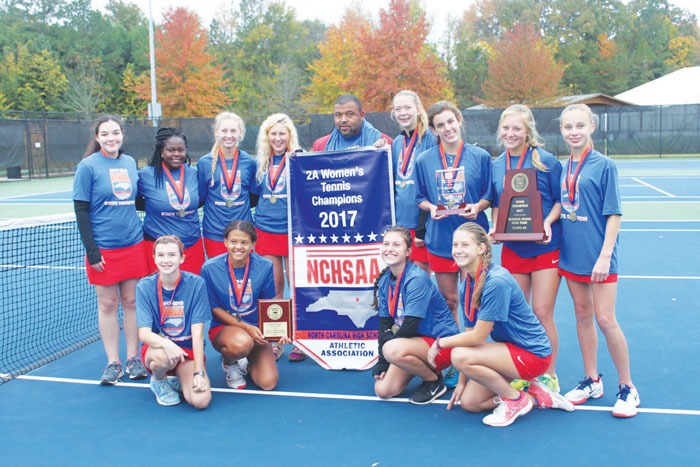 Five rounds into the 2A state playoffs, the Hornets unlocked their treasure chest of a post-season and added the crowning jewel — a 5-0 victory against Bartlett Yancey in the championship match.

He should be. Salisbury needed only an hour and 20 minutes to sweep past Bartlett Yancey and secure its 20th consecutive victory. The Hornets won 28 of 29 individual matches during the playoffs and were never required to play a doubles match.

“We didn’t care how we did it. We just knew we had to win this,” freshman Lillian Rusher said after winning at No. 4 singles. “We didn’t come this far to get second place.”

Teammate Julia Honeycutt, one of three seniors in Salisbury’s rotation, was even more emphatic. “It needed to be done,” she said.

Then came a revelation from Emma Nianouris, the freshman third-singles player whose 6-3, 6-2 win over Bartlett Yancey’s Kaleb Stephens clinched the title. “I’ve loved this whole season,” she said, a smile pasted to her face. “It makes a dream come true. I have always wanted to be a part of this.”

Salisbury’s day began with a quiet bus ride piloted by Griffith, who issued a gag order so the Hornets could focus on the challenge awaiting them. “He called it ‘meditation time,'” said freshman Meredith Burton. “He wanted us to get our minds on the match.”

Most complied, though sixth-singles winner Bethanie Stauffer took a much-needed nap. “I had to,” she explained. “I woke up sick this morning. I’ve felt awful all day, but none of that matters now.”

When they arrived, their showdown with Bartlett Yancey (22-3) was delayed 90 minutes due to wet courts.

“That made us all really anxious,” said Honeycutt. “And the longer we waited, the more nervous we felt.”

Senior Maria Capito was first on and off the court at No. 1 singles. Her 6-0, 6-1 victory against senior Hanah Watlington was more deliverance than domination, but earned her a three-way share of the tournament MVP award.

“She was a really strong player,” Capito said. “But I could get to everything she hit. I was very concentrated because today would have been my grandmother’s birthday. I felt like I was playing for her.”

Honeycutt prevailed on court No. 2, winning 6-2, 6-0 against junior Norah Massey. A key juncture came in the first set after Massey won successive games to draw within 3-2. “We didn’t know where we were going from there,” said Griffith. “Then Julia stepped up and made it happen.”

“In my head, I knew I couldn’t give up,” Honeycutt added, after winning the next nine games. “She had a really good drop shop that caught me a couple times, but there was a long way to go. I realized she had trouble handling the long, deep shots so I tried to hit the ball deeper. The second set was pretty quick. I just stayed focused.”

Rusher was near perfect in her 6-0, 6-0 decision over Cameron Grace Brown. “When her serve would go in, it was very good,” she said. “She had a good lob and a solid ground stroke. I just had to move her around the court and get to every ball.”

Nianouris controlled the net and corners in her title-clinching victory. “To me, she’s not a freshman any more,” said Griffith. “None of them are. They’re just so good.”

Stauffer’s 7-6 (7-1), 6-1 nod over freshman Sarah Kate Watlington was mostly mind-over-matter. “In the first set, she took the opportunity to hit winners,” Stauffer said. “I had to keep placing shots and keep her moving. In the second set, I figured out what I needed to do.”

Burton’s No. 5 singles match against Carrie Anne Brown was never completed, but she took the first set 7-6 (7-2) and was ahead in the second. Afterward, when potential had been convincingly spun into gold, she offered an insightful comment.

“I think we expected to win this match,” she said. “You can’t say the same for some of the others. But we got through them and proved that we were worthy.”

NOTES: Capito, Honeycutt and Stauffer — the three seniors — co-accepted the MVP plaque. Capito was also honored with the Sportsmanship award. … Capito, Honeycutt, Rusher and junior Skye Mowery each have older sisters who played for SHS state championship teams. … Honeycutt was talked out of playing in a Powder Puff football game at Salisbury on Friday. … More research is necessary, but this may have been Salisbury’s 12th state title. Seems the 1985 team was declared champion without playing a post-season match — before the NCHSAA established the dual team format.