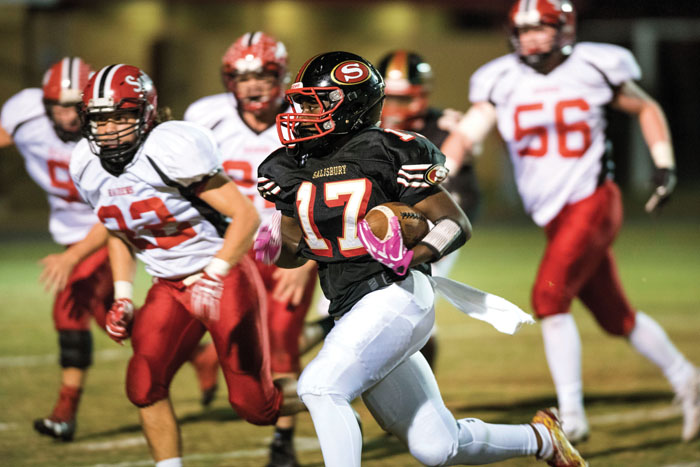 JON C. LAKEY / SALISBURY POST Salisbury’s Mike McLean (17) runs along the outside to slip into the end zone on an 8-yard scoring romp, during Friday night’s game against South Rowan at Ludwig Stadium. Salisbury won the game, 28-6.

SALISBURY — Salisbury beat South Rowan, 28-6, on Friday at historic Ludwig Stadium, continuing a whirlwind turnaround from 3-8 in 2016 to 7-3 under first-year coach Brian Hinson.

The Hornets, who finished third in the Central Carolina Conference with a 6-2 mark, missed out on the playoffs the last two seasons. But today they’ll eagerly await the release of  2A seeds and pairings by the NCHSAA. This will be the first winning season for the Hornets since 2012.

“I’m really happy for our seniors,” Hinson said. “We talked about getting this program back to where it was, and they took pride in giving us a solid foundation to build on. I talked to our seniors about when I was recruited by Catawba. They were 2-9 when they were recruiting me, but they were top five in the nation when my class left. That was such a great feeling, and I hope our seniors feel like that tonight.”

Senior  Griffin Myers threw three touchdown passes for the Hornets, with two transported to the end zone by the wheels of senior Trell Baker. Junior Tyrone Johnson had the other TD grab, a tough one by the spunky little sprinter in traffic. Steady freshman Mike McLean added a rushing TD, while junior Jack Fisher kicked four PATs.

South could move between the 20s behind workhorse Demarcus Blackwell and human bowling ball Andrew Byrd. South won time of possession and out-yardaged the Hornets, but the only time the Raiders changed the scoreboard was on a Brett Amburn-to-Cameron Hurd pass late in the third quarter. By then, the Hornets were in control, 28-0.

Salisbury’s offense scored two TDs that were crushers — in the final seconds of the first half and at the start of the second half.

“But you have to credit our defense for most of what happened tonight,” Myers said. “They got early turnovers and that took some pressure off the offense. Those turnovers sparked our offense even more than they did our defense.”

Blaine Shellhorn, a linebacker/strong safety who had missed the two previous games with a concussion, was involved in vital plays for the Hornets. He blocked a South field goal and he got a sack and a fourth-down QB hurry to spoil South’s opportunities to rally in the fourth quarter.

“I love the game and I was really sad being out the last two weeks,” Shellhorn said. “It was good to be back out there on the field again, competing with guys who are like my brothers.”

South (3-8, 3-5 CCC) has made serious strides in its third year under coach Daniel Yow, but the Raiders put the ball on the ground on their first offensive snap, and Salisbury linebacker Ray Mashore got the football. Moments later, Myers found Baker for a 14-yard TD. The Hornets were on top, 7-0.

“Our first play of the game was a turnover,” South coach Daniel Yow said. “After that, it seemed like we spent the rest of the night playing catch-up.”

It got worse. When South return man Kory Sellers fumbled on the ensuing kickoff, Jabril Russell recovered for the Hornets. Salisbury quickly moved to the South 1, but a delay of game penalty pushed the Hornets back. Then Fisher’s field goal try was blocked.

South put together a determined push that carried all the way to the Salisbury 12, but SHS senior defensive lineman Levaric Johniken spilled running back Demarcus Blackwell for a 3-yard loss on a third-and-long pass play. On fourth down, Shellhorn got a hand on German Delgado’s field-goal try. The Hornets still led, 7-0.

“Shellhorn is one of those guys who is really nice off the field, but between the lines he’s like a Tazmanian Devil,” Hinson said.

South stabilized after experiencing early  jitters, but the Hornets moved 69 yards in the middle of the second quarter to take a 14-0 lead. Myers converted a third-and-5 with a short pass to Johnson to get the drive moving. Russell broke multiple tackles on a 29-yard jaunt to the South 13. McLean got the TD, fighting his way from the 8-yard line to the pylon on the SHS sideline.

The crucial swing  came late in the second quarter with the Raiders, still down 14-0, but threatening to score. South reached the Salisbury 14, but on a fourth-and-5 play, Baker broke up a pass. Junior DB Cameron Gill stopped another South threat with a fumble recovery. Senior linebacker Tevin Mullenax picked off a pass for South’s fourth turnover of the first half.

“If South had gotten to halftime, down 14-0, they would have still believed they could win,” Hinson said. “But that touchdown before the half? That just about ended their hopes of making a comeback.”

When Salisbury came out for the second half and scored on a handful of plays to take a 28-0 lead, any lingering doubt was gone.

“We got the offense clicking on that last possession before halftime, and then we came right out and scored again,” Myers said. “Our coaches had told us not to hit the brakes, to keep pushing. We got that touchdown early in the second half on a great catch by Tyrone Johnson. That was all him. I didn’t throw that ball soon enough. but he made a play with guys all around him.”

Yow’s team had fought hard, but he knew it wasn’t going to be able to overcome two TDs that were sandwiched around emotional Senior Night ceremonies.

“The end of the first half, the start of the second half, those are always very huge possessions,” Yow said. “They got to the ball to their playmakers and they made things happen. They’re a good team, talented and well-coached.”

Hurd made a fine catch and run to put South in scoring position later in the third quarter, and he drew the pass interference penalty on a fourth-down play that moved the ball to the Salisbury 5 and kept that drive alive.

“Then we ran the exact same play again for the touchdown,” Hurd said. “I’m running a simple slant, and Brett Amburn got the ball to me. I had told myself that if the ball came to me, I was going to score no matter what.”

South showed determination, but the night belonged to Salisbury’s seniors. John Pruitt, a senior who anchors the Hornets’ defensive line, got a carry late in the contest as a reward for his relentless effort as the first line of defense.

“I thought we played hard and we played smart on defense,” Pruitt said. “All those turnovers we got were big. We helped our offense get going.”