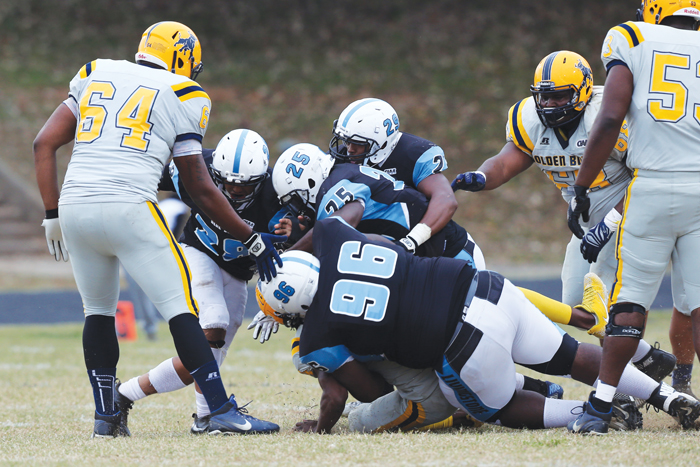 The Commemorative Classic, celebrating the 125th anniversary of the first black college football game — between Livingstone and Biddle College (now JCSU) in 1892, was unusual in the fact that two teams with losing records were playing for a trophy.

And the Golden Bulls retained the Commemorative Classic hardware and finished 2-8 overall and 2-5 in the CIAA. Livingstone concludes the season 0-10 and 0-7, last place in the conference’s Southern Division.

The winless season was the first for Livingstone since it had three consecutive campaigns (2009-11) without a victory, a combined 0-30. Daryl Williams took over as head coach in 2013 and the program had shown improvement — 15-24, prior to this season’s poor record.

“I hate it for these seniors because they worked so hard all season,” said Williams, fighting back tears, after the game. “But the good thing about it is that most of these seniors are going to graduate and that’s the most important thing. I hate to see these seniors go … that’s the hard part.”

Livingstone had played well last week at home in a 28-26, last-minute loss to Fayetteville State. The Blue Bears offense had rolled up 447 total yards and 30 first downs in the loss. Meanwhile, J.C. Smith had been shut out by St. Augustine’s, 24-0, managing just 75 total yards.

But on Saturday, before the fans had even settled into their seats, Livingstone quarterback Xavier Longerbeam’s pass on the first play from scrimmage was intercepted by the Bulls’ Tyki Lawson-Oates, setting up his offense at the 15-yard line.

Three plays later, JCSU quarterback Terrance Ervin completed a screen pass to Randy Wiley, who rambled 12 yards for a touchdown, 1:14 into the game.

On Livingstone’s next series, Longerbeam was again picked off, this time by Bulls’ safety Carlo Thomas, who returned the ball 30 yards for another touchdown.

Thomas, a senior who had just three seasons at JCSU, broke the school record with his 21st career interception.

“I just study film, come out and play ball,” said Thomas, about the interception record. “I study the tendencies of the quarterback, running backs, receivers and formations, but actually, the pick six was kind of on the fly.

“My assignment on that play was the running back and once he crossed blocked, I just stepped back and slid over there,” continued Thomas, of East Orange, N.J. “The quarterback threw the ball right in my window and I just picked it and took it to the end zone.”

That play and the 13-0 lead seemed to take the wind out of Livingstone’s sails. Even though the Blue Bears cut the deficit to 13-6 early in the second period on a 17-yard pass from Thaddeus Bell to Jordan Cartwright, the Bulls never really seemed challenged.

JCSU’s defensive line dominated the action, holding Livingstone’s offense to 2.4 yards per carry on the ground. The Blue Bears’ top runner, Justin Ruffin, had negative six yards at halftime and finished with 39 yards on 14 carries.

“If you don’t come out and play, that’s what happens,” said Williams. “The two early turnovers by the quarterback really hurt us and the offensive line play was not good enough. That’s my job to go out and fix that. I told the younger guys that I’m going to make sure that we address the offensive line in the offseason.”

Ervin connected with receiver Gabriel Yuille on a 1-yard TD toss to extend the Bulls’ lead to 20-6 before halftime.

The backbreaking play came late in the third period when, trying to get back into the game, Livingstone faced a 4th down-and-4 at the JCSU 19-yard line. But Bell was sacked by Sa’Von Williams for a 5-yard loss and a turnover on downs.

On the next play, Ervin hit Yuille with a slant pass over the middle and a broken tackle later, the Bulls’ receiver went 76 yards for a TD and a 27-6 lead.

It was all but over at that point but the Blue Bears did add a fourth-quarter touchdown and two-point conversion. Receiver Andrew Gamble made a great catch of a 10-yard scoring pass from Bell and Ruffin passed for the conversion to tight end Brandon Duncan.

Livingstone’s last possession of the game ended in another interception by Thomas, the 22nd of his career.

“It was nice to get two picks in my last game because I felt the pressure to break that school record,” said the happy Thomas. “I came out here trying to stay patient and did it.”

Smith QB Ervin had an outstanding game, running for 148 yards on just 12 carries and passing for 190 on 14 completions. Yuille had three catches for 102 yards.

“It’s always good to get a win, especially the last game of the season,” said JCSU head coach Kermit Blount. “We’ve had a tough year and to come into Salisbury and retain the trophy is a plus for us. I’m just happy for our seniors and it’s something to build on for next year.”

And Blount glowed in his praise for Thomas, his star safety.

“I just wish I had him back for another year,” added Blount. “He is an awesome young man. I told him to close it out on that last possession and he went out and got another interception. He’s a phenomenal player and a great kid off the field as well.”

NOTES: Gamble had four catches for 69 yards to lead Livingstone. … LC’s offensive line yielded seven sacks on the day. “We’ll regroup,” added Williams. “We’ll hit the road recruiting and get it fixed.” … JCSU receiver Demarcus Berry was ejected in the second half for throwing a punch. … Linebacker Blake Hickman recovered a fumble for the Blue Bears.