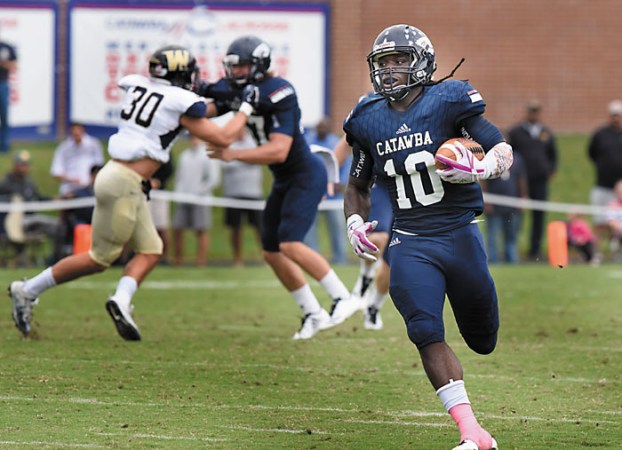 LAST WEEK: Catawba stumbled through a dismal first half but made amends with one of its better second halves and beat Limestone, 45-28. Newberry got smacked at Wingate, 44-20, in a game in which the rampaging Bulldogs clinched a share of the SAC title.

COACHES: — Catawba’s Curtis Walker is in his fifth season and is 33-21. Walker is 2-2 against Newberry. Walker played linebacker for the Indians and is still in the school record book for tackles in a game (25 vs. Wofford in 1991) and fumble recoveries in a season (6). He was the 2015 South Atlantic Conference Coach of the Year.

Newberry’s Todd Knight was the 2016 SAC Coach of the Year. Newberry was not a traditional winner when Knight was hired. He’s 54-43 in nine seasons and has guided the Wolves to the D-II playoff three times in the last four seasons.  Knight’s background is on the defensive side. He was a linebacker at Gardner-Webb in his playing days. He served as Newberry’s defensive coordinator for six years before he was elevated to head coach. As head coach, Knight is 5-3 vs. Catawba.

SERIES: Catawba leads 40-37-3, but the Wolves have taken six of the last nine meetings.

KEY PLAYERS: Catawba speedster Kenyatta Greene has 11 touchdowns (6 rushing, 5 receiving) and is becoming a bigger part of the offense each week. Patrick O’Brien threw for  403 yards and four touchdowns and was SAC Offensive Player of the Week. He also was named Catawba’s MVP for the game. Tight end Jourdan Osinskie and receiver Sam Mobley are coming off  100-yard outings. Keyon West made one of the best catches Walker ever saw at Limestone. The pass was actually directed at Eamon Smart, but West snagged it one-handed and went to the house.

Defensively, senior linebackers Trey Evans (69 tackles, 8 tackles for loss), Kyle Kitchens (14.5 tackles for loss, 11 sacks) and Michael Peppers (52 tackles) are in the homestretch of epic careers. Young DB Caleb Allen had the first field goal block of his life last week in a key situation. Keep an eye on Zach Lecius (52) on kickoff coverage. He was Catawba’s player of the week for special teams. The Florida native has been in on 12 tackles.

Newberry no longer has talented QB Raleigh Yeldell, the SAC’s most dynamic offensive player in 2016, so the best-known member of the Wolves may be defensive end Jamarcus Henderson. He’s made All-America teams. He has 4.5 sacks and 44 tackles this year. Cornerback Kardeem Hines’ unusual stats indicate he’s a candidate to blitz. He has seven sacks and 12 tackles for loss.

Newberry employs two quarterbacks — sophomore Nick Jones and redshirt freshman Greg Ruff. Jones has thrown for more yards, but Ruff has been more efficient. Ruff has 11 TD passes and no interceptions. Ruff, who played at Rock Hill prep powerhouse South Pointe, is also a running threat. He netted 95 rushing yards last week. Whoever plays quarterback will try to get the ball to Markell Castle. Nine of Castle’s 33 catches have gone all the way.

WORTH MENTIONING: Even without Yeldell, Newberry was picked to repeat as SAC champ in the preseason, but the ball hasn’t bounced the Wolves’ way in consecutive losses to SAC opponents Tusculum (two OTs), Limestone (last-minute loss) and Wingate.

The Wolves  failed to contain Wingate’s stars. Lawrence Pittman, who also left a few bruises behind when he visited Catawba, bulled for 148 yards and two TDs last week, while elusive BJ Muckelvene torched the Wolves for 237 yards on receptions and returns.

Newberry has a roster built almost entirely from South Carolina high schools. There are a couple of guys from Florida and Alabama on the depth chart.

Newberry will be playing its sixth road game. The Wolves triumphed on the road at Lenoir-Rhyne and Carson-Newman, so they’re capable of putting together a good outing at Catawba.

“They’re very talented,” Walker said. “We have to take care of the ball better this week and we have to be better in pass coverage.”

There’s no rational explanation for it, but Catawba has fared better on the road under Walker (19-9) than at home (14-12). The last time Catawba played at home on Oct. 14, it lost to Wingate. The last two weeks on the road, Catawba has piled up 85 points and has won by margins of 27 and 17.

If anything happened to O’Brien today, Catawba fans probably would get their first look at true freshman QB Ken Avent III. Obviously, the Indians still want this to be a redshirt year for Avent, but he’s been wowing coaches in practice with his arm and his head. The Indians are excited about the youngster’s future.
Don’t forget about true freshman DB Brenden Westbrook. The former Carson star is redshirting, but he was the defensive player of the week for Catawba’s developmental team.

Catawba moved up to sixth in the Southeast Region this week. Seven teams from the region will make the playoffs,. If the Indians finish 9-2 — that would require beating Newberry and Lenoir-Rhyne at home — they’ll definitely be in the playoffs. They might even be at home in the first round.

OUTLOOK: A lot of things point to a terrific game today. There’s must-win pressure on the Indians, but Newberry will roll into Salisbury with nothing to lose.

“Newberry will give us their best shot,” Walker said. “They’re still playing to have a winning season. That’s a lot to play for.”

NEXT WEEK: Catawba is home against Lenoir-Rhyne to close the regular season. Newberry hosts Mars Hill.