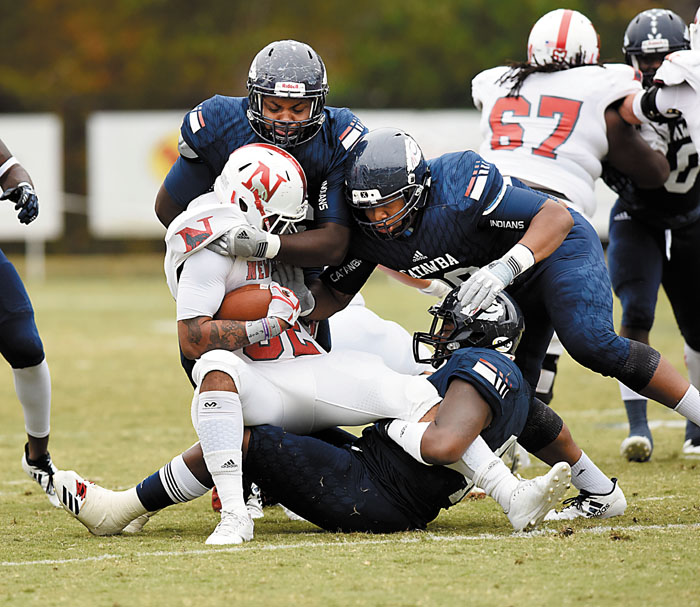 Catawba won, 17-13, with a ton of defense and two magnificent touchdown catches by Keyon West on fastballs fired by Patrick O’Brien that crackled and sizzled through the gloomy autumn air. The 1,719 people who were there probably will remember it as the “Keyon West Game” — and well they should. He latched on to two balls that came his way through the tiniest of windows.

“When a chance is there to make a play, you do your best to make it,” West said. “We came out slow, put our defense in tough situations, and we needed to make up for it.”

It was a desperate encounter, physical and then some, with athletes going down on both sides. Five different players took snaps for Newberry. The first two were the Wolves’ normal rotating quarterbacks. The last three were emergency wildcat guys — running back Darius Clark, tight end Baptiste Staggers and receiver J.T. Waters. Waters looked like he probably played QB in high school. Clark tried to run around the Indians. Staggers just wanted to run over them.

“There’s no way you can prepare for something like that,” Catawba linebacker Kyle Kitchens said. “But we made the adjustments we had to make.”

Catawba’s offense can be dynamic when it’s clicking, but it snored through the first quarter, leaving the defense to fend for itself. Catawba’s three senior linebackers — Kitchens, Trey Evans and Michael Peppers — were everywhere. Newberry got a 49-yard field goal from Shea Rodgers, but the Wolves dropped on-target passes from starter Greg Ruff that might have put the Indians in a deep hole.

Catawba’s initial first down came on a run by O’Brien in the second quarter. Then the Indians slowly stirred to life. Catawba drove from its 8 to the Newberry 11. Lee Brackman’s 28-yard field goal tied the game.

O’Brien’s 34-yard connection with Sam Mobley got the Indians moving again late in the first half. O’Brien’s 8-yard strike to West on third-and-goal and with only 25 seconds left in the half put Catawba on top, 10-3. West caught it at the edge of the end zone, tiptoeing to stay inbounds.

“Corner route —and  Keyon is great at it,” O’Brien said. “He’s a great route runner, but’s he’s also physical and he can make a play on a ball like that. That got us going.  I guess we got going when we had to.”

Newberry (4-6, 2-4 SAC) got even late in the third quarter after a controversial play. Catawba back Eamon Smart appeared to be down, the play appeared to be over, but then the ball popped out on the Catawba 25, and Newberry recovered.

Newberry pounded the ball across the goal line seven plays later for a 10-all tie. The 6-foot-4, 230-pound Staggers hammered for a first down at the Catawba 3. Then he barged into the end zone with ferocity with 2:35 left in the third quarter.

At 10-all and with the fourth quarter fast approaching, Catawba needed to answer — and did. Mostly the Indians answered with Kenyatta Greene. He carried on five straight plays, personally transporting the ball from the Catawba 25 to the Newberry 28. With 11 defenders looking at Greene, O’Brien hit Mobley for 15 yards to the Newberry 13, as the quarter ended.

Two plays lost a yard, but on third-and-11 from the 14, O’Brien was looking for West again.

“I ran straight ahead, gave a head-bob like I was going to the outside, but then I broke back to the inside,” West said.

West didn’t look open, but O’Brien trusted him, and he whipped the ball through a sea of waving arms. West snagged it. Catawba led, 17-10.

Then Newberry drove forever, a march that resulted in a field goal that cut Catawba’s edge to 17-13, but it also sliced more than seven minutes off the clock.

“Bend but don’t break,”Peppers said. “That’s always the motto. They were tough, but so were we.”

When Catawba (8-2, 4-2), ranked sixth in the region, got the ball with 6:45 remaining, the enemy was the clock. O’Brien hit West again for a huge first down that kept the clock moving. Then the Wolves had the Indians stopped but hurt themselves badly with a late hit on Mobley for a 15-yard flag. Then the Indians used more clock, and the Wolves were burning timeouts.

With 1:57  left, Newberry got the ball for the final time. A 47-yard heave by Clark quickly put the Wolves at the Catawba 45. But Clark tried to run wide next, and DB Trey Murray spilled him for a loss of 6 yards. Three incompletions followed.

Next came two kneel-downs by O’Brien — and fans celebrated.

“I know it wasn’t pretty, but I do appreciate the effort our guys gave,” Walker said. “Maybe we weren’t all that good, but we were good enough to win.”