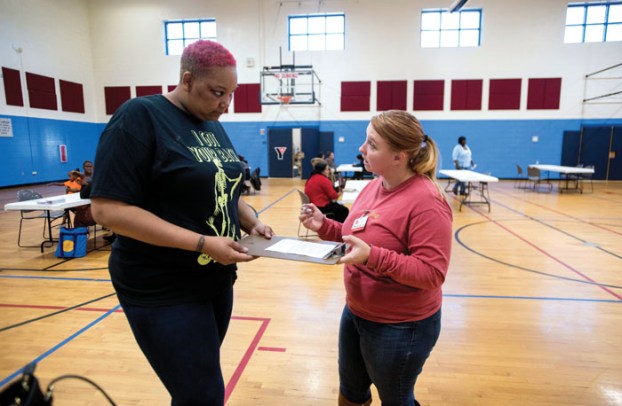 SALISBURY — Cheryl Seaman was a school bus driver in New Jersey until she was involved in a serious car accident. She’s now disabled.

She had considered skipping Christmas for her four children because she would not be able to buy them gifts.

Seaman, who now lives in Salisbury, was one of the hundreds who signed up to receive toys and clothing items through the Rowan County Christmas Bureau on Friday.

The bureau takes applications on behalf of four programs — the Salvation Army, the Salisbury Post Christmas Happiness Fund, Project Santa and Operation Santa — to streamline the application process and help agencies avoid duplication. The holiday programs, for the most part, are geared toward children 12 and younger.

The Rowan County United Way coordinates the Christmas Bureau, which is in its fourth year of taking applications for the agencies. Applications will be accepted from 8:30 a.m. to 2 p.m. today at the Hurley Family YMCA, 828 W. Jake Alexander Blvd.

Seaman, who is a single mother, moved to Salisbury four years ago with her children to be closer to her father and other family members.

She told her children — who include daughters 15, 12 and 10 years old and a son who is 4 — that she was going to cancel Christmas. Her daughters took it well, but her son was a little upset. Seaman said she tried to reassure her son that he would still get presents for the holidays.

She heard about the application process and the organizations through a neighbor and, later, her son’s preschool. She plans to tell her children they are getting a Christmas tree but will save the surprise of gifts for Christmas morning.

Her children will receive toys and clothing.

Sonia Pleitez has been a volunteer for about five years since the bureau returned after a hiatus. She knew a lot of Hispanic families in the community would need someone to translate, so she stepped in to help.

“I knew there was a lack of communication, so I decided to come help out,” Pleitez said.

In addition to helping during the Christmas Bureau application process, Pleitez volunteers to translate in the school system through the Communities in Schools program.

Rowan County United Way Executive Director Bob Lippard said the bureau is a way that volunteers can allow the providers to focus on providing services to people in need.

Barry Hill, United Way board vice president of allocations, said the time when applications are being accepted ushers in the holiday season.

“It’s good to be part of helping the community because in the blink of an eye, the roles could be reversed. It’s just good to give back, and Rowan County does a good job of that,” Hill said.

Those who apply for help need to bring the following kinds of information:

• If the ID is expired, bring a lease and utility bill.

• A birth certificate for all children 12 and younger.

• Proof of all income and expenses.

• A Food and Nutrition verification letter.

• Custody papers, if the person applying is a guardian.

The application process includes help through the following agencies:

• The Salvation Army, which provides gifts for children through its Angel Tree program. Residents can choose a tag with the name of a child’s wishes and then buy a gift that is dropped off at the Salvation Army.

• Operation Santa, which is through the Arc of Rowan and provides gifts for qualifying families who have children with developmental disabilities.

• The Salisbury Post Christmas Happiness Fund gives eligible parents and guardians a voucher to shop for their children’s Christmas gifts themselves. The money for the vouchers is donated by Salisbury Post readers.

• Project Santa is based at First Baptist Church of Denton, which provides toys for school-age children, clothing and food to families in need on Christmas Eve.

SALISBURY — What did seventh-graders in 1992 find important enough to preserve for decades? A VHS videotape of “Home Alone,”... read more