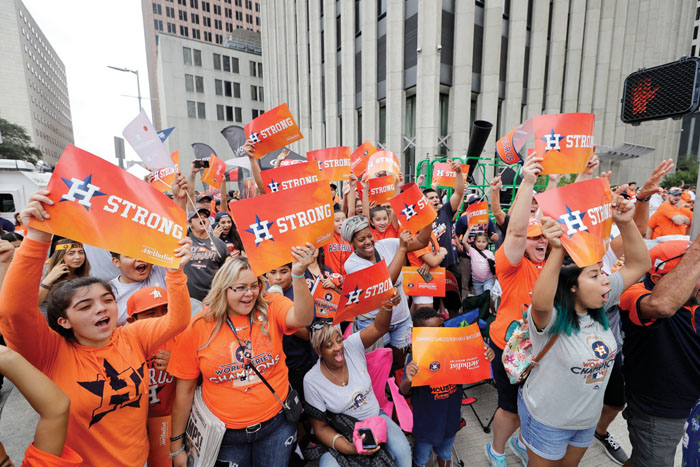 HOUSTON (AP) — World Series MVP George Springer planted the Houston Astros’ championship trophy at the front of a fire truck to a cheering crowd as the team began their victory parade Friday, with orange and blue confetti raining down as they passed tens of thousands of fans in downtown Houston.

Four military jets soared above a sea of orange and blue T-shirts, jerseys, pennants and banners along the 20-block parade route, which was quickly extended to accommodate the larger-than-expected crowd. Fans stood more than 10 rows deep, with chants of “Let’s go Astros” echoing off skyscrapers, while some claimed bird’s-eye views from the upper floors of parking structures, draping banners down the walls.

“This is amazing. This is awesome,” General Manager Jeff Luhnow said from atop a float that carried a giant baseball. “Everybody is smiling. We’ve been excited all day.”

Several Astros players and manager A.J. Hinch waved at fans from the top of a double-decker bus as the parade started. Some fans threw caps and jerseys in their direction. Players autographed the items and tossed them back.

Scored of fans had gathered downtown hours ahead of the parade’s start, including Manuel Mejia and his 15-year-old son, Jonah. They snatched a key spot along the route by 9 a.m. and set up four folding chairs at a street corner to be able to see the start and end of the parade.

“I’m just trying to get a good spot. It’s going to get packed,” the 43-year-old father said before the parade began, noting he’d been an Astros fan since his father took him to his first Astros game when he was 8 years old.

But he and other fans said the World Series win is great for all of Houston, as the city continues to recover from Harvey and the devastating rains and flooding that followed the late August storm.

“We needed this win real bad for the city of Houston,” said 47-year-old LaShawn Harris, who lives in the suburb of Baytown. “Harvey is gone. Harvey is smashed. Harvey is no more. It is all about today.”

Harris, dressed in an orange Astros T-shirt and cap, and a fanny pack with gold-colored sequins, said she got up at 5 a.m. so she, her two nieces and her granddaughter could get to the site of the parade and rally in front of City Hall and get “a good spot.”

The Astros took home their first championship in franchise history with a Game 7 win Wednesday in Los Angeles against the Dodgers. Playing for a city still recovering from Hurricane Harvey, and wearing an “H Strong” logo on their jerseys, the Astros won the title that had eluded them since they started out in 1962 as the Colt .45s.

The parade is the first championship for professional sports team in the city since the Houston Rockets Rockets won back-to-back NBA titles in the mid-1990s. The 1995 Rockets parade attracted an estimated 500,000 people.

The Houston school district cancelled classes on Friday so students, staff and their families could attend the parade. And the city’s public transit agency waived all fees and people were encouraged to use public transportation because parking downtown was limited.

Many underground garages remain closed because of damage caused by the flooding that devastated parts of the city after Harvey.

Sign up for the AP’s weekly newsletter showcasing our best reporting from the Midwest and Texas: http://apne.ws/2u1RMfv