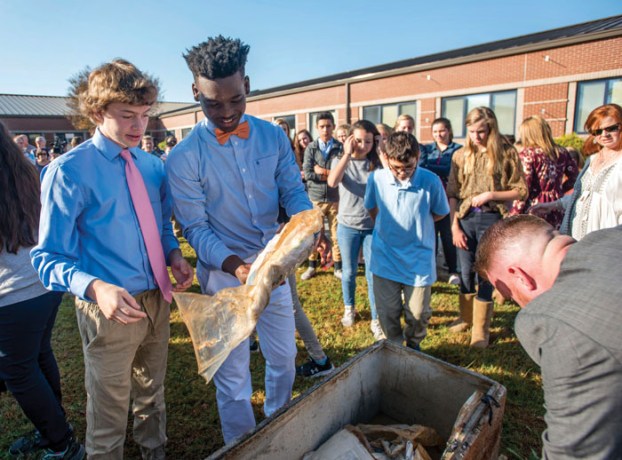 SALISBURY — What did seventh-graders in 1992 find important enough to preserve for decades?

A VHS videotape of “Home Alone,” a pair of jeans, a mix tape featuring “Baby Got Back” and “Bohemian Rhapsody,” a report card full of As and Bs, blackboard chalk, a plastic lunch tray, a favorite shirt and a yearbook.

Current and former students mingled at West Rowan Middle School on Friday morning to crack open the past, unearthing a time capsule put together by one of the seventh-grade teams in 1992. Items were sealed and buried in a stone sarcophagus in the parking lot of the then brand-new school off of U.S. 70.

A few items 7th graders in 1992 wanted to immortalize. pic.twitter.com/tICyMTKSiu

Linda Deaver, whose class came up with the idea, said the capsule was dedicated on the last day of school at the old junior high in Cleveland and buried over the summer at the new school.

In 1992, Deaver was a seventh-grade social studies teacher on the school’s Shark team. She vividly recalls the lesson that started it all: ancient Egypt and common burial practices.

“Wouldn’t it be neat if we could do a time capsule?” one student piped up.

The class became enamored with the idea, and Deaver said she would look into it.

“And it snowballed from there,” she said.

Soon, the entire school was involved, contributing items and working up excitement for a day 25 years into the future.

“I told them when they opened it to come get me out of the nursing home,” Deaver recalled with a chuckle.

Fortunately, she said, a quarter century later found her hale and hearty and ready to take a peek at the past.

“This is an amazing day,” she said.

In 1992, items were laminated or sealed in Ziploc bags to protect them, a precaution that proved fortunate. Maintenance workers said the stone time capsule was full of water when it was unearthed.

Thanks to Deaver’s foresight, students were able to look at maps, old photo albums, school newsletters, 1992 Winter Olympics guides and handwritten essays about where students thought they’d be in 25 years.

For some, the time capsule has become a generational tradition. Randy Roberson was a student at West Middle in 1992, and his daughter, Kara, is currently a sixth-grader.

“It’s kind of cool to have that connection,” he said.

A good number of the original students were present Friday, in town for their 20-year high school reunion to be held today. For many, the memory of the time capsule is fuzzy, lost to the stream of years.

“I do remember burying it; I don’t remember what’s in it,” Tiffany Phifer Dubose said.

But she did remember her item: a squeeze water bottle emblazoned with the Charlotte Hornets mascot. Phifer Dubose laughed as she remembered the item, saying it was fitting because the Hornets left, then came back. Just like the class.

Many of the items buried have become obsolete, like brochures and items from Blockbuster video stores or a stack of home movies.

“I don’t think we were thinking no one has a cassette player or VHS player,” Phifer Dubose said.

For some, current times didn’t live up to the hopes of 1992.

“We should have had flying cars now,” current Principal Derek McCoy joked.

But advanced technology or not, Friday was about honoring the past and looking toward the future.

The new time capsule was donated by Powles-Staton Funeral Home in Rockwell.

Train stalled on railroad tracks for more than 30 hours

SALISBURY — A train that has been blocking the Brenner Avenue railroad crossing for nearly two days, much to the... read more