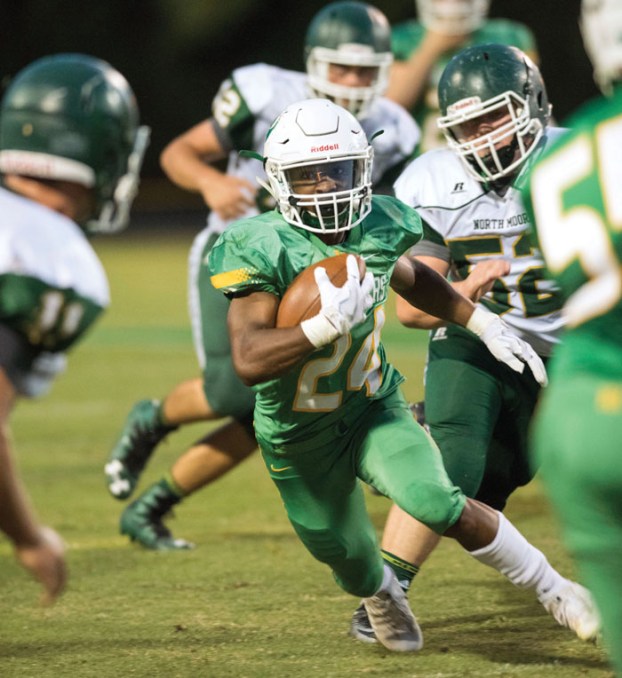 This one has been anticipated since the 2017 schedule was released. Scott Young, the head coach of three West Rowan 3A state champions (2008-10) is now a Statesville assistant. When West Rowan’s current seniors were freshmen, he was their head coach.

Moreover, Young’s son, Bryant, who began his career at West Rowan, is the quarterback of the Greyhounds. Bryant has had a fine senior year — 1,614 passing yards and 15 touchdowns. Against Carson and East Rowan the past two weeks, Bryant was at his best — 34-for-47 for 466 yards and seven touchdowns, with no interceptions.

While the Youngs will be an interesting sub-plot, the primary story is going to be about what happens on the scoreboard between the Falcons (6-4) and Greyhounds (8-2). While West Rowan is the unofficial county champion, this game is going to determine how long of a shelf like West has in the 3A state playoffs.

If the Falcons win, they take second in the North Piedmont Conference behind South Iredell, and they’re probably looking at a No. 6 seed in the 3A West bracket and the favorite’s role in a first-round home game next Friday. If Statesville wins, the Hounds get second. West won’t plummet out of the playoffs, but it will fall into the wild-card muddle where seeds are determined by MaxPreps rankings. Projections have the Falcons as a lowly No. 15 seed  — that means you play at the No. 2 seed — if they lose tonight.

ADM figures were released this week. Statesville’s Average Daily Membership number is 1,331 students, so the Greyhounds are headed to the 3AA playoffs. West has an ADM of 1,075 students.

There may be puzzlement over the tweaks to the playoff structure. It starts with figuring out the 64 qualifying teams in 2A and 3A and 48 qualifiers in 1A and 4A. That’s different, but there are a lot more 2As and 3As this year and fewer 1As and 4As.

The conferences get automatic berths based on their number of teams, with the area’s three six-team leagues and the eight-team Yadkin Valley Conference getting two berths and the nine-team Central Carolina Conference getting three. Salisbury, which has wrapped up third place in the CCC, is in the playoffs. Since the CCC is the lone 2A league with three playoffs berths, the Hornets know almost exactly where they’re going to be seeded. They’ll be seeded behind all the 1s and 2s in the 2A West, but they’ll be seeded ahead of all the wild cards. They project as the No. 8 seed, which would mean a first-round home game.

Salisbury’s ADM, by the way, is 837. They were in the 2AA playoffs not that long ago, but the Hornets have gotten smaller.

After the automatic conference automatic berths are decided on the field, MaxPreps determines the wild cards needed to fill out the bracket. MaxPreps ranked North Rowan higher than West Montgomery — and that’s just one example — before last Friday, so this is obviously not a perfect system.

Next the teams are divided into East and West. That’s strictly geography, although occasionally it’s mind-boggling geography. We’ve had East Rowan-South Brunswick and Salisbury-Pasquotank playoff matchups in the first round, in case you’ve forgotten.

The NCHSAA system has loopholes. Most are caused by the split conferences that include teams from two different classifications. South Caldwell is 1-9 and probably is going to finish 1-10, but it’s  still headed for an automatic berth in the 4A playoffs. Projections have South Caldwell as the No. 2 seed and getting a first-round bye. No kidding.

ADM figures for South Rowan (976), East Rowan (1,009) and Carson (1,323) weren’t surprising. None of those three teams appear in any playoff projections even if South and/or Carson springs an upset for a fourth victory tonight. It was more fun when four wins gave you a lot of hope and a pretty good chance to get in.  MaxPreps still ranks East Rowan ahead of Carson (slightly), which is interesting.

North Rowan (ADM: 605) got sacked five times, turned it over three times, allowed 345 rushing yards and lost to a team that didn’t complete a pass last week at West Montgomery, so the Cavaliers (7-3)  will be looking to redeem themselves tonight. While they’re no longer in the hunt for an automatic playoff berth, they’re in the 1AA playoffs as a wild card. Even as a wild card, they still project as a No. 8 seed with a first-round home game.

A.L. Brown (ADM: 1,590) is headed for the 3AA playoffs. The Wonders are playing for the South Piedmont Conference’s No. 2 berth tonight, but if they’re upset by the Spiders, Concord, 0-2 in the league not long ago, would get that automatic No. 2 berth, and the Wonders (8-2) would be relegated to wild-card status. Concord (5-5)  is playing hard down the stretch for retiring head coach Glen Padgett. If the Wonders win tonight, and they should, they project as a No. 6 seed.

While Davie County (ADM: 1,731) fell flat last week, miserably mauled in a game that just about everyone believed was a toss-up, the War Eagles (4-6) still are on track to be a 4A West playoff team. They have a strong MaxPreps ranking due to strength of schedule and project as a No. 9 seed as a wild card.

Picks were 6-1 last week and 48-11 for the season. The picks faltered pretty badly on A.L. Brown-Robinson.

Salisbury won this matchup 33-9 in 2016 when a lot of people were talking about a South upset. Salisbury leads the series, 18-7. South accepted a forfeit from Salisbury following the 2015 season, but the Raiders haven’t won on the field against Salisbury since 2009. Salisbury has handled several teams that whipped South. East Davidson and Lexington, for instance.

A guy who doesn’t particularly like Carson coach Joe Pinyan told me the other day that Pinyan should be the county coach of the year for what he’s gotten out of his team. Carson has been more competitive than anyone expected back in August, but the Cougars are up against a powerhouse tonight. This is the first meeting of the schools.

While the Greyhounds have a better overall record, Statesville’s eight wins have included three miraculous ones, and the schedule the Greyhounds played was easier than West’s. West demolished Carson last week, while Statesville was fortunate to beat Carson two weeks ago. I think the Falcons grab second place, although it may be quite a fight. Statesville won the last meeting in 2012, but West has won 12 of the last 14 and leads the series, 12-6.

Give South Davidson credit. It looked like they might not even have a team this year, but they’ve won twice and beat Chatham Central last week. Still, the last time the Wildcats played North Rowan they were the hapless victims in a 74-0 romp that broke school records. That was in 2012. North leads the series 4-0.

This rivalry means so much that reasonable people have chosen to start keeping score at different times. Some start with the first Concord-Kannapolis meeting in 1924. Some start with 1931 when it became a series that has continued annually right through tonight. That’s 86 years. Some started keeping score when the towns began playing for a railroad bell in 1950. Other start with 1952, the first year of A.L. Brown High School. Some count the three playoffs meetings, of which A.L. Brown won two. Some don’t.

The Post has it 44 for the Spiders, 42 for the guys in Kannapolis, with four ties. While it’s been an amazingly even overall series, both towns have enjoyed runs of dominance. Concord ruled the 1940s and 1960s. The Wonders had their way in the 1950s. Actually since 1970, the series has tilted toward A.L. Brown, with the Wonders holding a 31-19 edge. And speaking of 31-19, that also was the score when A.L. Brown won on opening night in 2016.

It’s Coach Padgett’s last game coaching Concord, so it may even more emotional than usual, if that’s possible. And there’s a lot riding on it — second place in the SPC.

Davie romped 39-7 in 2016 and holds a 5-2 lead in the series. Coming off an ugly one, Davie should bounce back on Senior Night.

From staff reports Salisbury’s jayvee football team prevailed against South Rowan, 20-14, on Thursday. The Hornets rallied from a 14-0... read more