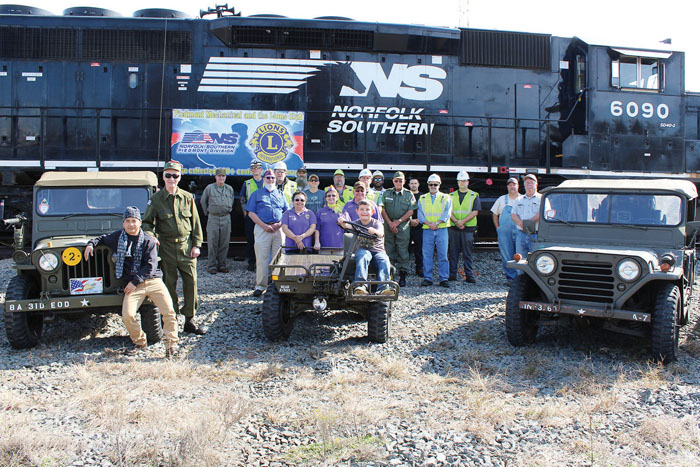 LINWOOD — Since July 1, Norfolk Southern railroad and the Lions Club have collaborated to honor employed veterans.

The organizations have been collecting winter coats to be distributed across the state through Veterans Affairs hospital programs.

As of Wednesday, more than 280 coats had been collected from Lions Clubs, churches and individuals across the state. Participating clubs include North Wilkesboro, Cleveland, Salisbury, Troutman, Kernersville and Gold Hill.

The coat drive ended Wednesday at Linwood Yard, where veteran employees were treated to a meal of barbecued chicken, baked beans, hushpuppies and banana pudding.

Michael Ratliff of Norfolk Southern addressed the veterans as they finished their meal.

“We thank you for your service and dedication,” he said. “We appreciate everything that you do for us and what you have done for us through your service.”

The drive came about as a collaboration between Morris Van Vleet of the Gold Hill Lions Club and Lee Burton, a carman at Norfolk Southern. Burton’s mother, Nancy Burton, was a good friend of Van Vleet and his wife, Linda.

The pair helped Burton after his mother’s passing. They dedicated the drive to their late friend.

“With all that you guys have done, we’ve had coat drives from North Wilkesboro all the way to Kernersville,” said Morris. “I’m just so proud to be a part of it. You guys have done fantastic, and we really appreciate you so much.”

The Van Vleets have a special place in their hearts for veterans. Morris is an Army veteran, and Linda works with Cloe Zemke to host monthly bingo parties at the VA hospital.

Morris felt the display served as a tactile representation of veterans’ service.

“This represents all the veterans. Some of the vehicles were in the Second World War, some were in Korea, and a little bit more up from that,” he said. “The guys that drove these, that’s the ones that we should be honoring.”

Linda Van Vleet agreed, speaking at length about the joy she gets visiting with veterans during their parties.

“They’re forgotten. They’re just forgotten people. It’s like respecting our elders,” she said. “… (T)here’s a lot of people out there that gave us this country. We need to appreciate that.”