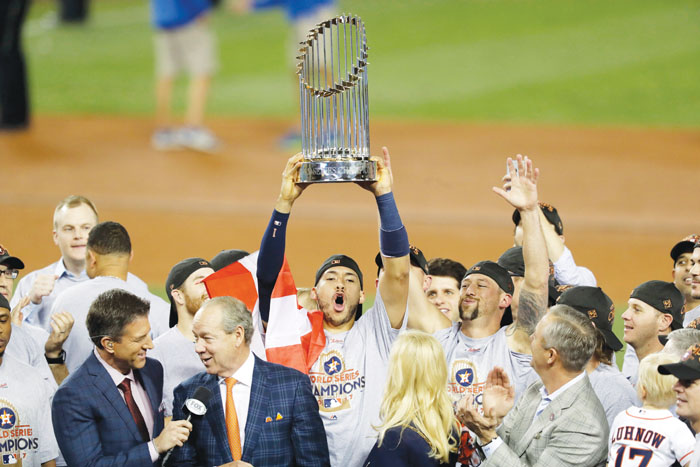 The Houston Astros' Carlos Correa celebrates with the trophy after their win against the Los Angeles Dodgers in Game 7 of baseball's World Series Wednesday, Nov. 1, 2017, in Los Angeles. The Astros won 5-1 to win the series 4-3. (AP Photo/Alex Gallardo)

HOUSTON (AP) — It’s not just one World Series title that has Houston excited. With Jose Altuve, Carlos Correa, George Springer and more locked in for years to come, the Astros are ready to be a force for some time.

Houston’s plan to endure a difficult rebuild has put the team in a great position moving forward. No player in Houston’s starting lineup for Game 7 of the World Series will be free agent earlier than 2019.

Alex Bregman and Yuli Gurriel are under team control until 2023, and All-Star shortstop Correa can’t hit free agency until 2022. Springer, the World Series MVP, is under control through 2021, and promising young starter Lance McCullers Jr. is under team control until 2022. Altuve has team-friendly club options for the next two seasons that will keep him in town through 2019 at least.

While everyone else is chasing high-priced free agents, Houston should be set, especially after acquiring ace Justin Verlander on Aug. 31 from the Detroit Tigers. Verlander is owed $56 million over the next two seasons combined before possibly becoming a free agent.

All of that was made possible by patience from owner Jim Crane and general manager Jeff Luhnow. The Astros were the laughingstock of baseball after trading away their veterans to shed payroll, losing 100 games every year from 2011-13, including a franchise-worst 51-111 mark in 2013.

With the losing came a bevy of high draft picks, and Houston hit big on a few of them. In Luhnow’s first draft in 2012, Houston took Correa with the first overall pick and nabbed McCullers at 41st overall. Then in 2015, they grabbed Bregman with the second overall pick.

They weren’t without their misses. Most notably Mark Appel, who they famously drafted first overall in 2013. The right-hander never played for the Astros and was eventually traded, while Kris Bryant, who Houston passed on to take Appel, won National League MVP and helped the Cubs win the World Series last season.

Only four players on the World Series team were around for any of the 100-loss seasons, and Altuve was the only one with Houston for all three.

Altuve said their encouragement and seeing the pieces slowly come together helped get him through the difficult times.

“(I was like) ‘OK, let me keep working hard. Let me get better every year and try to be part of the winning team,’” he said. “I always believed that we’re going to become good. Then I saw Springer get drafted, Correa and Bregman, and I was like: ‘OK, here we go.’”

The heart of this team, Altuve followed up a brilliant regular season where he led the majors with a .346 average by hitting seven homers and driving in 14 runs in the playoffs.

His work this year made him a front-runner to become the first Astro to be named MVP since Hall of Famer Jeff Bagwell won the NL award in 1994.

With Altuve returning to lead this team and ample talent around him, the young and confident bunch has plenty of reason to believe that this could be the first of many titles for a team that waited so long for the first one.

Bregman summed up the feeling of many after the Astros beat the Los Angeles Dodgers 5-1 on Wednesday night to give the city of Houston its first title since the Houston Rockets won two straight NBA crowns in 1994-95.

“I want to celebrate tonight, go back and have a nice little parade,” he said. “And then guess what? We’re going to go back, work our (butts) off, and do it again next year.”

HOUSTON (AP) — The largest school district in Texas has canceled classes Friday so students and staff can celebrate the world champion Houston Astros.

The Houston Independent School District on Thursday announced all schools and offices will be closed the next day to honor the Astros winning the World Series. The district has about 215,000 students.

Houston on Wednesday night beat the Los Angeles Dodgers 5-1 in Game 7 to claim the title.

Houston Mayor Sylvester Turner, via a website set up to celebrate the Astros , announced he’ll help host a parade and celebration at 2 p.m. Friday.

Hurricane Harvey hit Texas on Aug. 25, leading to heavy rain that swamped parts of Houston. Some downtown parking garages near the parade route are closed amid continuing Harvey cleanup.