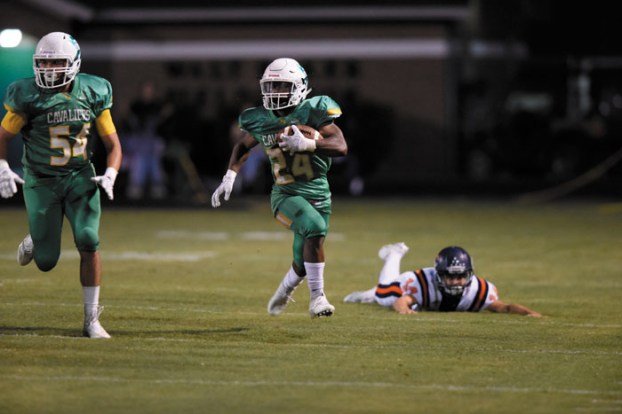 SPENCER — This one wasn’t supposed to be close. It wasn’t.

In what amounted to a tune-up for the state 1A playoffs, North Rowan used a balanced offensive attack to breeze past South Davidson, 49-0, here Friday night at Eagle Stadium.

Senior running back Jaleel Webster galloped for 240 yards and junior quarterback Willis Mitchell passed for another 133 as the Cavaliers celebrated Senior Night with a convincing victory.

North scored on its third play of the game, a beautifully thrown 36-yard pass from Mitchell to receiver Quintous Smith, and the Cavaliers never looked back.

The Cavaliers improved to 8-3 overall and 5-2 in the Yadkin Valley Conference. South Davidson ends its season at 2-9 and 1-6.

“We told our kids all week at practice to focus, finish and eliminate mistakes, regardless of your competition,” said North head coach Ben Hampton. “If you have mental mistakes and turn the ball over, it’s hard to win. But we executed tonight, like we can.”

Hampton had wanted to see some bounce-back from his team after two straight YVC losses (against North Stanly and West Montgomery). He got it.

“Unforced errors and mental mistakes took us out of those two games early and it was hard to get things going,” added Hampton. “Tonight, we executed. If you don’t, it doesn’t matter who you’re playing, it’s hard to win. So I’m happy with our team’s focus tonight.”

While the offense compiled 387 total yards and seven touchdowns, North’s defense did its part as well. The Cavaliers allowed just 37 total yards in the first half and one first down, and just 81 yards (all rushing) for the game. South quarterback Zaylen Stanley attempted just three passes and completed none.

“The defense’s challenge tonight was to put up a goose egg and they did,” said Hampton. “But South did almost run a kickoff back on us and special teams are going to be huge in the playoffs. That’s why we wanted to try a couple of field goals, to see how much range he (Jacob Young) had and to work on our blocking up front.”

Young, a senior who kicked six of the seven extra points and drilled most of his kickoffs into the end zone, tried a 56-yard field goal at the end of the half. It had the distance but was well to the right of the goal post.

In the second half, Young tried a 51-yarder that was well struck and right down the middle. But the football hit the center of the cross bar, bounded high into the air and fell to the ground on the wrong side of things.

“Unlucky bounce, could have gone either way,” said Young, who thought he was going for a school record. “It felt good off my foot and I thought I could do it, because the long one in the first half had the distance.”

Actually, the Rowan County record is 53 yards, kicked by North’s own Tracy Maynor against East Davidson in 1988. Maynor went on to kick at Catawba College.

North scored 28 of its points in the first quarter. After the nice Mitchell-to-Smith hookup, South’s Justin Duckett returned the kickoff 46 yards, the Wildcats’ biggest play of the night.

Two plays later, a bad pitch out was recovered by North’s Xzavier Davis at the Cavs’ 42-yard line. Eight players later, the Cavaliers were in the end zone again, thanks mostly to Webster, who had 41 yards on the drive. Mitchell scored on a one-yard plunge on fourth-and-goal.

As the Wildcats continued three-and-outs for the rest of the half, North was piling up the touchdowns. Mitchell hit Smith for another score, a 10-yarder, and then connected with Webster on a 15-yard screen pass for a score.

Mitchell opened the second quarter with a 21-yard strike to receiver Stanton Bailey and three minutes later, Webster got loose for a eye-popping run of 32 yards and another TD.

Webster had 177 yards on 16 yards at halftime, as the 42-0 lead meant there would be a running clock for the rest of the game.

“With a running clock, there wasn’t any reason to leave him (Webster) in there, so I told him he could have one series and he’d be coming out,” said Hampton.

Webster made the most of the opportunity. The 5-6, 160-pound dynamo went 63 yards on a dazzling, weaving and tackle-breaking run, before being brought down at the South 11-yard line. After his last carry went for no gain, Webster came out.

“Webster made a spectacular run and almost scored, so we got him out,” added Hampton. “He’s special. If we get that kind of effort out of him next Friday night, I like our chances.”

Webster’s 240 yards gives him 1,307 for the season, with the stats from one of the games unavailable.

Gavin Kuld, who had replaced Mitchell at QB, connected with Russell Bacon on a 7-yard pass play, setting up a 4-yard TD run by Kareem Miller, ending the scoring.

Mitchell was 8-for-11 passing for 133 yards and a career-high four touchdowns. Smith’s two TD catches went for a total of 46 yards.

A.J. Haltom led the Wildcats with 27 yards on the ground, all of it coming in the first half. He was also the South punter and had to kick the ball away seven times.

North never had to punt, but saw drives end with the two missed field goals and one bad snap that went for a fumble recovery by South linebacker Ty Moore.

NOTES: Davis, Matthew Hoosier and Tyzai Lyles were in on numerous tackles for the North defense. … J.D. Weaver kicked one of the extra points.