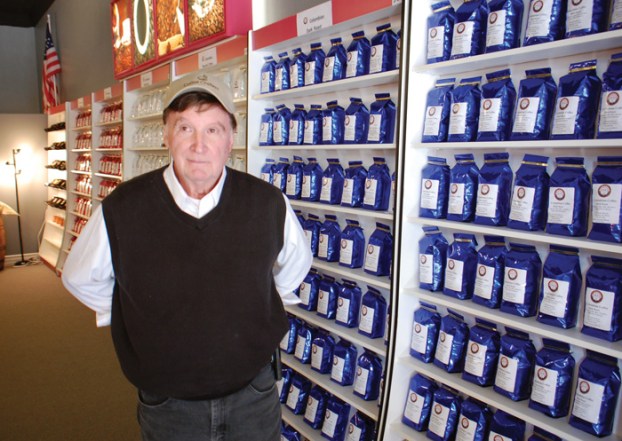 SALISBURY — An unabashed love for the military has led Albert Shinn to his newest venture — a store that sells coffee.

Think of how coffee — good, bad or otherwise, Shinn says — has been intertwined with the stories of fighting sailors and soldiers through the years. One theory goes that the description of coffee as a “cup of Joe,” for example, is a reference to onetime Secretary of the Navy Josephus “Joe” Daniels.

Daniels banned the serving of alcohol on Navy ships in 1914, leading sailors to drink more coffee. They blamed Daniels for the change and sarcastically nicknamed the coffee they drank in alcohol’s place as a cup of Joe.

But for Shinn, the idea to sell coffee and maybe help veterans in the process stems from his family with strong military ties and a job with Braniff Airlines he had during the Vietnam War.

Shinn says he was among the Braniff employees who met with families as soldiers’ bodies returned to the States. That kind of experience will stay with you.

So after selling his longtime building company and assuming a role as its consultant, Shinn has turned his focus to giving back. His new store, Veterans Coffee at 210 S. Main St., will open for the first time from 10 a.m. to 6 p.m. Saturday.

The store will sell Colombian coffee by the bag and in K cups, which are available in 10- and 12-count packages. You can sample coffee in the store, but otherwise it’s not a coffee shop where you come to drink coffee.

With Mary Bost as manager, the store also will sell other items such as gift baskets and mugs, military ball caps, handmade soaps, sugar spoons, cookies and snacks.

Veterans Coffee will offer a 10 percent discount to veterans and their families. Active military personnel are covered, too.

“I don’t need any identifications,” Shinn says. “If they’ll tell us, they’ll get a 10 percent discount.”

In the downtown store, Shinn has roughly 1,500 pounds of coffee on display and ready for purchase.

“My idea was to do red, white and blue and cater particularly to the military,” Shinn says. “That’s what we’re all about here, brother.”

Shinn also has been talking with the Hefner VA Medical Center in hopes he can supply free coffee in a waiting area or two at the hospital. “Wherever we can and how much we can, that’s how much we’ll donate,” Shinn says.

Shinn describes his product as representing some of Colombia’s best beans — a “quality, No. 1 coffee” that has a clean taste because it’s roasted over electricity, not gas. He does not offer decaffeinated coffee. “I don’t even fool with that,” he says.

Natives of Mount Pleasant, Shinn and his four brothers all volunteered for the military, either with the Navy or Army. Albert says the family represents 101 years of military service. The Shinn brothers included Don (Navy), Ed (Army), Mike (Navy), Albert (Army) and Malcom (Navy).

The other four Shinns served in Vietnam and fashioned careers out of the military. Albert says the medals they received and the photographs of the Shinns serving the country would fill an entire wall at the store.

Albert himself did not have a tour in Vietnam. Trained as a medic, he was part of the 82nd Airborne Division at Fort Bragg and also spent time, he says, at Fort Sam Houston, Fort Richardson and Fort Jackson. Counting his time in the National Guard, Albert had four years of military service.

All of his intensely patriotic brothers survive except Ed. “He’s an awesome hero,” Albert says. “We didn’t realize what a hero he was until we lost him.”

Albert Shinn is a multifaceted man who probably is worth several stories.

As an ambulance attendant for a funeral home in Dallas, Shinn says, his actions saved the life of a man who was shot in the head only a couple of months after President Kennedy’s assassination. That same man had spotted Lee Harvey Oswald the day of the assassination and chased after him for a while before losing his trail in a Dallas neighborhood.

There was another time, Shinn says, when he was part of a convoy delivering equipment from Guatemala into El Salvador when it was ambushed. Several men died, according to Shinn, and he can show you the scars from being shot in the shoulder and leg and patched up with 300 stitches.

Shinn made his business mark by founding Shinn Buildings in the early 1980s. He went on to supply pre-engineered building systems for roughly 1,000 lube centers, car washes and dealerships over the years.

The company is based in Albuquerque, New Mexico. Shinn says he maintains homes in Dallas and Mount Pleasant.

Shinn also is a commercial pilot and has had three different hot-air balloons over the years, including his present one, the Carolina Eagle. One thing he has done for veterans in the past is tether the balloon about 30 feet in the air, then project photos of them and their families on the side.

Veterans Coffee will be open from 10 a.m. to 5 p.m. Tuesday through Saturday and closed Sunday and Monday.

Shinn chose a Salisbury location for Veterans Coffee for reasons that include the strong veterans population in Rowan County, the VA Medical Center and a love for the town going back to childhood.

He remembers the Schwinn bicycle his father, Waldo Fink Shinn, bought for him at Bernhardt Hardware when Albert was 13. His dad was a sign painter for 70 years, and Albert would often accompany him on jobs that took them all over the region.

Veterans Coffee’s manager, Mary Bost, lives in Cabarrus County but she was born and raised here and feels she’s back home. “I have a great fondness for Salisbury,” she says.

Gaynell Gibbons, one of Bost’s aunts, operated a beauty shop in Salisbury. Her Aunt Claire was a longtime employee of Earle’s Office Supplies, and her grandfather was a freight engineer over 51 years for Norfolk Southern Railway.

Bost is blending in small tributes to them as part of the store’s overall interior design.

Bost’s daughter, Megan Bost of Mount Pleasant, made the Dolly Doe Soaps that are being sold in the store. Some are coffee-scented.

Shinn says he hopes this is just the first of many Veterans Coffee stores in the future.

“I want to spread out from here,” he says.