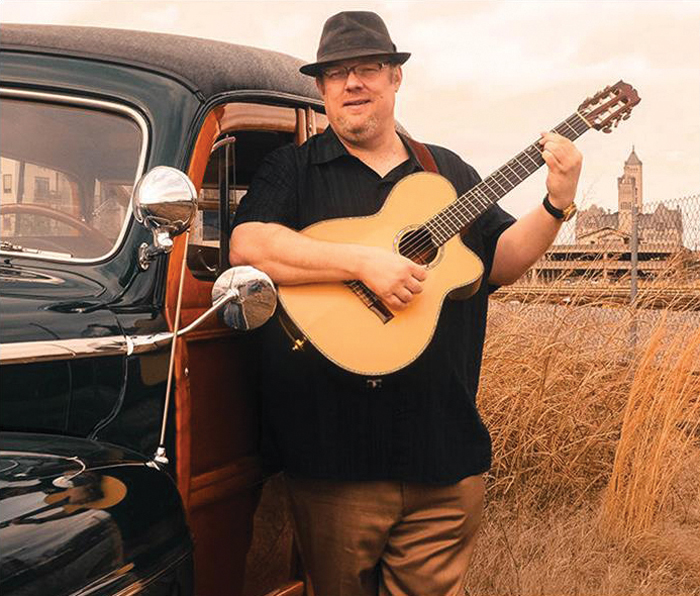 A guitar workshop with Richard Smith will be at 3 p.m. Sunday before the concert. $15 at the door for each event.

Most 11-year-old kids spend their time riding their bikes, playing sports or hanging out with their friends at the local mall. Richard Smith did all of these things, but he was also spending much of his time developing a rare musical talent, one that would eventually take him on a fantastic lifetime journey.

Born in the small English village of Warlingham, in Surrey county, less than 15 miles south of downtown London, Richard first picked up the guitar at 5 years old, after listening to his father play a blues tune. His dad and brothers tutored him, and he soon became a child prodigy, devoting himself to learning the fingerpicking styles of Merle Travis and Chet Atkins.

In the early 1980s, while Chet was performing in London at Her Majesty’s Theatre, he invited young Richard up on stage to play with him. After playing a duo on one of Chet’s tunes, he was allowed to solo on a second song, to which he received an overwhelming ovation from the crowd. This experience and opportunity to be mentored and nurtured by a guitar legend was not lost on Richard, and he and Atkins grew to become fellow musicians and lifetime friends. Chet would later write of Richard, “He can play anything I can play — only better.”

Since then, Richard won the National Fingerstyle Guitar Championship, and has played in thousands of concerts across the U.S. and internationally. He performs solo and in various combos of musicians, including a guitar/cello duo with his wife Julie, and with his six-member jazz/swing band The Hot Club of Nashville, which features five-time “Best Jazz Artist” award winner Annie Sellick. He also operates his own recording studio in Nashville.

Richard returns to the Salisbury area for the third time, having twice performed to overflow crowds for the Cheerwine Music Hour series at the Rowan Public Library. He will be joined on stage by talented singer and songwriter Kevin Neidig from Harrisburg, Pa. Kevin is a multi-instrumentalist, a winner of first-place competition awards in guitar, banjo, and vocals, and also plays mandolin, bass and ukelele.

Guitar Workshop with Richard Smith — 3 p.m. Sunday before the concert. $15 at the door for each event.

Advance tickets for both shows are still available through the venues or online at iTickets.com or by calling 800-965-9324. Advance $12 or at the Door $15. Special group rate ($10) for church or community groups of 10 or more. See the concert event pages on facebook.