‘Next to Normal’ is extraordinary 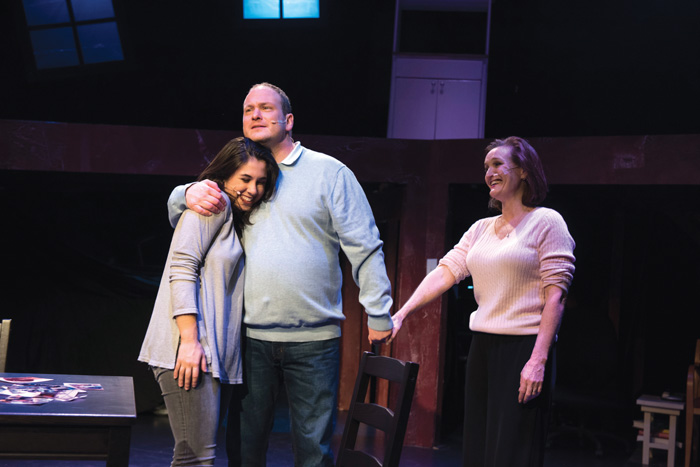 “Next to Normal” is an engrossing rock musical that wrenches emotional reactions from the audience, from laughs to cathartic tears.

The Lee Street Theatre production, with several actors from CataLst, a collaboration with Catawba College, is powerful, with an exceptional cast that completely inhabits the characters.

The music ranges from sad lamentations to blasting rock ‘n’ roll fury and is played by an excellent small orchestra.

Mother Diana is suffering from bipolar disorder, depression and a host of other challenging mental health problems. Wendy Weant beautifully portrays all those stages of mental illness, from euphoria to grief to anger to self-destruction. Each night must take a toll on her physically and mentally.

Thomas Foster’s Dan is breathtaking. Foster’s experience in the theater, his intensity, his complete trust in the character, the music, his fellow cast members, shows. Foster was great as Edward Bloom in Lee Street’s “Big Fish.”

Operatic in nature, “Next to Normal” is told mostly through songs. And there are some in this show that will blow you away.

Foster has several searing numbers in which he declares his love for his wife and family and insists he is doing what’s best for all of them. He can hit high notes that will break your heart.

Larissa Garcia, a Catawba student, is fierce as Natalie, the daughter who believes she is invisible. Watching her go through the pain and anger her mother’s illness brings on is riveting. Garcia’s voice is particularly solid, as she has to belt out some deep anger herself.

Randy Stull plays her stoner boyfriend, Henry, the one gentle soul in the mix, a teenager more interested in healing than diving down to the depths. He, too, is a Catawba College student.

The third student is Jacob Hammil, who plays Gabe. The power of his role and his performance is haunting. He’s an angry, needy young man who won’t be ignored.

Tim Campbell proves again how versatile he is as Dr. Madden, Diana’s latest psychiatrist. The scene when Diana and the doctor meet is Jekyll and Hyde, with Diana seeing one scary thing after another and the doctor calmly asking questions.

This group of actors is so cohesive you will never doubt their long-standing relationships as an abnormal suburban family. Like Weant, they must be emotionally wrung out by the end of the show.

Director Craig Kolkebeck deserves a lot of credit for pulling this together, picking the right cast and creating an evening of theater that you won’t forget.

A shocking plot development will stun the audience every night. It is essential you do not know what it is before you enter the theater.

Chris Speer did another great set and lighting design, with minimal staging that has a big impact.

This is not a play for children. Characters utter the usual obscenities, but it’s the shattering subject matter that will be too intense for them. Winner of 11 Tony Awards and a Pulitzer Prize, it is a show you should see, and there are not many seats in the theater this time. Get tickets soon.

Performances are at 7:30 p.m. today through Saturday and Nov. 9-11. Student Rush Night is at Nov. 8. Student pay $5 cash at the door when they present their student ID.