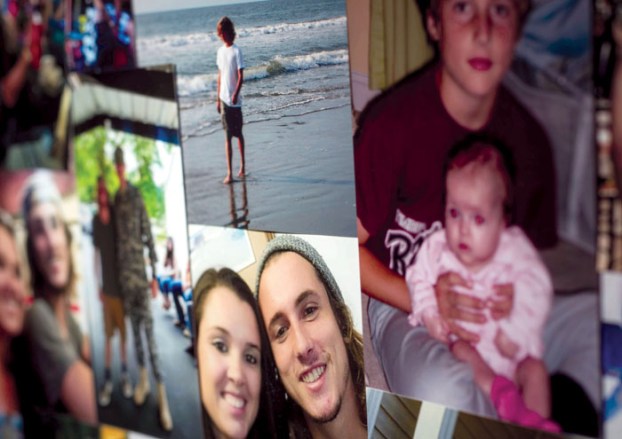 Hunter Brown died of a drug overdose 17 days before his 21st birthday. Hunter's mother Valerie and sister Stephanie Herge are open about the hurt they have endured with the loss. They have started a support group at Cornerstone Church called Rays of Sunshine for parents and family of people who are struggling with having a family member addicted to drugs. Jon C. Lakey/Salisbury Post Hunter Brown died of a drug overdose 17 days before his 21st birthday. Hunter’s mother Valerie (right) and sister Stephanie Herge are open about the hurt they have endured with the loss. They have started a support group at Cornerstone Church called Rays of Sunshine for parents and family of people who are struggling with having a family member addicted to drugs. Jon C. Lakey/Salisbury Post

FAITH — Valerie Belk carries her sons with her wherever she goes. Their fingerprints, embossed in silver, hang on a chain that falls over her heart.

Hunter’s fingerprints form a heart, and as Belk fiddles with the necklace, she says he was “my sunshine.”

His warmth and caring — along with the struggles he and the family went through in the final years of his life — inspired Belk and daughter Stephanie Herge to start Rays of Sunshine, an anonymous support group for families and friends of those addicted to narcotics.

“I wasn’t born and put on this earth to pick out two headstones for my sons and then be gone,” Belk said.

It’s a story that began with the death of Rodney, who was just 17. For Belk and the family, it was a hard blow. But Herge said tender-hearted Hunter, just 10 at the time, may have taken it the hardest of all. She remembers driving him home after Rodney was pronounced dead in the hospital.

“He was just crying in the back seat and said, ‘I wish I could take his place,’” she said.

When Hunter turned 17 — and finally became older than his older brother was — Belk and Herge think he faltered.

Belk said she has her suspicions that a friend with a prescription offered Hunter Xanax to help him deal with his grief.

“I think they were probably trying to help him. I think that’s probably when it started,” she said.

But without the pills, the grief and feeling of loss came back.

“So he found a way to turn it off,” Herge said.

Over the next several years, Hunter abused marijuana, alcohol, acid and prescription medications. But Xanax remained his “drug of choice.”

By age 18, Hunter had moved in with his girlfriend, and the separation left his family feeling powerless to help him.

“We all knew everything, but we were stuck and there was nothing we could do,” Herge said.

At the time, there were no support groups for families of addicts in Rowan County. The closest Nar-Anon groups were in Statesville or Charlotte, more than an hour away. For Belk and Herge, who had an almost full-time job trying to help Hunter, those groups may as well have been on the moon.

Hunter began selling drugs, totaled his car, dropped out of college and lost his job. Eventually, he was arrested. It was something Belk had been fearing for a long time; she knew addiction only ends in one of three ways.

“You either get clean, you go to prison, or you die,” she said.

Belk and her family saw the arrest as a chance to intervene. They helped Hunter get outpatient counseling and then to go to a rehabilitation facility in Lexington. There, he began to improve and even talked about becoming a counselor in the future.

“He was doing really good, but 28 days is not long enough,” Belk said.

It’s enough time to learn strategies and get started on healing, but not enough time to make true change, she said. The stress that pushes people to substance abuse is still there.

“It’s not a switch you can turn on and off,” Belk said of addiction.

After rehab, Hunter did well for a while. But in February, Valentine’s Day and Rodney’s birthday brought two difficult days, one after the other.

“He was just walking through the yard and fell down and had a seizure,” Belk said.

Paramedics administered Narcan, and Hunter was taken to the hospital.

In tears, Belk told Hunter that she didn’t “want to live without my sunshine.” Hunter cried and promised to do better.

But there was no help for him in the ER, Belk said. Once his vital signs returned to normal, a nurse told him to get dressed and go. He never saw a doctor, never got a referral and never got a follow-up.

As they walked out of the emergency room, Belk said she remembers hoping that someone would reach out.

On March 5, Belk got another call: Hunter had overdosed again, this time on the floor of a house in Enochville. When she got there shortly after paramedics did, Belk learned that Hunter had been unresponsive for hours but that the people he was with had not called 911 or Belk until it was too late.

After two doses of Narcan, Hunter was loaded into an ambulance and rushed to the hospital. Belk rode with him; she remembers that his heart stopped a few times during the ride.

“I just wanted to get close enough to look at his eyes,” she recalled.

If she did, she told herself, she’d know if he would make it or not. But when Belk lifted Hunter’s eyelid, “you could just tell he wasn’t there.”

He never regained consciousness, and shortly after Belk made the decision to take him off a ventilator. Hunter was just shy of his 21st birthday.

Belk and Herge said they don’t want that to be the end of his story.

“I don’t want Hunter to be defined by his death,” Belk said.

Instead, they want people to know Hunter as they knew him — a kind, sweet young man who loved to make people laugh and was full of compassion.

Even when struggling with addiction, Hunter was someone who went out of his way to help others — whether that was stopping to mow the lawn of an elderly neighbor or literally giving someone the shirt off his back.

“That’s just how he was; that’s just who he was,” Herge said.

A few months after Hunter’s death, they started Ray’s of Sunshine, a support group for local families struggling with a loved one’s addiction. Often, Belk said, parents are afraid to ask for the help they need — either out of embarrassment or to protect their child from stigma. But everyone needs help, she said.

“It’s like a full-time job just trying to help them help themselves,” Herge said. “And there’s not a lot of help for you.”

At Ray’s of Sunshine, parents, family members and friends receive support and caring.

“Everyone in our group is grieving the loss of hopes and dreams for their children,” Belk said.

They share their stories and learn about resources to help them and their loved ones. Belk has even invited a few medical professionals to help the group understand addiction.

It’s been a year since Rays of Sunshine’s first meeting, and Belk and Herge have seen people come and go in that time. But they stay, offering what comfort they can — and they let people know that addiction doesn’t make someone a bad person. It’s just a bad choice.

“It’s not your fault that they made this choice,” Belk tells parents.

She reminds them that they still have a life to live outside the rough waters their family is going through and that it’s important to take time to take care of themselves, too.

Too often, Belk said, she sees people sitting in a parking lot, hands gripping the steering wheel and trying to work up the courage to walk inside. Sometimes, it takes weeks before they’re able to open the door. Sometimes, they leave and she doesn’t see them again.

But the door is always open; and Belk is always waiting, Hunter’s fingerprints in hand.