Trunk-or-treat plays it safe for community celebration in Spencer 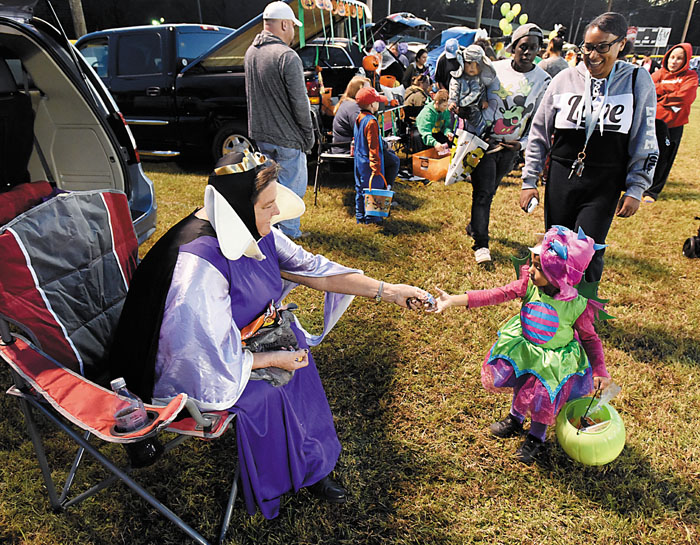 SPENCER — Ghosts, ghouls and goblins roamed the grounds of the Eighth Street ballpark Tuesday night, but town residents had nothing to fear as long as they paid the toll — a handful of candy.

It’s the second year Spencer’s Cal Ripken organization has hosted trunk-or-treat. Organizers said they were pleased with the success.

Families lined up outside the chain-link fence, waiting to be let onto the diamond. Roughly 40 cars lined up on the green, trunks popped open, spooky music slithering out of speakers. Thompson said that’s about double the number of cars participating last year.

It’s a community effort that Cal Ripken landed on a few years ago during a board meeting.

“We just decided we wanted to give back to the community,” Thompson said.

And it fits into the residents’ desire for a close-knit community.

“I see a big push from residents, businesses, churches and the government to promote the neighborhood feel again,” Thompson said. “To promote unity.”

For many attending, however, the event offered something unique to the Halloween trick-or-treating experience: safety.

She and son Kendrick Howie saw a banner for the trunk-or-treat and decided to check it out.

“He loves to trick-or-treat,” Doyle said.

The trunk-or-treat offered a good opportunity to make friends and for Kendrick to hang out with a lot of kids his own age.

Linda Miller, with Central United Methodist Church in Spencer, said the church used to host a similar program in Library Park. But cars driving by on the bordering streets were a serious concern.

“This is a lot safer,” Miller said.

Miller and other church members sat in front of baskets piled high with candy — all donated by the church.

“I think we need to do a lot more,” Miller said of activities like the trunk-or-treat. “We need to give the kids places to go that are safe.”

Other parents interviewed asked not to be named but said that at a trunk-or-treat, they didn’t feel like they would need to worry about something dangerous being slipped into their children’s candy.

Children poured onto the green, flowing down the lines of cars and showing off costumes under the bright ballpark lights.

“It’s one stop,” parent Miriam Walker said. “Don’t have to drive around.”

Next year, Thompson and Bates hope the trunk-or-treat will double in size again and that they’ll have enough cars to fill up both ball fields.