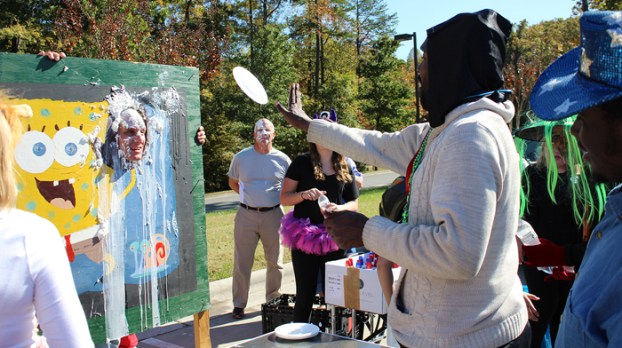 Andie Foley / Salisbury Post - Individuals involved with The Arc of Rowan line up to pie a willing few following an afternoon Trunk or Treat on the Rowan-Cabarrus Community College campus. The Arc sold these opportunities at a dollar per pie in effort to raise funds for United Way.

SOAR and the Arc throw pies for charity

SALISBURY — A trunk-or-treat hosted by Rowan-Cabarrus Community College’s SOAR program Tuesday capped the festivities with an innovative and giggle-inducing fundraiser.

For a dollar donation, you could throw a pie in the face of one of four willing victims.

Those who were being pied included Arc of Rowan Executive Director Shela Sapp; SOAR Director Jay Taylor; Craig Lamb, the college’s vice president of corporate and continuing education; and Juwan Bledsoe, a student in the SOAR program.

The fundraiser was a partnership between SOAR and the Arc, organizations dedicated to helping people with intellectual disabilities in Rowan County. Proceeds will benefit multiple organizations throughout the area.

Vehicles in the trunk-or-treat were manned by Rowan-Cabarrus Community College staffers. Participation increased markedly since the first celebration last year.

“Almost every department at Rowan-Cabarrus Community College was represented this year,” said Sapp. “Last year, we only had seven trunk-or-treat vehicles. This year, we had 27.”

The Halloween festivities offered a chance to snag free candy and treats. But that wasn’t all.

First- and second-place prizes were awarded for best costume and to the cars with the best decorations.

SOAR student Bryce Warden won first place in the costume contest as an enchanted tree from “The Wizard of Oz.” Second place went to Jennifer Jernigan, who came as a gumball machine.

In total, $201 was raised for United Way through the pie throwing.

More than 60 SOAR students were in attendance.

“The beauty of that is a lot of that came from the people in the SOAR program,” Sapp said. “It was just great. It was a community effort.”

Taylor similarly praised the collaborative effort and the college for its continued dedication to giving SOAR students equal opportunities and experiences.

“A huge shout-out of thanks and appreciation for all involved with making this such a special day for so many,” Taylor said. “We loved it.”

SALISBURY — If you thought carving a pumpkin at your kitchen table was tricky, imagine doing it 30 feet underwater... read more