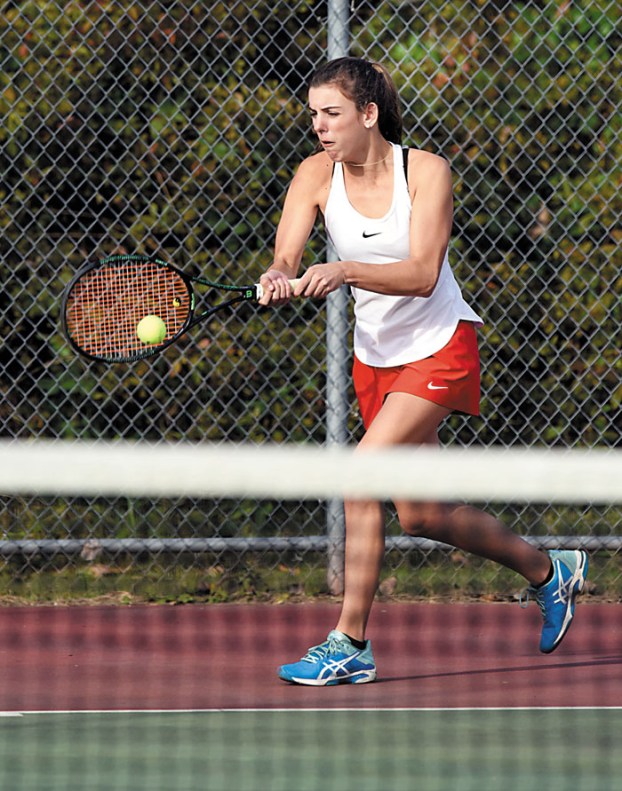 SALISBURY — Before the start of the 2A state playoffs, Milton Griffith had a propitious feeling about the Salisbury girls tennis team.

It’s beginning to look like the third-year coach was right. The Hornets’ post-season run has circled the bases and is heading for home following Wednesday’s fourth-round victory over visiting Lake Norman Charter — a 6-0 wipeout that pushed Salisbury into Saturday’s state championship match.

“I didn’t think we’d win four rounds and I definitely didn’t think we’d win them all in singles,” Griffith said after Salisbury (23-1) dethroned the three-time defending state champions. “I thought eventually we’d have to play doubles, but I never thought this would happen. I had a feeling if we could win four, five and six today, we’d have a fighting chance. Not only did we win them, we won at one, two and three as well.”

“I knew the situation and felt the pressure,” Nianouris said. “What made it easier is that I had faced her last weekend (in a state doubles match) in Cary and knew some of her strengths and weaknesses. I just tried to be patient, didn’t play particularly powerful and waited her out.”

It set off a lively celebration from the Salisbury faithful. “I don’t know how to describe it,” senior Maria Capito said after trimming Zoe Panizza — a state singles semifinalist — 6-2, 7-5. “But it’s the best feeling. Out of four years of high school, it’s the first time we’ve made it. And I’m signed up to take the SAT on Saturday, but I guess I’ll have to reschedule for next month.”

Griffith noted that Capito lost a match to Panizza a few years back. “Eighth or ninth grade,” he said. “I just told Maria, ‘Half the battle is in your mind.’ She put that behind her and realized she could do this. She got her mind right and played the match of her life.”

Capito hopes to go pre-med or pre-dental, but first hopes to lead the Hornets to their first state title since 2013.

“I think a lot of people doubted us,” she said, after erasing a 5-4, second-set deficit. “But we just played the matches out. Even if we were down, we’d keep our heads up and stay confident. Like today, I kept her moving around like windshield wipers, but she kept me moving too. Some of the balls I got to were luck. I don’t know how I got to all of them.”

“It was tiring, but very exciting,” Honeycutt said. “I had to be a backboard and let her keep hitting it at me, waiting for mistakes. I definitely had to stay focused the whole match. There was no break, but every time I looked down the line and saw my teammates all winning, it helped me stay positive.”

Other Salisbury winners included Lillian Rusher, Meredith Burton and Bethanie Stauffer at fourth, fifth and sixth singles. Rusher picked up on a pre-match tendency and used it to defeat Nithya Sampath, 6-2, 6-2. “In the warmups, I noticed she liked to hit everything hard,” Rusher said. “So I started hitting lobs, pushing her deep into the court, which took away the hard returns. It made it easier to control the match.”

Burton shook off some early jitters and swept past freshman Alicia Bush, 6-1, 6-2. “I was nervous at first,” she said. “Luckily, I overcame that. (Bush) kept trying to find ways to beat me — slicing it, lobbing it, anything she could do to win points. I was better.”

And Stauffer, the senior with a pending application to Stanford, breezed past freshman Jada Mbote, 6-2, 6-0, in the day’s quickest match. “It was a consistency thing,” she said with a warm smile. “She would take good shots. But I knew if I could just keep it on the court and keep her moving, I’d have a good chance.”

Losing coach Jenny Gomez clearly impressed with Salisbury. “Well, whenever you see a team send five or six girls to the state individuals, you know it’ll be a tough day,” she said. “I thought we’d be fighting them until the end of the night. But their girls are all very consistent and very fit. Their footwork on the court was exceptional. They ran everything down.”

Now the Hornets will run for a title.

“This was major,” Griffith said after accepting the Western Regional championship plaque.  “We were underdogs today. No one expected us to win.”

NOTES: Salisbury will carry a 19-match winning steak into Saturday’s state final against Barlett Yancey, 5-0 winners over previously unbeaten First Flight. Barlett Yancey is now 22-2. Start time is 12:30 p.m. at the Burlington Tennis Center. The Hornets have won 10 state championships, including six straight from 2008-13. … Lake Norman Charter (14-2) was undefeated for three seasons before this one. The Knights lost their top player when Elon-commit Olivia Archer moved to Florida to play academy tennis earlier this year.