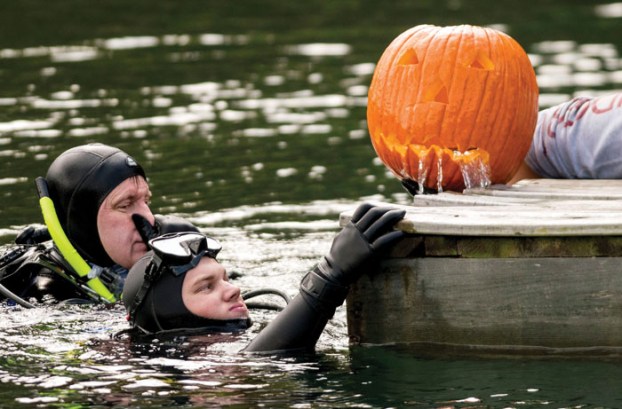 SALISBURY — If you thought carving a pumpkin at your kitchen table was tricky, imagine doing it 30 feet underwater in a murky quarry using a diver’s knife.

That was Justin Scarborough’s afternoon Saturday when he joined 23 other divers at the American Quarry to carve pumpkins underwater.

“It’s the same thing (as on land). The only difference is a pumpkin wants to move more; it wants to float. So you’ve got to put a weight in it to hold it down,” Scarborough said.

Scarborough said divers didn’t have to carve the pumpkins while treading water — a task that he said would have been near impossible.

“We’ve got platforms underwater, so you’re sitting on a platform. You just weight yourself down, go under, get to one of the platforms, let all of the air out so that you sink. And you literally lay flat on the platform,” Scarborough said.

Scarborough, who began diving in May, said he’s “not very artsy.” He tried to carve a dive flag design and then an octopus design. Both pumpkins broke in the water.

“But I just like diving. It was something we were doing. It was fun,” Scarborough said.

He and many of the 23 divers who were with him at the quarry are members of the Piedmont Diving and Rescue Association. The group owns three quarries in the area — one in Mooresville, one in Blanch and one in Salisbury.

Greg Culp, who owns the Salisbury Scuba shop just down the road from the quarry, organized the pumpkin carving, which he said is quite a popular Halloween celebration for divers.

Culp said divers often socialize with one another but there haven’t been too many gatherings so far that bring together the diving community. He’s hoping to change that, beginning with the underwater pumpkin-carving event.

“This is coming up on what I call the end of the recreational dive center. The water’s just about to get too cold to dive unless you do it in dry suits, so we figured this would be a fun way to finish up the season with all of the people that dive with us,” Culp said.

Culp said diving is a sport that naturally brings people together.

Don Herrman, who has been diving since 2009 and who works as a dive master for Culp, said the rules of the quarry encourage divers to become friends with each other.

“It’s one of the rules of this quarry that you can dive 24/7, because everybody has a key, but you have to have a buddy,” Herrmann said.

Herrmann said diving is a sport than almost anyone can get into.

“You need to be in somewhat good shape to scuba dive, but scuba diving doesn’t really get you in shape. Because once you’re in the water, it hardly takes much motion, and it’s very relaxing,” Herrman said. Doug Shellhorn, who has been diving for about 40 years, came with his children and wife to try underwater pumpkin carving Saturday.

Shellhorn said that until recently, he had always gone to the coast to dive. But since his kids have started diving in the past couple of years, diving at the quarry has become a family activity.

“We love it. It’s so much fun,” Shellhorn said.

Shellhorn said his pumpkin, which had X’s for eyes, “didn’t turn out so good.”

He ended up being given a prize at the end of the day — an award for the ugliest pumpkin.

Other distinctions included best pumpkin, most spirited pumpkin and pumpkin that took the least amount of effort.

All winners were given merchandise donated by merchants from Culp’s scuba shop.

On the stand, Army Sgt. Bowe Bergdahl apologizes to those wounded looking for him