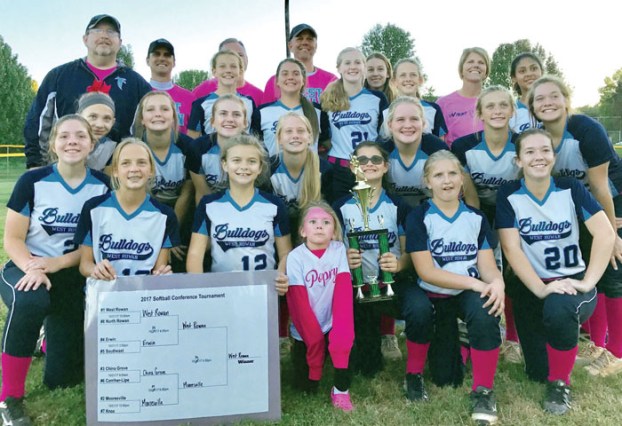 The West Rowan Middle School softball team capped an undefeated season on Thursday by beating No. 2 seed Mooresville, 5-4, in the tournament championship game.

A strong battle for the finals took place in Landis, with the Bulldogs coming through with late-game heroics to add the tournament title to their regular-season championship.

Madelyn VonCanon was in the circle at the start and pitched well, but West Middle and Mooresville battled back and forth.

The Bulldogs led going into the fifth inning, 4-3, when Karsen Simpson, phemonenally consistent all year, came on in relief to close the game out.

The Red Imps were able to squeeze a run in the top of the sixth to tie the game.

In the bottom of the sixth, with runners at second and third, Madeline Kluttz was robbed of a game-winning hit, as the Mooresville shortstop made a fantastic play to send the game to the seventh.

In the top of the seventh, with one out, Ashley Ennis made a fantastic catch in center field to ignite the crowd and keep the bases clear. Simpson got the third out.

Brooke Kennerly got on base, leading off the bottom of the seventh with a line shot off of the third baseman. VonCanon got a line-drive hit to move Kennerly to second. Krysten Cline’s blooper fell safely to load the bases before Abby Freeze’s infield hit gave the Bulldogs the walk-off win.

Both teams played excellent defense. The Bulldogs didn’t commit an error. Defense was the staple of West Rowan all year.

Kenadi Sproul was an anchor at shortstop and on the basepaths. She broke the school record for stolen bases.

Allie Burns, Cline and Emma Clarke led the offense for the Bulldogs. All three played excellent defense and made clutch plays at the plate and on the field.

The Bulldogs finished the season a perfect 17-0. They also were regular season and tournament champions in 2016.  Their combined record for the last two years is 30-1.

“The hard work this team put forth showed up to their benefit as they rose to the occasion and accomplished all their goals,” head coach Jimmy Greene said.

TAMPA, Fla. (AP) — Cam Newton is fine with where the Carolina Panthers are halfway through the season. “At the... read more