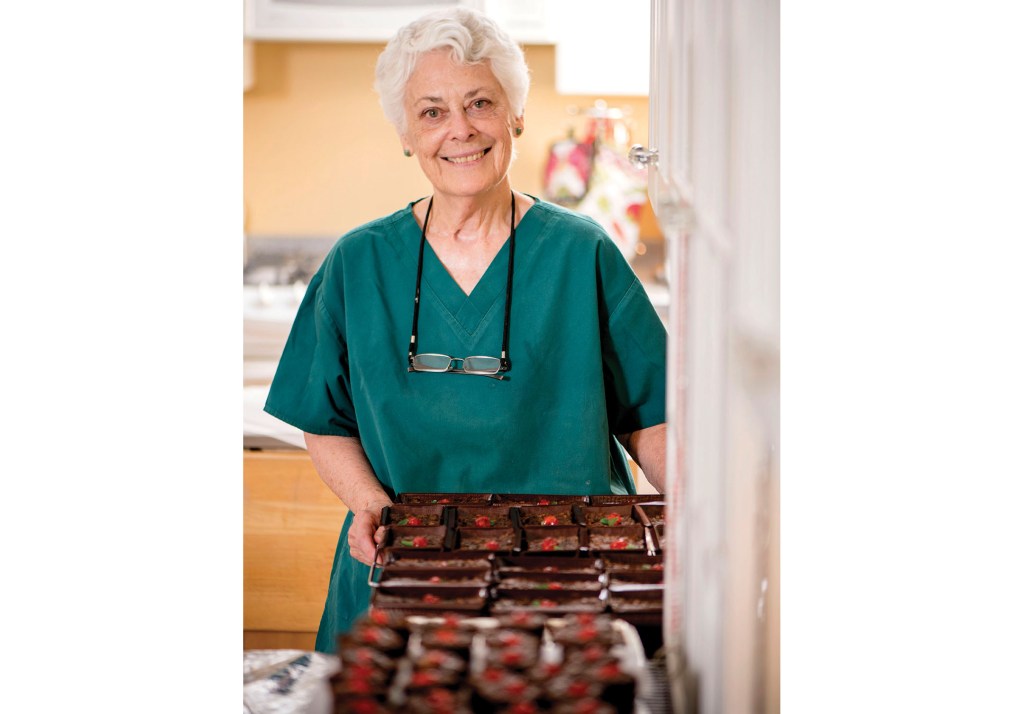 Creating McGillin’s Fruitcake takes care and time. Using a recipe handed down for generations, Eunice Rebrey has been busy this fall making what is really Irish wedding cake.

Once upon a time, she made it for family and friends, business associates, on request.

Now she wants to share it with the world, so she’s making batch after batch of the heirloom recipe.

The front room of her home is stacked with buckets of fruit  — raisins, dates, pineapples, candied citrus, cherries — and some of those buckets are having a nice rest with a cup of good Brandy.

They have to soak up the brandy to soften and add flavor to the almost-all fruit fruitcake.

The batter she makes is just enough dark, rich cake to hold the fruit together. And there are no nuts.

Now, hang on as we work on the family tree. In Irish tradition, children are named after relatives, so the same name passes down from generation to generation.

Eunice McLaughlin came to America in 1876. She married Frank McGillin, and they had nine children. The first and last were girls, Kathryn and Rose. Seven boys died between the ages of birth and 2 and a half, possibly of diphtheria.

That inspired the quote on the back of the business card: “A Voice Still Heard”

“The boys pass down the name,

the girls pass down the traditions.”

“It used to be, when you got married, the top layer of the cake was this kind of fruitcake, and that was the part you would keep to eat on your first anniversary or whenever. “

In some traditions, there’s a groom’s cake that’s like a fruitcake, too.

“It’s a process,” she says, working diligently in a large white plastic tub. Her kitchen is certified by the state, so she’s wearing gloves and a hair net, and visitors are netted up, too.

“I’m certified for nut rolls, too,” she says laughing. Her husband, dentist Jerry Rebrey, is nuts about nut rolls.

In a stand mixture off to the side are the butter and sugar she creams together to start the batter. Now she’s adding flour to the fruit — most of the flour in the recipe — to keep it separate and keep it from sinking to the bottom of the pan.

Once the fruit is throughly mixed, expertly floured and ready to go, she finishes off the batter and pours it into her white plastic tub. “It’s so much easier to mix this way,” she says, digging in and turning, folding and stirring everything together with her hands.

On most of counters in the kitchen are prepared pans, so she can bake several sizes at once. For some pans, she weighs the mixture, for some, she uses a certain size scoop.

“Then after I bake it, and I just use my regular oven, I put it on cooling racks, then let it cool overnight.

Once the cakes are completely cool, she does a little decorating with red and green cherries, very simple, for the top.

Her small loafs are half a pound, the medium one pound, and she’s does a 3-pound and a 5-pound version. The 3-pounder is baked in a fluted pan that will produce 20 precise slices. The five-pounder she mostly bakes on order.

She came up with a Wee Bit O’ Fruitcake, about two healthy bites, that she wraps in confectioners foil of all colors and packages in sixes or 12s. You can also buy them individually.

“It’s the perfect bite to have with a wee bit of tea” or coffee, she explains. She used to give boxes to her mother-in-law, who liked to have something to give to people when they visited her.

“And it’s a nice hostess gift or holiday gift, good for the office or teachers.”

When she’s at events, she makes an even more wee version and sells them for $1 to get people interested or let them try before they buy.

She will gladly tell you how to feed your fruitcake, too. Feeding mean adding some sort of alcohol, like brandy. She puts brandy on the fruit, but doesn’t soak the cake. “That’s up to the individual,” she says. But she will explain the process and tell you how to wrap it so it’s easy to feed and keep.

She advises buying a least a month ahead if you’re going to feed it and serve it for the holidays.

Her secret recipe uses five spices and the fruit. The spices are what you’d expect, cinnamon, cloves, ginger, etc. Each batch also uses 10 eggs, along with molasses and sugar.

Eunice tried to use Irish butter in the cakes, but she found that because it has more fat than American butter, it made the cake too crispy. It should be moist and chewy, with a long life.

“You have to give it time for the fruit and the spices to marry each other.”

Keep it in a cool, dark place — not a damp basement — and if it’s less than three months old, never put it in the refrigerator. … Just keep it wrapped airtight, with parchment paper on the cake and foil on top of the parchment. “I like the parchment better than the wax paper.”

“Slice it with a serrated knife to get through all the fruit,” she advises.

Other members of her family have tried to make it. Her sister-in-law made it once and said “Never again.”

“It’s time consuming. It takes me a day to prepare the pans. … The fruit should go no less than 24 hours in the brandy.”

She starts baking days by measuring three sets of everything so she can keep working without stopping.

When she started taking the cakes to some area craft shows, she found plenty of encouragement.

“So many people say they hate fruitcake, but when they taste this, they like it. It’s different.”

Eunice will be at First Baptist Church’s Holiday Faire this weekend and at the Saturday Salisbury-Rowan Farmer’s Market on the corner for Fisher and Jackson streets downtown leading up to Christmas.