Original Freedom Writer: One teacher can make a difference 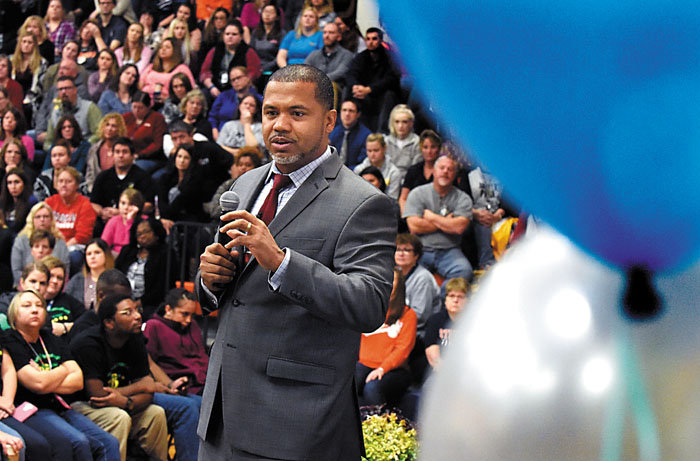 Manny Scott speaking to the teachers from Rowan-Salisbury Schools at Carson HIgh. photo by Wayne Hinshaw, for the Salisbury Post

CHINA GROVE — A teacher, a coach or a cafeteria worker has the power to change the trajectory of someone’s life, even on bad days.

That was the message Manny Scott left with Rowan-Salisbury Schools employees on Monday.

On what was a day off for students, Scott, 40, spoke to more than 3,000 school system employees Monday morning at Carson High School as part of professional development program for teachers and a back-to-school conference for noncertified staff. Scott told the crowd stories from his life growing up in and around Long Beach, California, and urged them not to give up — because they could be a student’s last chance.

“You don’t realize just how powerful you are. So I hope to help you see that today,” he said.

Scott is one of the original 150 “Freedom Writers” — a group of at-risk students who attended high school in a neighborhood plagued by poverty and gang violence that pushed on to achieve and tell their stories thanks to the dedication of teachers, including English teacher Erin Gruwell.

Their story was made into a 2007 movie starring Hilary Swank.

But Scott’s story started long before he encountered Gruwell. During a roughly 90-minute presentation, Scott wove stories of his life growing up “in the hood” in California, punctuating the speech with encouragements, questions and charges to teachers and staff members.

Scott came from a broken family. His father was in prison, and his stepfather was a crack addict. Before the age of 16, Scott had moved 26 times and slept in cars, on couches, in homeless shelters and on beaches.

His family often begged or dumpster-dived for food. Once, he saw his stepfather slam his mother’s face into a window; when he rushed to help, Scott was thrown from the second-floor balcony.

“I was the kid who took all those issues with me to school,” he said.

He found no relief there.

Surly, angry and self-conscious, Scott steadily fell behind in school. At one point, his English language skills were determined to be so lacking that he was classified as an English as a Second Language student and put in a class for Spanish speakers — even though English is his first and only language.

“From kindergarten all the way through my senior year of high school, I had a painful, traumatic experience in the classroom,” Scott said Monday.

His teachers often made things worse. In sixth grade, a teacher asked him to stand up in front of the class and commented on his ragged, dirty clothes. Then, he said, she took him out into the hallway.

“Your clothes stink,” she told him. “Kids are complaining that you’re stinking up our classroom. And if you don’t get your act together, young man, you’re going to end up just like your daddy. Isn’t he in prison or something?”

Scott paused, then asked RSS employees to think about the impact their words and actions could have on students who look to them for guidance and support.

“Do you enrich or impoverish the students under your care?” he asked, after a brief silence.

Poverty, he said, isn’t just a lack of money. It can also be a lack of access to people who care or who are able to help you.

By age 11, Scott regularly smoked marijuana and drank alcohol. He had stolen a car, broken into a house and gotten a tattoo. He skipped as much as half the school year and ended his freshman year of high school with a 0.6 GPA.

Scott said he felt trapped by his environment, rife with poverty and violence. When his best friend was brutally murdered on the way to visit him, Scott gave up and dropped out.

He spent the days roaming the streets, getting into trouble. One day, he sat on a park bench in Long Beach, close to giving up. A crack addict sat down next to him and told Scott that he saw himself in Scott. And then he told Scott to go back to school.

The man left, and Scott got off the bench and walked back to his high school. He begged the assistant principal to let him back in. Eventually, she relented but warned there would be a lot of work for him to catch up.

Over the next several years, Scott worked hard and fell into the hands of teachers who didn’t give up — coaches who became father figures, a math teacher who wouldn’t relent in tutoring sessions until Scott understood the concept, a science teacher full of passion.

But it wasn’t easy.

The school had 3,500 students who were sharply divided along racial lines. Gang wars broke out on campus.

“All those tensions spilled over into our classroom,” he said.

It was then that Scott and other students met Gruwell — or “Ms. G.” — a brand new teacher who came from a privileged background.

Despite being from a vastly different upbringing, Gruwell tried to understand her students. She showed up each day and tried something new — until she hit inspiration. In unconventional lessons, Gruwell used cultural icons including Tupac and Snoop Dogg to teach poetry and literary devices like iambic pentameter.

And then, she brought in a stack of journals.

“Everyone in this room has a voice, and I’m going to help you find it,” she told her students.

There were lessons everyone could learn from Gruwell, Scott said.

“Can I encourage someone who’s on the edge of giving up to keep showing up and trying something else?” he asked. “… Humble yourself and be a student of your students.”

Thanks to hard work and support from Gruwell and other teachers, Scott ended high school with a 3.9 GPA and made the honor roll. Gruwell pushed him to apply for college, and Scott found himself a student at the University of California at Berkeley.

After he graduated with his bachelor’s degree, Gruwell called him and asked if he was considering graduate school. When he got his master’s, she called to ask if he’d thought about a doctorate.

“Sometimes you have to believe in someone else’s belief in you until your own belief kicks in,” Scott said. “… I’m here today because of people who believed in me before I did.”

Scott now travels, speaking about his experiences, and is just shy of earning his Ph.D. All of the 150 students Gruwell taught earned a high school diploma, and many went on to have successful careers.

He closed his presentation with a plea: