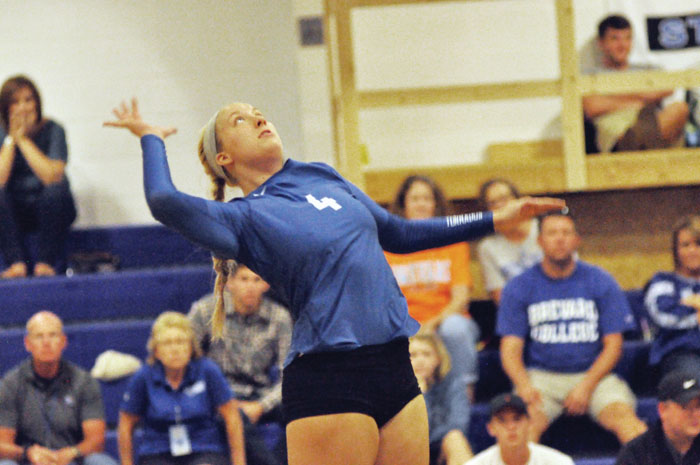 Not the way she’d visualized finishing when she first committed to the Brevard Tornados.

Brevard was a member of the South Atlantic Conference when the 6-foot outside hitter signed in the fall of 2013. She was a celebrated senior at Carson High then, a huge part of  Cougar teams that won 10 playoff games in two years. She and her teammates had grabbed back-to-back Western Regional plaques for head coach Kelan Rogers. Twice they’d played for the 3A state championship on the biggest stage.

Playing in the Division II SAC would mean competing against players and coaches Elmore already knew, schools such as Catawba, Lenoir-Rhyne and Wingate. Elmore couldn’t wait for that challenge. And for three autumns, she had the opportunity to battle, usually uphill, against those programs.

But Brevard has been scaling back athletically for a while now, transitioning its athletic programs from Division II, which gives athletic scholarships, to Division III, which doesn’t.

Brevard, like Pfeiffer, is now officially reclassified and is in the midst of its first semester of Division III competition.

“When I first heard we were going down to Division III, it really was a bummer,” Elmore said. “This was my last year of volleyball, and I really wanted to compete against all those SAC schools one last time. My friends and teachers, they’d come watch me play at Catawba, but that wasn’t possible this year.”

Brevard is a provisional member of the D-III USA South Athletic Conference, which should be great for Brevard’s future. But it presents disadvantages for Brevard’s present. Brevard isn’t yet eligible to compete for the conference championship or to play in the conference tournament. That explains why Elmore’s season ended Saturday.

Athletes who play for provisional conference members also aren’t eligible for league-based awards such as player of the week or all-conference, which is unfortunate. Elmore probably would’ve received accolades this season.

USA South includes familiar schools such as Meredith, Averett and Greensboro College. It would’ve been fun for Elmore to play against those North Carolina schools, but Brevard is so far west geographically that the 20-match schedule has been mostly against schools in Georgia, Tennessee and Kentucky. The road trips have been to unfamiliar gyms. The schools on Brevard’s schedule — Agnes Scott, Huntingdon, Berea, Piedmont, LaGrange, Covenant, and so on — are colleges Elmore had never heard of growing up.

“This definitely was a new day for all of us,” Elmore said. “We made the most of it. The seniors on the team can look back one day knowing we got things started in Division III with a pretty good year and a winning season. And this will be good for Brevard. In the long run, Division III is going to be the right fit. The schools we’re playing now are a lot more like Brevard than the schools in the SAC were.”

Elmore was a key player for Brevard right away in the fall of 2014. She had 13 kills in her college debut. She blasted 19 kills in a match against Catawba and finished her first college season with 207 kills, third on the team.

She experienced rough patches as a sophomore and didn’t play as often. She produced 112 kills, sixth on the team.

She bounced back as a junior with an even 200 kills and reached double-digit kills five times.

This season was her strongest. That makes sense. She was a very good Division II player. This season the people trying to block her or trying to turn her kill attempts into digs, were Division III athletes. The opposition was a little shorter, a little less skilled. She racked up 239 kills.

“It was kind of a sad season, but at the same time this was my best season,” Elmore said. “I know I did OK.”

The last time she got to play in Brevard’s Boshamer Gym was on Oct. 10. She went out with a roar at home— 22 kills, plus nine digs — in a 3-2 win against Piedmont.

But Elmore’s shining moment was yet to come.

The match against Maryville started two hours later, and Elmore turned in the match of her career. She smashed 28 kills to lead a 3-1 victory. She amassed those 28 kills, almost half her team’s total, while making only four hitting errors. She tied the school record (since Brevard became an NCAA school in 2009) for kills in a match. She broke the record for kills in a four-set match.

“I knew I’d had a good game, but I had no idea I had so many kills,” Elmore said. “My father (Gary) was there and when he came up and hugged me and told me I had 28 kills I was like, ‘What? 28!’ It was a day I’ll remember. My teammates made it possible. Good sets. Good passes.”

Three days later, playing against Agnes Scott in Decatur, Ga., Elmore registered 19 more kills. She’s won a lot of matches. That would be her last victory. Brevard finished 13-7, the first winning record for the program since 2007. So there was some satisfaction in her last days in volleyball, especially after she was named team MVP.

School has gone well for Elmore. Despite the travel and practice demands of a college sport, she’ll graduate on time this spring. She’s a math major with a business minor.

She’d make a pretty good coach, but she doesn’t see herself following the teaching path. She plans to enter the business world and hopes to land a quality internship this summer.

“My overall experience at Brevard has just been incredibly good,” Elmore said. “I’ve grown a lot here, and I’m prepared for what’s next.”