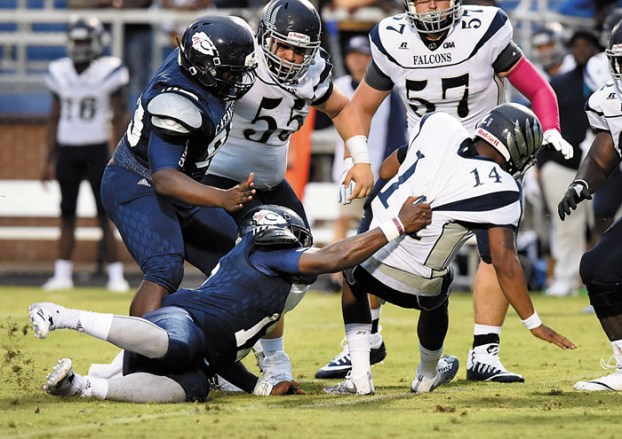 Wayne Hinshaw/for the Salisbury Post ... Catawba’s Isiah Huffin (on ground) gets a one-arm sack of St. Augustine quarterback D.J. Johnson (14), during the season opener on Aug. 31. Evans (5-11, 195) is a serious playmaker. He handles inside linebacker with the grace and speed of a basketball star. His pick-six that sealed Saturday’s 45-28 win at Limestone was only the latest on a long list of game-changing moments.

Peppers (6-0, 225) doesn’t make as make as many sacks or headlines as the other two, but he’s a tenacious grinder in the box, always fighting to get to the football. With 261 career tackles, he’s actually knocked down even more opponents than Evans and Kitchens.

Catawba had a fearsome foursome of linebackers in 2016, but it lost a quality outside backer in Jamal Lackey. Recruiting Lackey’s replacement was at the top of Walker’s priority list. He found his man in Isiah Huffin, a 6-foot-2, 235-pound junior college transfer from Louisburg. Huffin probably is as special athletically as anyone on Catawba’s roster.

“I don’t think we could have brought in a freshman to try to replace Lackey,” Walker said. “A freshman just wasn’t going to be able to play at the level of our other three linebackers. But Huffin has been able to play close to that high standard they’ve set. He’s a talented guy, and he’s stepped right in. It’s going to be incredibly hard to replace Kitchens, Evans and Peppers, and we’re going to have to replace all three of those seniors at the same time. But in Huffin, we’ve found a leader for our linebackers next year.”

Growing up in Winston-Salem, Huffin wasn’t an instant success.

“When I was 12, playing Pop Warner football, I was short and very overweight and playing offensive line,” Huffin said. “But I did want to get better. I also knew that to do better I needed to get in better shape.”

A middle school gymnastics program was an odd place for an offensive lineman to turn things around, but that’s where Huffin’s life transformed. Gymnastics training and a welcome growth spurt made him leaner and stronger. Increased confidence followed those physical strides. His goal when he started gymnastics was to be able to execute a backflip. He got a lot more.

“I got to be one of the two best gymnasts in our school,” Huffin said.

By the time he reached high school at North Forsyth, Huffin was on the verge of a breakout. The plan was for him to pay dues on the jayvees as a freshman in 2011, but one bruising hit in practice convinced coaches he was ready for varsity. In an early game against Reagan he got a sack. He was on his way.

“For most of  the guys at our school, Carver was the biggest rival,” Huffin said. “For me, it was always Reagan.”

Huffin has large, powerful hands and the spring to match his strength, so he proved to be a fine power forward for the North Forsyth basketball team.

“I could rebound well and I won a few dunk contests,” Huffin said with a laugh. “But at my height, I knew I could do more in football.”

North Forsyth was a 3A school in a 4A city, so the football non-conference games were struggles against the likes of West Forsyth, East Forsyth, Mount Tabor and Reagan. Playing defensive end, Huffin excelled. As a senior in 2014, he made 17 tackles against Mount Tabor.

Huffin could run and was bench-pressing 315 pounds and dead-lifting 485 in high school. Catawba wasn’t in the recruiting picture for him.  Western Carolina, Gardner-Webb, Charleston Southern and The Citadel were after him. Even Clemson showed interest.

Huffin drew raves from his coaches for his work ethic and his attitude and the sky was the limit, but his test scores came up short for him to fulfill his Division I dreams. His alternative was Louisburg, North Carolina’s junior college option.

“I couldn’t quite pull my test score up far enough, I had to go to Louisburg, and at first it was tough,” Huffin said. “I was like, ‘Dang, is this all there is to college football?’ But Louisburg turned out to be a great place. We lost only one game in my two years there, I made a lot of sacks (eight) and met new friends. Looking back, I’m glad I went there.”

Catawba successfully recruited Huffin’s Louisburg teammate, Sam Mobley, and Mobley’s runaway success as a receiver for the Indians in the fall of 2016 played a role in Huffin’s decision to join him in Salisbury.

“When Coach Walker came to Louisburg to recruit me, I knew right away that’s where I wanted to play,” Huffin said.

Huffin made an impression before the season started. Catawba was running a hoop drill in preseason camp, with players chasing each other in a tight circle to enhance agility.

“One guy starts, the next guy follows, and Huffin not only chases down the guy in front of him, he does a cartwheel — and  then a backflip off of  the cartwheel,” Walker said with a laugh. “We didn’t know he could do that. He’s an amazing athlete.”

Huffin said he’s been embraced by the veteran linebackers. They haven’t treated him as the new guy, they’ve welcomed him with open arms. They’ve taught him the ropes as far as college life.

Huffin has been credited with 29 tackles (4.5 tackles for loss), two sacks, five QB hurries, a forced fumble and a fumble recovery and has helped Catawba post a 7-2 recored. He made a big play on Saturday. He applied the pressure on the quarterback that created that pick-six for Evans. Huffin’s reward was a hug from Evans. A relieved Walker wanted to hug him as well.

“I had a good idea what the snap count would be,” Huffin explained. “I hadn’t quite gotten to the quarterback all day, even though I had some hurries, and it was just time for me to do something.”

Catawba didn’t do much that was positive in the first half. Walker barked at the troops at halftime, peeled some paint off the walls.

“He was very angry because he was so disappointed in us,” Huffin said. “We knew we’d let him down. We want him to be proud, and we played like it in the second half.”

Catawba, ranked sixth in the region, plays Newberry at home on Saturday at 1:30 p.m. Huffin will do something unusual whether Catawba wins or loses.

If Catawba wins, he’ll do a backflip.

If Catawba loses, he’ll be working out, pushing himself as hard as possible, shortly after the game. That’s a ritual he’s followed since high school.

“When you lose, you weren’t good enough,” Huffin said. “It means you need to get better.”