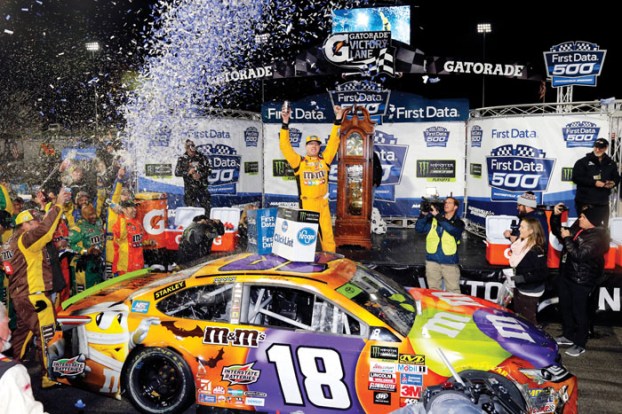 Kyle Busch to race for title after Martinsville victory

MARTINSVILLE, Va. (AP) — There should be no confusion about the intensity of NASCAR’s playoffs after Sunday’s show at Martinsville Speedway.

Chase Elliott could have won, same for Brad Keselowski, and Denny Hamlin, too.

It was Kyle Busch, though, who punched his ticket into NASCAR’s championship race with a victory in overtime of a race that turned wild very, very quickly and ended with a multicar accident after Busch took the checkered flag.

Busch moved Joe Gibbs Racing teammate Hamlin out of his way to earn a spot in next month’s championship race at Homestead-Miami Speedway for the third consecutive year. He won the series title in 2015.

“We weren’t the best all day, but we put ourselves in the right spots there at the end,” Busch said. “There was kind of chaos ensuing and none of it was our fault, we just came out on the right end of the stick.”

Keselowski was in position to win when Joey Logano developed a tire problem with about 10 laps remaining in regulation. Had his Team Penske teammate pitted under green to fix the tire, Keselowski likely would have coasted to the win and earned the spot in the finale.

Instead, Logano spun and brought out a caution.

Keselowski was moved out of the way by Elliott after a restart, and Hamlin then spun Elliott out of the lead with two laps remaining in regulation. Elliott wrecked, chased Hamlin down on the cool-down lap to show his displeasure, and the drivers had a heated exchange after they climbed from their cars.

It was a tough result for Elliott — from potential race winner to 27th, lowest of the eight remaining playoff drivers.

“My mom always said if you don’t have anything nice to say, don’t say anything at all,” Elliott said. “He’s not worth my time. I got punted from behind and wrecked in Turn 3 leading the race. I don’t know what his problem was. It was unnecessary and I hadn’t raced him dirty all day long.

“We had the best car I’ve ever had here at Martinsville, and had an opportunity to go straight to Homestead and because of him we don’t.”

Elliott could repeatedly be seen saying ‘You wrecked me,’ to Hamlin as the crowd roared its approval over the tension. Hamlin at first defended his actions because of the stakes, but later apologized to Elliott on social media.

“I’ve raced nearly 10,000 races since I was 7. Today was the first time I ever spun out the leader,” Hamlin wrote on Twitter. “I regret the outcome because it was not intentional the way it turned out but I am responsible for my own car and take blame. Nothing I say now can turn back the clock.”

Hamlin faded to seventh after Busch bumped him for the win.

“That was our chance to move to Homestead,” Busch shrugged.

Keselowski wound up fourth in a race his team believed he had to win.

Instead, he was simply darting his way around a huge pileup on the final lap that ended an emotional opening race of the third round of the playoffs.

Martin Truex Jr. wound up second in a 1-2 sweep for Toyota, which has won six of the seven playoff races. Truex and Busch have won three playoff races each, while Keselowski won in the second round.

The favorite to win the title, Truex said he is confident enough he will make it to next month’s finale at Homestead-Miami Speedway without having to bump Busch out of his way to grab the automatic berth.

“I don’t know that I would have done anything differently,” Truex said. “I think we can get to Homestead without making too many enemies. We’ll let everybody else fight and we’ll try to do our own thing.”

Clint Bowyer, not eligible for the playoffs, finished third.

Kevin Harvick was fifth in a Ford, Ryan Blaney eighth for the Wood Brothers of nearby Stuart, Virginia, and the manufacturer placed six drivers in the top 10.

Dale Earnhardt Jr. was the highest-finishing Chevrolet driver in 11th and was dumbfounded by the last-lap chaos.

“Man, I can’t believe how everybody crossed the finish line.  I ain’t seen nothing like that, I ain’t seen it, I don’t know if I ever have seen it,” Earnhardt said. “There was a wreck one time at Richmond before they ever reconfigured it in the Xfinity race on the front straightaway in like 1982 — that is the only thing I ever seen like it. Crazy finish.”