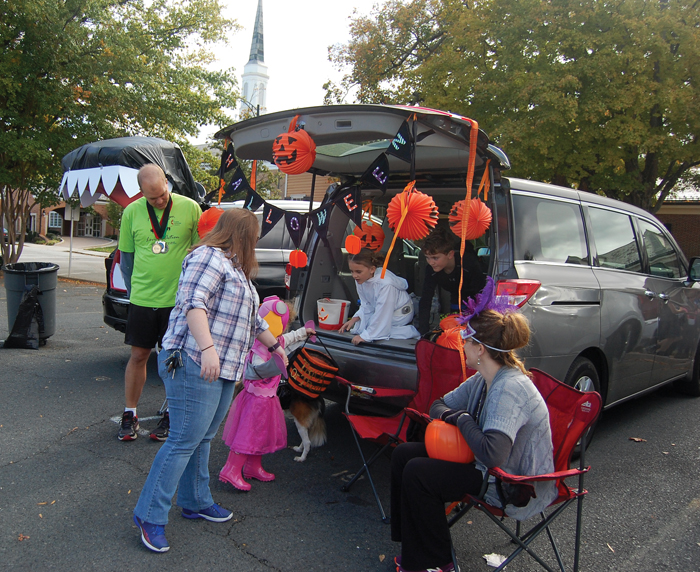 Mia, 7, and Tyler, 10, Conforti hand out candy from their the parents' trunk. (Jessica Coates/Salisbury Post)

SALISBURY — For the first time, First United Methodist, First Presbyterian and St. John’s Lutheran have partnered together to host a Trunk-or-Treat event.

“But we’ve had this idea for a few years, but it’s just kind of the first time that it’s come to fruition,” Fowler said.

He said that he began meeting with Jenni Fogt, director of youth ministries for First United Methodist, and Kai Thurow, youth and family minister for St. John’s Lutheran, several months ago to start planning the event.

“We have a lot of downtown churches and it’s good for the whole community to come together in a positive kind of way,” Fowler said. “There’s a lot of stuff that’s going on now in and around Rowan County that’s been kind of negative, so it’s good to sort of have some kind of positive, especially in the downtown area. Something safe and positive for the kids.”

Fowler said that the three churches pooled money to rent a bounce house for the afternoon.

“And that’s really the only expense,” Fowler said.

About 30 cars, brought by church and community volunteers, served as the main attraction. They parked and opened up their candy-filled trunks to the families who had come to trick-or-treat.

Fogt said that each church tried to recruit at least 10 cars so that all three would be somewhat equally represented.

Fogt said that, from the moment Fowler called her to ask about participating in the event, she was thought it was “great.”

“Alan called me and said, ‘Hey, we’ve always done this Trunk-or-Treat thing just for the First Presbyterian kids. What would you think about doing something for the Salisbury community?’ And I said, ‘I’d love to see churches partnering together and I’d love to do something for the community, so let’s go for it,’ ” Fogt said.

Thurow said that collaborating on projects is something that he thinks all of the churches have talked about at some point.

“I think, in our own little bubbles we’ve talked about, ‘Well, we want to do something, we want to start doing more with the other area churches.’ And we just really haven’t gotten around to doing a whole lot of things. And so we thought this would be a great first and pretty easy step to get different congregations involved. And we’re hoping next year that a few more congregations in the community jump on board, too,” Thurow said.

Thurow said that he hoped the success of the Trunk-or-Treat event might lead downtown churches to partner on other things in the future.

“We’re really trying to reinforce this idea that we are the church together and not just individual buildings doing their own thing,” Thurow said.

He said that members of his church were also excited by the idea.

“We’ve had a whole lot of positive response. A lot of people even said, ‘Oh, I can’t be here today, but I really like that you’re doing stuff with First Presbyterian and First United Methodist Church, ’” Thurow said.

The Robertson Family Foundation donated the use of the Bell Tower parking lot.