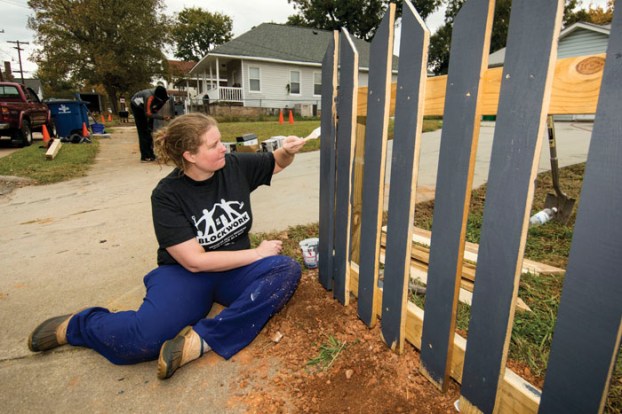 JON C. LAKEY / SALISBURY POST Kelly Misiak, director of servant leadership at Pfeiffer University, paints one of the new fences built on North Lee Street. The annual City of Salisbury Blockworks drew volunteers to help beautify two blocks on the northeast side of Salisbury on Saturday. Home along the 700 and 800 block of North Lee Street improved their curb appeal with new plants, paint, washing, fencing and minor home repair.

SALISBURY — Karl Sale has volunteered at every Blockwork since it began in his neighborhood — Brooklyn South Square — seven years ago.

He said that he walks away with a good feeling every year.

“And I feel like any time we can help reinvest in the community, it’s always a good feeling,” Sale said. “And I appreciate what folks did to help out in our neighborhood, so I’m paying it forward.”

This year, Blockwork — an annual event that brings together residents and community volunteers to do minor repair and cleanup work in a Salisbury neighborhood block — focused on the 700-800 block of North Lee Street.

“Ever since the inaugural Blockwork, I gathered members of my neighborhood and we actually got in the car and drive every street in our neighborhood. … And we made a list of blocks in need and there were a few. But we homed in on this one,” McHugh said.

McHugh is a former chair of the city’s Community Appearance Commission (CAC), which created Blockwork in 2010.

McHugh said that the 700-800 block of Lee Street was “the ideal Blockwork project” based on the criteria that the CAC laid out.

“Blockwork has always looked at a neighborhood where you can get some neighborhood involvement, so we’re not just coming into the neighborhood and people who actually live here are ignoring you. But it also is a nice mix of homeowner occupied and rental,” McHugh said.

C.J. Peters, owner of Top Hat and five-time Blockwork volunteer, said that helping rental companies with the upkeep of their properties is particularly rewarding.

“(Rental companies) start out with nice properties. And it’s not that they’re completely neglectful, it’s that you stop seeing the problems when nobody’s talking about them. And Blockwork allows those rental managers to look at it with a different eye, a different sight,” Peters said. “We come in and we say, ‘This would be nice with a fence. It would be nice to have some trees up here.’ And it’s nice for the rental company; they don’t mind. They’d rather it look better.”

Alyssa Nelson, a City of Salisbury urban design planner and organizer of this year’s event, said that the project is able to run on such a small budget because of volunteers and donations from community partners.

She said that the city public service department and code enforcement department helped by preparing sidewalks and delivering mulch.

The owners of an apartment building on the block paid to remove a dead tree in front of the building. Safrit Landscaping Construction then removed the stump that was left behind, pro bono.

The apartment building, located at 825 N. Lee St., has represented “the biggest challenge to the stability of the neighborhood,” according to the Blockwork application submitted by the neighborhood.

Two local artists also painted a mural of poppy flowers on a cement wall in front of the building.

The artists — Carlton Jackson and Bailey Wingler — had never painted together before Saturday.

Jackson is a Duke Energy engineer by trade, but has been painting for more than 30 years. Wingler is a professional artist who works out of her home studio in Salisbury.

Jackson, who is a member of the CAC, attended two previous Blockwork events. But he said that this year’s was the first one at which he got to paint.

“This is the first time we’ve done something like this (at Blockwork),” Jackson said.

Wingler, who had never attended a Blockwork event before this year, said that, for Salisbury, the addition of a mural to the city landscape is “exciting.”

“I think that, especially for this to be a historical community here, you don’t see a lot of more contemporary murals. So I think this is a great step for Salisbury and hopefully other businesses will be interested, once they see what’s happened here, in doing something similar,” Wingler said.