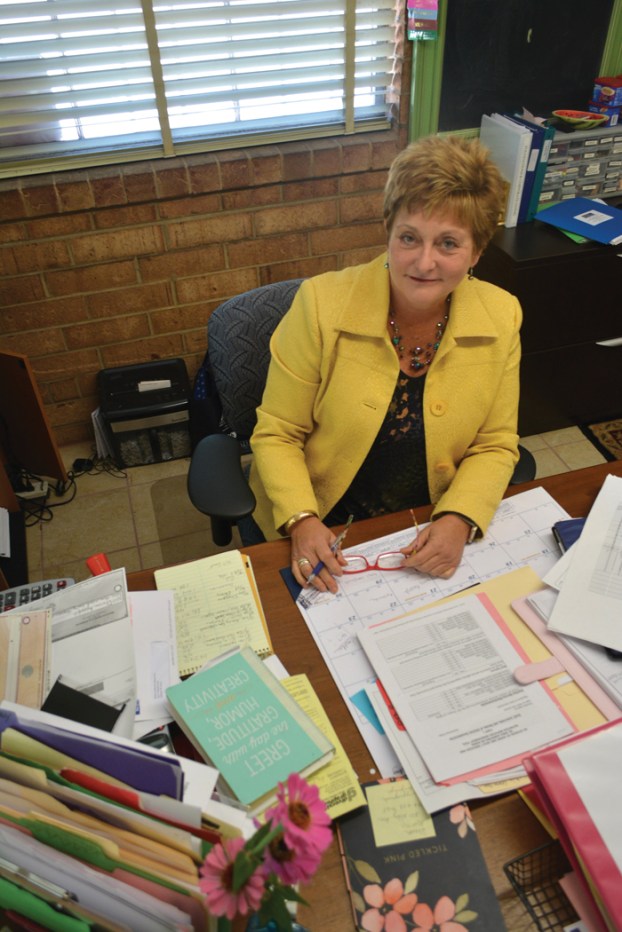 Somebody who looks out for them: Cindy Fink is new executive director for Meals on Wheels

When Cindy Fink moved back to Salisbury last fall, she intended to get a job within about two hours of Rowan County. Her father, Ken, still lives here, and she moved in with him while she was searching.

“The more I looked, the more I felt like I wanted to be in Salisbury more than anywhere else,” says Cindy, a graduate of Salisbury High School.

Cindy’s mother, the late Margy Fink, spent her career as director of child nutrition for Salisbury City Schools. Cindy has spent much of her career working with senior living communities, but was most recently director of the Kappa Kappa Gamma sorority house at the University of North Carolina at Chapel Hill.

“It just kinda came together that my interest in working with seniors came full circle,” says Cindy, who was hired March 1 as executive director of Meals on Wheels. Cindy is a 1980 graduate of UNC and earned an MBA from the University of North Carolina at Greensboro.

The advanced degree does help in her current position, she says. “It gives you a good background and education about financial statements and other paperwork. It’s good to have a well-rounded experience. In our marketing, we want to make sure our organization is visible. Everybody needs somebody who looks out for them.”

Cindy is in the process of updating the organization’s database to reflect its participants and volunteers. Meals on Wheels serves 200 meals a day, but during the course of 2016 served 427 different people. Some 1,000 volunteers help deliver meals.

Most participants are over 60. You must either be a homebound senior or someone who is homebound on disability to quality for Meals on Wheels.

“We’ve got a lot of big teams with our churches and local businesses,” Cindy says. “So each individual may volunteer once every six weeks. It makes it easier if you have a big team. We certainly have a place for volunteers. And please come and bring a friend.”

Cindy is compiling photographs of every house on every route. It’s easier, she says, if you know what you’re looking for when delivering meals. She’s learned a lot about the organization since the beginning of the year. She was named interim director in January before the permanent move in March.

“It’s not only about the meal,” she says. “It’s also about nutrition and making sure participants get the right food. We want a healthy balance. We’re looking at one-third of the RDA serving for each meal. We’re getting away from carbs and more toward fresh fruits and vegetables. That’s a really good thing.”

But Meals on Wheels is more than just good nutrition, Cindy notes. “It’s not just about dropping off a meal. It’s bringing a friendly greeting that breaks the social isolation of many of our participants. Otherwise, they would not see another human being that day. We just want to lay eyes on you and make sure you’re OK. Sometimes our volunteers find that something just didn’t seem right. We’re looking for any changes in conditions of our participants. There are a lot of people trying to take advantage of seniors. Sometimes, it’s their own families, unfortunately.”

Volunteers make sure participants get something special during the holidays. Who knows, Santa himself may make some Meals on Wheels deliveries this December.

“We want to include participants in our holiday celebrations,” Cindy says, adding that Mark Stout sponsors delivery of the Salisbury Post to each participant Monday-Friday. “It’s a wonderful service. It helps them be a part of the community and see what’s going on.”

Cindy is thrilled with the amount of cultural offerings she’s found since returning home. She’s joined the choir at St. John’s Lutheran — her home church — and recently participated in the community choir for Piedmont Players Theatre’s “In God’s Own Country.”

She loves the fact that she can purchase season tickets for the Salisbury Symphony for the same price as one symphony ticket in the Triangle. She’s also taken in shows at Lee Street Theatre.

She’s reconnected with St. John’s friends she remembers from confirmation classes and Luther League. That includes Carol McNeely, a longtime Meals on Wheels volunteer who now works with Cindy on special projects.

“I love Cindy to the moon and back,” Carol says. “She’s energetic and inspirational to work with.”

“She is a godsend,” she says of Carol. “She can do anything, and she walks in the door with the biggest smile.”

“Cindy is a breath of fresh air,” Sandy says. “She has added energy, vision, and lots of creativity and new ideas for Meals on Wheels. She’s really taken it to the next level. She is a great leader and easy to work with. She’s very talented and I love being a colleague.”

Cindy’s resume includes executive director stints with Granville County United Way and the Granville Educational Foundation. She also worked in the pharmacy industry before the economic downturn, and took the interim position at the sorority house in 2011, where she worked for the next five years.

Cindy is the mom to two adult sons, Jake Knott, who married Laura on July 1, and Matt Knott, who will marry Britni on Nov. 3.

As for taking after her mother in cooking, she admits, “I do OK.”

At a recent choir party, Cindy took her mother’s famous chocolate “funeral cake,” which she wants to rename Friendship Cake. The name doesn’t matter. Her fellow choir members raved, and said it tasted just like Margy’s. It made her feel good.

Along with cooking, water skiing and snow skiing, she loves to garden. She just redid the shrubs at her dad’s house. The two get along swimmingly.

“We have plenty of room,” Cindy says. “Plus he really likes my dog, and Pickles likes him.”

Two days to celebrate before Halloween

October is a month full of special days. Not only do we celebrate Halloween, but there are also two new... read more