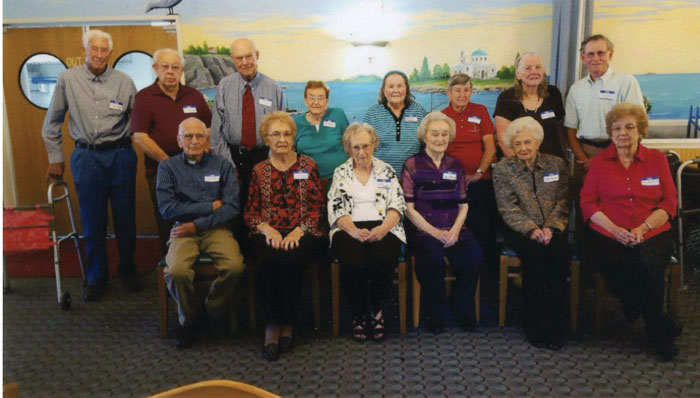 Rockwell High School Class of 1950 held its 67th class reunion Sept. 22 at Blue Bay Seafood Restaurant, with 12 class members and 12 guests present. President Norman File welcomed everyone and remembered the two class members, Irving Casper and “Pete” Connor, who passed away since the last reunion. After orders from the menu were filled, people ate lunch and reminisced with former classmates about events that occurred in days long gone by. Following lunch, information was shared about former classmates that could not be present for the reunion. Also, Norman, reading from a 1932 booklet “Remember When: A Nostalgic Look Back In Time,” astonished everyone that they had lived through a period of time in which prices of food, cars, gasoline, housing, university tuition, etc., were so low. The booklet also included national and world news, movies, music, sports events and famous births that occurred during that time.

East Rowan High School’s Class of 1967 held its 50th reunion Sept. 16 at The Abbey of Salisbury.

After the social hour, Chairman John Linker welcomed everyone. Pastor Bill Ketchie remembered the 28 classmates who have passed away. “The Missing Chair” was adorned with streamers containing their pictures and names. He then blessed the meal, which was catered by Sue Choat.

Johnny Sides was recognized for the donation he made to the treasury. Linker thanked other classmates who donated extra money and door prizes to make this reunion special. Nelda Freeze created a quilt in school colors: red, white, and blue. Raffle tickets were sold on her quilt, and $800 was raised for scholarship. The class added $200 and presented the total to East Rowan.

Eric Sifford read a letter he had written to Governor Cooper informing him that the class of 1967 was the first at East to be integrated, and the first black student was Calvin Strawder. Eric explained how much he had learned from Calvin and what an honor it was to have known him. He presented Calvin with a framed letter from the governor.

Veterans of this class were honored with their pictures on another special chair designed by Rita Chastain. They were given a standing ovation while deejay Chad Sain played “Proud to Be an American.”

Entertainment was provided by Rita Chastain pantomiming “She’s Got You.” Tony Drew sang several numbers, including “Poison Ivy” with Wanda Nixon that they had performed in 5th grade.

The Salisbury-Rowan Heart Fund Ball committee members recently held a meeting to begin planning the 50th anniversary of the Heart Ball to be held at the Country Club of Salisbury on Feb. 10, 2018.

This year’s event raised more than $23,000. Donations were made to the Community Care Clinic, Novant Health Medical Center, and Rowan-Salisbury Schools, all for heart related needs.

The members of the 2018 Heart Ball Committee are:

Past President: Missie and Greg Alcorn

KANNAPOLIS — On Nov. 4, the Masons at Cannon Memorial Lodge 626 will present “The Secrets of Masonry … Unfolded.” Beginning at 5 p.m., this event is open to the public, and will answer many questions about who we are, what we do, and illustrate our interactions with our community.