West Rowan pulls away for convincing win over Carson, 45-13 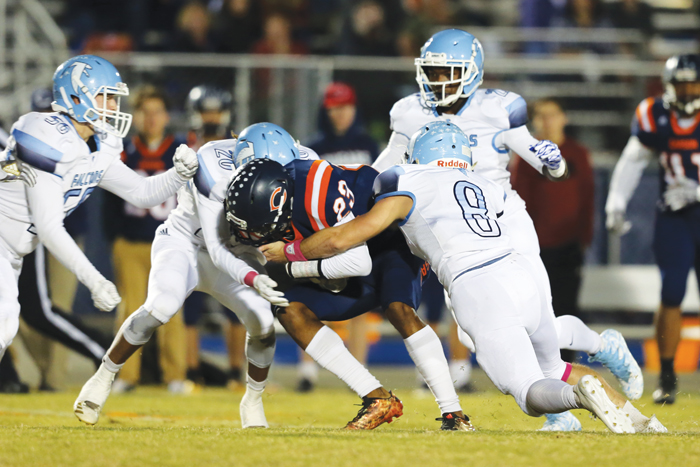 CHINA GROVE —This was strictly a business trip for West Rowan.

The Falcons rolled up their sleeves, punched the clock and went to work Friday night at Carson. Three hours later, they jogged off with a declarative, 45-13 North Piedmont Conference victory.

“Our mindset right now is to dominate every team that gets in our path,” defensive tackle Devin Turner said after West (6-4) won its second straight game and improved to 3-1 in conference play. “We have to keep winning. We have to keep dominating.”

The Falcons were particularly imperious on offense, scoring six touchdowns and a field goal on their first seven possessions. Quarterback Payne Stolsworth passed for 199 yards and three touchdowns. Wideout Jalen Houston made six receptions for 151 yards and scored two touchdowns. And the ground game stretched its legs, totaling 208 yards and three rushing touchdowns.

“We just came in with our heads right,” senior running back Martavio Rankin said. “We played hard and got it done. The offensive line made it easy for us. Without them, we couldn’t do the main part of our offense.”

Because of that line play, Stolsworth wasn’t sacked or even credited with a rushing attempt. Carson’s short-handed defense didn’t force a turnover.

“We know they’ve got back-ups for back-ups for back-ups,” linebacker Jacob Taylor said after the Cougars (3-7, 2-2) had their modest, two-game winning streak snapped. “But straight up, we were really lousy. We weren’t bringing it like we were before. They ran straight up the middle and would easily get 10 yards. That’s not acceptable.”

Each team scored on its first possession — West on a 15-yard TD pass to Ty’kese Warren less than a minute into the game and Carson on a 12-play, 65-yard drive capped by Jerry Cipres’ 14-yard sweep around the left side.

“Our first drive was great and so was our second,” said Carson coach Joe Pinyan. “But we got a false start penalty and then missed a block on a play and it got down to fourth-and-5.”

That’s when Cole Sifford’s pass for Jemarius Hairston was knocked away by West safety Malcolm Ingram, forcing a turnover on downs.

“That was a little bit demoralizing,” said Sifford, the undersized, scrambling quarterback who looked like he could have used an air bag. “When that second drive stalled, I think we wore down a little.”

Carson managed a 140 rushing yards and 116 through the air, but two interceptions proved costly. The first was picked off by West defensive back Reggie Everhart and returned to the Carson 22-yard line with 18 seconds remaining in the first half. Following a penalty and three incomplete passes, kicker Fredrico Cruz gave the Falcons a 24-7 halftime lead with a 34-yard field goal.

“We knew we were the better team, but we couldn’t come out slow like we have been,” Stolsworth said, after completing 10 of 14 attempts. “The couple games we did that, it hurt us. Tonight, the guys on the offensive line asserted themselves. The pass protection was good and the run-blocking was really good.”

So was the defense. Sifford’s next pass was picked off by West’s Joojo Brush deep in Falcon territory early in the third period. The guests then marched 99 yards and scored when Stolsworth and Houston hooked up on a 56-yard pass, catch and run that extended the lead to 31-7.

“We’ve come a long way over the last month,” said Sifford, who passed for 84 yards and ran for 56, including a 1-yard TD plunge in the fourth period. “But we can’t have mistakes like that interception. If I had put it a little farther out there, it’s probably a touchdown.”

In the end, they didn’t have a chance at all. West turned it into a layup drill with 3:47 to play when senior Jesse Baker scored his second touchdown of the fall on a 4-yard counter play.

“We all had jobs to do and we did them,” said offensive tackle Logan Younce. “We really buckled down, making holes for the running backs and protecting the quarterback. It takes a team to win a game.”

NOTES: West has pocketed victories against North Rowan, South Rowan, East Rowan and Carson — giving it the mythical county championship. The Falcons don’t play Salisbury but the Hornets lost to North Rowan. … Stolsworth has passed for 1,810 yards, thrown for 22 touchdowns and been intercepted just four times. His next completion will be his 100th. … Houston surpassed 1,000 yards receiving and has 14 TDs. … Both teams close their NPC seasons next Friday. Carson visits league-leader South Iredell and West hosts Statesville.