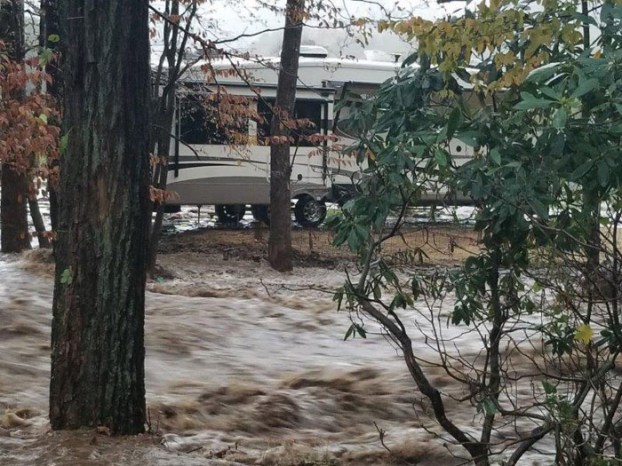 Water rushes through the RV camp in the N.C. mountains where Dan Patterson was caught in storms last weekend. Submitted photo

Dan and Jatana Patterson’s visit to the North Carolina mountains last weekend went from leisurely to scary after a torrential rain.

The downpour caused a nearby creek to overflow its banks and into the RV park where they were staying, with floodwater rushing within inches of the Pattersons’ RV.

“It was a horrible rain — I mean, in sheets — like we’ve never seen before,” said Dan Patterson.

The Pattersons had driven about two and a half hours from their home in Spencer to the Roan Mountain Valley. They parked at Li’L Rock Creek Campground along Little Rock Creek and Green Creek in Glen Ayre.

The storm came through about midday Monday, and they watched nervously as the nearby creek quickly grew. In an hour’s time, Patterson said, they saw the creek get 30 feet wider and 3 feet higher. The water was rushing with such force that it was noisy, he said.

Fire department personnel asked them to vacate their RV.

The Pattersons and their three dachshunds — Lucy, Leo and Mollie — went to a friend’s RV across the park and watched as rushing waters ran closer and closer to their own RV. The waters did go under other RVs nearby, but the Pattersons had parked on slightly higher ground.

The water stopped just short of flooding any of the RVs or nearby houses, but it washed out a few bridges. The Pattersons were able to drive their RV out later the same day, but several homes were cut off from the main roads by the bridge damage.

No one was hurt.

Patterson said Little Rock Creek breached a private berm along N.C. 261, just north of Green Creek Road, that was built several years ago to protect property, houses, churches and businesses, as well as the RV park.

“The N.C. DOT and Mitchell County government needs to step up and build a concrete wing wall to protect these travelers and property owners,” Patterson said.

You can see a video of the floodwaters here: https://www.youtube.com/channel/UCQirj8U5HTxk4kGqjktY3qQ and more photos at www.rowancounty.info/glenayre_flood.

SALISBURY — A two-day focus on dealing with violence and public safety wrapped up just after dawn Friday. An optional... read more