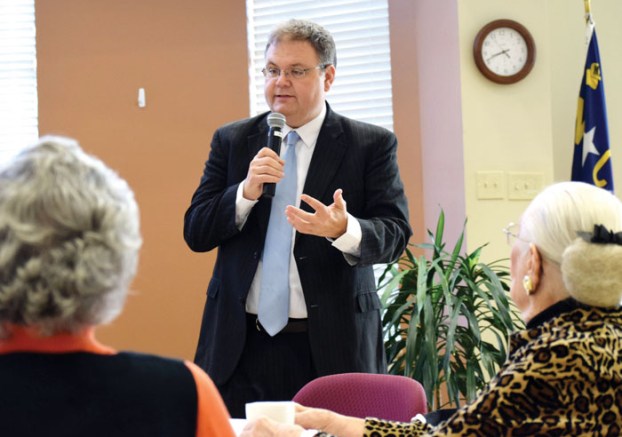 SALISBURY — A two-day focus on dealing with violence and public safety wrapped up just after dawn Friday. An optional prayer breakfast followed a Thursday workshop on how to broach difficult subjects and solve problems.

The programs were sponsored locally by Trinity Oaks and Mayor Karen Alexander. They featured West Virginia state Sen. John Unger III as the facilitator and keynote speaker. The workshop was provided by the National Issues Forum of the Kettering Foundation.

Bill Johnson, executive director of Trinity Oaks, said the early-morning breakfast was meant as “a way to kind of close out what we found to be a great event.”

Johnson said he thinks the discussions and brainstorming sessions on how to reduce violence in Salisbury were productive.

“I thought it was wonderful and, I think, empowering for the community,” he said.

Over the next few months, Johnson said, participants plan to work together to implement de-escalation training and strategies and to address mental health and similar crises. These strategies were chosen by a majority of those at Thursday’s workshop as best suited to combat violence in Salisbury.

Other participants spoke up during the breakfast to say that they found Thursday’s workshop — with its diverse audience and conversations — to be a step forward for Salisbury.

“There was a sense of community that I’ve never seen at another event — and we’ve had seven,” Alexander said, referring to previous forums on the subject.

“We all have situations,” she said of violence in Salisbury. “But simply because we have those situations does not mean we cannot do something about it. … Our job and our responsibility is to do what is right and to do it according to the will of the Lord.”

Unger spoke during the breakfast about his experience as a pastor, senator and missionary.

He said that during his short time in Salisbury, he found it to be a beautiful city.

Thursday’s discussion involved a diverse group of people, all working together as a community, that Unger said is something he has rarely seen in his time with the Kettering Foundation.

But he also heard about the negative reputation that some associate with Salisbury. That doesn’t have to hold the city back, he said.

“Sometimes we ought to embrace the negativity and say, ‘That’s transformation,’ instead of hiding a bad past.”

Unger gave the example of Christ, who kept his Crucifixion scars after the Resurrection. Scars, Unger said, can offer hope and encouragement to others.

When he looks at Salisbury, Unger said, he sees “a community being transformed.”

Unger also shared stories from his life and about how he came to work under Mother Teresa in Calcutta, India, in 1990 and 1991.

At the time, Unger was a young college student who worked in the mission field in Hong Kong over the summer. There, he made contact with the Sisters of Charity, which mentioned him in a letter to Mother Teresa.

Unger was invited to work with Teresa in Calcutta because the nun hoped to start an outreach in his native Appalachia.

It was in India that Unger learned one of his greatest life lessons — straight from Mother Teresa herself.

During relief aid after a flood, Unger said he became overwhelmed with the need of the people and the responsibility of planning and executing relief for a six-block area of Calcutta. One day, he went to the nun, defeated, and told her to give the responsibility to someone else because he wasn’t sure he was making a difference. Mother Teresa turned to him and said: “God doesn’t call us to do great things. God calls us to do small things with great love.”

After her death, Unger was invited to her canonization in Rome.

He used his life story to encourage the group that “as long as you’re still here, you have a purpose that God has for you to fulfill.”

“What we need to discover is our purpose,” he said. “And our purpose is not just for ourselves. It’s to build community.”

Unger is expected to return to Salisbury in January to hold another workshop focusing on the opioid epidemic.

Artist Bob Timberlake’s new book is a ‘Letter to Home’

By Susan Shinn Turner For the Salisbury Post RALEIGH — Bob Timberlake is not succinct. Which is why his conversation... read more