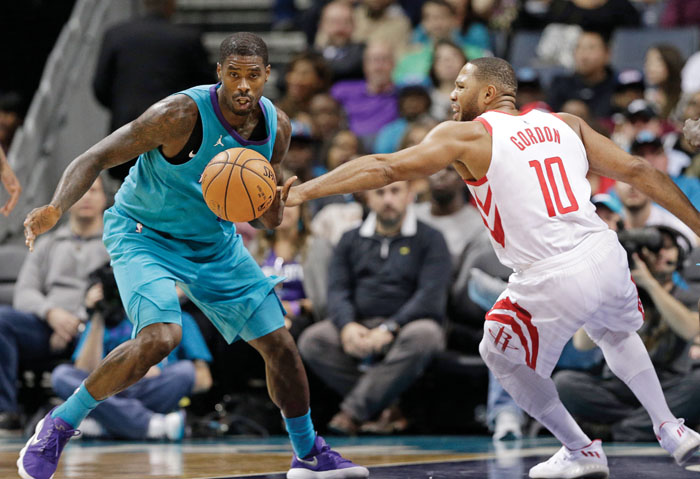 CHARLOTTE (AP) — James Harden had 27 points, 11 assists and 10 rebounds, and the Houston Rockets made 22 of 57 3-point attempts in a 109-93 victory over the Charlotte Hornets on Friday night.

The Rockets nearly broke their own NBA regular season records of 24 3-pointers made and 61 3-pointers attempted set last December.

Eric Gordon and Ryan Anderson led the 3-point barrage. Gordon was 6 of 16 from beyond the arc and had 26 points, while Anderson was 6 of 15 and finished with 21 points.

The Rockets took advantage of the Hornets’ cold shooting in the first half and took a 10-point lead at halftime. The Hornets started the second half on an 8-0 run but could never get the lead and the Rockets pulled away in the fourth quarter.

Kemba Walker led the Hornets with 26 points, and Dwight Howard had another strong game with 19 points and 16 rebounds against his former team. It’s the fifth straight game Howard has recorded at least 15 rebounds.

However, Howard’s poor free throw shooting — he was 5 of 15 — cost the Hornets points and momentum. The Rockets fouled Howard in the fourth quarter, willing to trade three points for one.

At one point in the second quarter Howard made both free throw attempts — banking the second one off the glass — and crowd erupted in a sarcastic cheer.

Rockets: Outscored the Hornets 29-16 in the second quarter and held the Hornets to 4 of 22 shooting from the field. … Chris Paul, Nene and Trevor Ariza did not play due to injuries.

Hornets: Shot 31.3 percent from the field in the first half. … Howard recorded his 670th career double-double. … Nic Batum, Cody Zeller, Michael Carter-Williams, Treveon Graham and Julyan Stone did not play due to injuries.

NEW YORK (AP) — Kristaps Porzingis had 30 points and nine rebounds, and the New York Knicks beat the Brooklyn Nets 107-86 on Friday night for their first victory of the season.

Rookie guard Frank Ntilikina also broke the ice with his first NBA points and finished with nine as the Knicks became the last team in the league to get a win this season.

They did it with a surprisingly strong defensive effort that shut down the NBA’s highest-scoring team, holding the Nets about 35 points below their average.

New York blew it open with a 25-6 run in the third quarter that turned a three-point lead into a 72-50 cushion and coasted from there.

Knicks coach Jeff Hornacek gave veteran Jarrett Jack his first start at point guard and he responded with eight points, seven rebounds and five assists. Ntilikina, who has been injured for much of the time since former president Phil Jackson made him the No. 8 overall draft pick, then picked up the backup minutes and played well.

Ntilikina, who missed the previous two games with a sprained left ankle after a scoreless NBA debut, made a long jumper with 49 seconds left in the third quarter. The French guard hit a 3-pointer early in the fourth.

Russell got the first basket of the third quarter to cut New York’s lead to three, but the Knicks controlled the next seven minutes of play. Porzingis had a follow dunk and three-point play as he and Enes Kanter combined for all the points in a 9-0 run. Soon after, a 12-2 spurt extended the lead to 72-50.

Nets: Brooklyn missed its chance to even the all-time series, which the Knicks lead 95-93.

Knicks: Willy Hernangomez, an All-Rookie selection last season who had played just 15 minutes in the first three games — sitting out one entirely — got in during the first half and finished with four points.