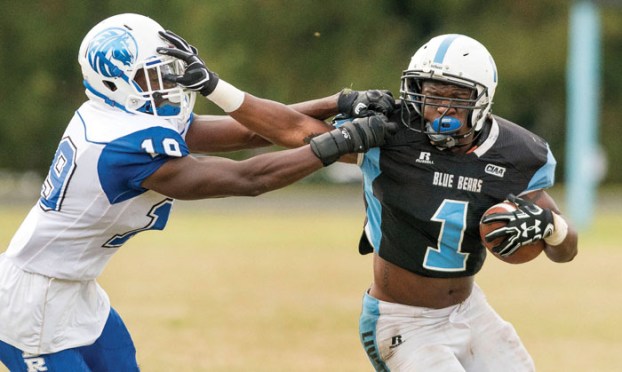 SALISBURY — Of all the things that have made this a less-than-fulfilling season for Livingstone’s football team, Saturday afternoon’s Homecoming loss might top the list.

With an announced crowd of 4,535 looking on, the winless Blue Bears surrendered a late-game touchdown and fell, 28-26, to visiting Fayetteville State.

“I hate losing,” junior receiver Everett Ransom said after Livingstone (0-9, 0-6 CIAA) suffered its 12th straight loss since last October. “And this is the one game the alumni come to, wanting to see a win. We tried to give it to them, but couldn’t. We tried to give the people some hope.”

Instead, the Blue Bears watched FSU (5-4, 4-2) score a decisive touchdown with 1:30 remaining and earn its fourth victory against Southern Division teams.

“This loss is harder than the St. Aug’s game (30-29),” coach Daryl Williams said after Livingstone ran 99 plays from scrimmage, piled up 447 yards total offense and collected 30 first downs. “Emotions were running high. We spotted them 21 points, came all the way back and scored 26 unanswered points. With a minute-forty, minute-thirty to go, we thought we had the game won.”

Yet the scoreboard doesn’t lie. The visiting Broncos hurdled back in front when quarterback Richard Latimer eluded a frantic Blue Bears’ rush and flipped a short sideline pass to running back Stevie Green. The sophomore — who surpassed 1,000 yards rushing this season on a first-quarter run — then dodged a tackle attempt by defensive lineman Armond Cox and rumbled down the left side for a 27-yard touchdown.

“The defensive line opened a hole for me and I just went to it,” said Jarod Richardson, the LC linebacker who harassed — and nearly sacked — Latimer in the FSU backfield. “I remember chasing him down and coming close, but he just made a play. He did what he was supposed to do. This is how a team wins and loses. The outcome is always one play away.”

“Give credit to Livingstone’s defense,” he said. “They did a great job of slowing my offense. We couldn’t get anything going and knew the running back out of the backfield would be our answer sooner or later. Eventually we made a play we had to make.”

It became necessary after FSU coughed up a three-touchdown, first-quarter lead. The Blue Bears lost two fumbles — the first when starting quarterback Xavier Longerbeam was mugged on the third play from scrimmage and the second when Salisbury High graduate Justin Ruffin had a ball stripped and returned 25 yards for a TD.

“Longerbeam’s been playing with a bad shoulder all year,” Williams said. “And the second one was a miscommunication between Thad (Bell) and the running back.”

Hayes wasn’t happy about what came next — a pair of Livingstone second-quarter touchdowns. “We got comfortable, that’s the key word,” he said. “But we’re a young team that’s still learning. And the game isn’t over just because its 21-0 in the first quarter.”

Livingstone responded when Marcus Baisy busted a 67-yard touchdown run and Ransom gathered an 18-yard TD pass from Bell in the second period. It got even closer early in the third when Ruffin (99 yards on 26 carries) scored his second touchdown of the season on a 16-yard sweep around the left side.

“The defensive end came in too hard and I caught him out of position,” Ruffin said. “I just used my speed and found my way to the end zone.”

Only 4:28 remained in the third quarter when Ransom caught his second TD pass of the game and gave Livingstone a 26-21 lead. It came when Bell lobbed a near-perfect 5-yard fade pass that Ransom grabbed in the far right corner of the end zone.

“I was told to bait (the defender), to make him go inside,” Ransom said after snaring four passes for 63 yards. “Thad threw the ball right over his head and into the bread basket.”

It all went for naught in the waning moments, after the Broncos regained the lead. Down by two points, Livingstone’s final charge up the hill was repelled when Longerbeam’s Hail Mary pass from the FSU 40-yard line was batted down in the end zone as time expired.

“It’s definitely heartbreaking,” senior left guard William Odomes said. “It’s my last Homecoming and we had this hunger to win. It seemed like everybody played their best, so I can live with that.”

Without doubt, it was Livingstone’s best performance in a barren season. “You can’t get better effort than this,” Ruffin said afterward. “We knew Fayetteville State was gonna come hard — and we came harder. We just fell a little short.”

NOTES: Senior running back Jarius Richardson suffered an ankle injury following a short gain with 12:54 remaining in the first half. He spent the rest of the day on crutches. … Livingstone rushed for 284 yards and passed for 163. … FSU’s Keshawn James led all tacklers with 13. Teammates Seth Johnson and Jaelin Beugre had 11 each. Walter Watkins made eight tackles for LC and Kevin Williams made his team-best third interception in the third quarter. … The Blue Bears have one last chance to win this season when Johnson C. Smith (1-8, 1-5) visits for the Commemorative Classic next Saturday afternoon. It’s also Senior Day as the two schools celebrate the 125th anniversary of the first black college football game. Livingstone first played Biddle College (now JCSU) in Salisbury in 1892.

West Rowan pulls away for convincing win over Carson, 45-13

By David Shaw sports@salisburypost.com CHINA GROVE —This was strictly a business trip for West Rowan. The Falcons rolled up their... read more