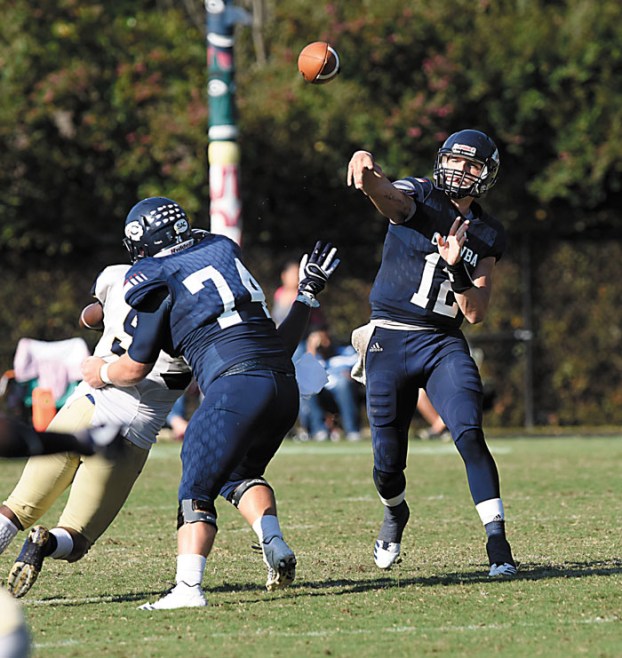 GAFFNEY, S.C. — Catawba’s football team managed to make head coach Curtis Walker as mad as he’s ever been on Saturday afternoon at Limestone, but all’s well that ends well.

Catawba got 26-for-36 accuracy, 403 passing yards and four touchdowns from QB Patrick O’Brien and three TDs from explosive back Kenyatta Greene, who is emerging as a major force in the South Atlantic Conference.

Catawba regrouped after Walker’s fiery halftime speech shook the walls and won, 45-28. Catawba has a clear path to the Division II playoffs, controls its own destiny with two weeks left in the regular season, but the Indians didn’t resemble a playoff team in the first half.

“Ball-security issues and coverage issues,” Walker said. “In the first half we turned it over three times and we got beat deep twice. We gave them opportunities and we wasted our own opportunities. We didn’t play anywhere close to our standard. I was as angry and frustrated at halftime as I’ve ever been with any team, and I let our guys know that. I’m glad they bonded and came out and played with more focus in the second half.”

The play that summed up Catawba’s first-half frustration was a sweet, 52-yard run by Eamon Smart that somehow ended badly — with a lost fumble a yard from the Limestone goal line.

Catawba’s only touchdown of the first half  came on a Patrick O’Brien pass to Sam Mobley. Mobley set up a deep strike with several short routes, before streaking well behind the Limestone defense for a 74-yard scoring play.

Lee Brackman’s 33-yard field goal in the middle of the second quarter put the Indians up 10-7. But they they fell behind at halftime, 17-10, when Limestone’s towering, 6-foot-7 quarterback D.J. Phillips, who transferred from Marshall, burned the Indians with a deep pass 27 seconds before the break. That breakdown sent Walker to halftime in an unhappy mood.

The good news is Catawba (7-2, 3-2 SAC) was a five-TD steamroller in the second half.  Greene got two TDs through the air and added another on the ground. O’Brien threw a third-quarter scoring pass of 33 yards to veteran Keyon West.

With Catawba clinging to a 31-28 lead with 7:10 remaining, O’Brien hit Greene for the 32-yard touchdown that provided breathing room and a 10-point lead.

Just 10 seconds after Greene’s third trip to the end zone, Phillips dropped back to throw, looking to answer, and Catawba linebacker Isiah Huffin poured through on a strong pass rush. Huffin drilled Phillips as he was throwing the football. Senior linebacker Trey Evans was in the right place at the right time for the interception and a backbreaking pick-six.

Next Saturday afternoon brings a home game with Newberry. The Wolves have struggled some, but they still have the talent that made them the preseason favorite in the SAC.

NOTES: Phillips broke Limestone’s passing yards record against Newberry last week in his first start of the season and broke it again against Catawba with 413 passing yards. He threw 51 times and completed 25. Vyncint Smith had seven catches for 180 yards. … Evans had 10 tackles for the Indians, while Allen had seven. … Omar Staley had two sacks for the Indians. Mobley racked up 132 receiving yards, while Jourdan Osinskie had six catches for 105. … Limestone is 4-5 and 3-3 in the SAC.

By David Shaw sports@salisburypost.com SALISBURY — Of all the things that have made this a less-than-fulfilling season for Livingstone’s football... read more