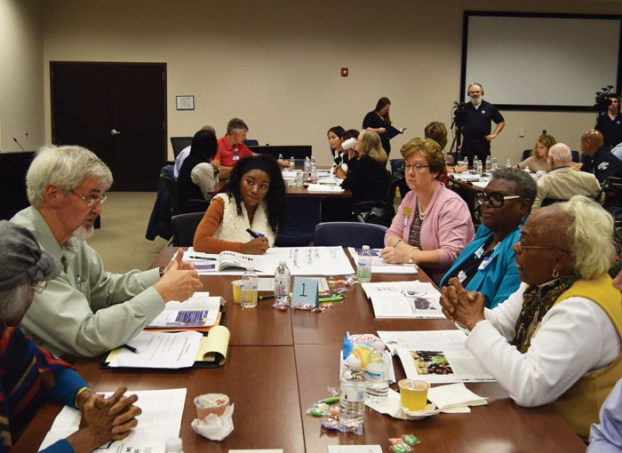 For nearly three hours Thursday community members thought critically about how to reduce violence and increase safety in Salisbury. The workshop was sponsored by Trinity Oaks, and facilitated by West Virginia Sen. Rev. John Unger, and sought to train attendees on how to have meaningful conversations about difficult topics. Rebecca Rider/Salisbury Post

Salisbury residents sit down to talk about tough issues

SALISBURY — People from all backgrounds and experience came together Thursday morning to discuss solutions to violence and safety concerns in Salisbury.

The “Community Engagement: ‘Let’s talk’” workshop sought to open discussions on difficult topics such as violence and racism in a safe environment and to train participants in how to approach contentious topics.

The workshop was sponsored by Trinity Oaks nursing home and facilitated by West Virginia Sen. John Robert Unger III of the National Issues Forums and the Kettering Center.

“We’re hoping that this will be a platform that will be used by various groups throughout our community,” said Bill Johnson, executive director of Trinity Oaks.

Unger was invited to Salisbury by Ted Goins, who said he first met the senator a week after the tragic murder of 7-year-old A’yanna Allen in December 2016. The death brought issues of violence to the forefront of local discussions.

Roughly 100 people attended the Thursday morning workshop. Leaders of the three-hour session asked groups to think critically about common strategies to reduce violence and increase a feeling of community safety, and to ask: Would this work in Salisbury?

In the past year, he said, the Salisbury Police Department has implemented a stratified policing model, formed partnerships with state and federal law enforcement agencies, increased foot patrols, and expanded its community engagement.

So far in 2017, Salisbury has had seven homicides — the same as this time last year. Aggravated assault is down 15 percent, total violent crime is down 11 percent and residential burglaries are down 44 percent.

The group laid out ground rules for discussion, focusing on listening and respect. Unger warned that there is always a trade-off: to accomplish anything, participants must be willing to give something up in return.

Deliberative dialogue, he said, “really gets to the heart of our ethics, our values.”

And when it comes to issues of community safety, everyone has a piece of the puzzle to create heaven on earth, he said.

“It means that there’s no throw-away people,” Unger said.

In order to reduce community violence, he said, a community must name the issue, frame the issue, make deliberative decisions, identify resources, organize actions and do collective learning.

Would these things work in Salisbury? Would they work anywhere? Or are they just pieces of a much larger puzzle?

The group then came up with solutions: perhaps police officers could attend more community events, schools could be improved or a mentorship program could be started.

“It is not a government-led initiative, it is a community group-led initiative. … Which is why I think it’s so powerful,” Mayor Karen Alexander said.

Unger said the model follows the example set by the first line of the Constitution: “We the people of the United States, in order to form a more perfect union, establish justice, insure domestic tranquility, provide for the common defense, promote the general welfare, and secure the blessings of liberty to ourselves and our posterity, do ordain and establish this Constitution for the United States of America.”

“Well, that’s what we’re doing here,” Unger said. “We the people, coming together to form a more perfect union.”

But he cautioned that even if Salisbury manages to solve crime and safety issues, the battle would not be over. Today, he said, the issue of contention is violence. Tomorrow, it could be opioids, poverty or education.

“There is a journey but there is not necessarily a destination,” he said.

But the community must be willing to take the first step, he said.

The Post is honoring a request to not report the views or personal experiences shared by participants in the group discussion.

SALISBURY — In a month, the Salisbury Police Department will enter the next phase of its partnership with a federal agency to... read more