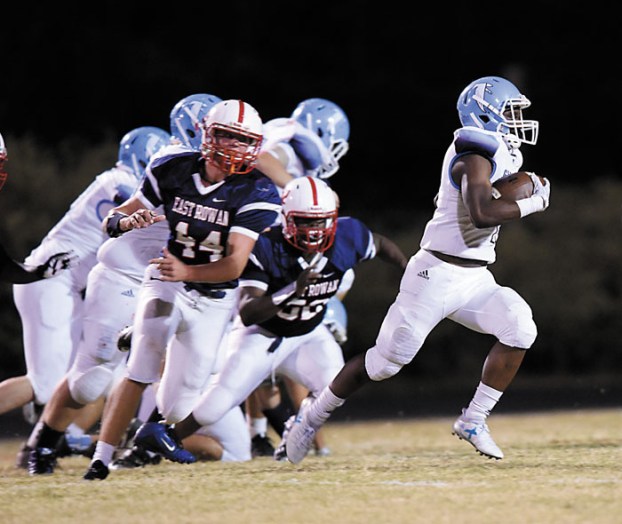 It’s late October, and Rowan County football teams remain in search of a signature victory against an opponent outside the county’s borders.

North Rowan is a solid 7-2, although the only team the Cavaliers beat that owns a winning record is Salisbury, and that was back on opening night. North Rowan was battered at North Stanly last week, turning the ball over often in its first major test in a long time and losing, 35-7.

The Cavaliers have a chance for redemption tonight on the road at West Montgomery. There’s a lot on the line. It’s a game for second place in the Yadkin Valley Conference and the second-place team in the league gets an automatic playoff berth and projects to get a first-round bye in the 1AA playoffs. North will be in the West bracket, while West Montgomery is expected to be in the 1AA East bracket. North Rowan will be in the playoffs as a wild card if it falters tonight — all wild cards will be determined by MaxPreps rankings — but it would be nice to win and move closer to that first-round bye.

Salisbury (6-2) is officially in the 2A playoffs. While the Hornets entertain hopes of upsetting powerful North Davidson on the road tonight, they are headed for third place in a nine-team league. Salisbury projects to fall into the smaller half of the 2A West bracket, and the Hornets project to be a No. 8 seed, assuming they can beat South Rowan in their final regular-season game. If they do grab that No. 8 seed, they’ll be home for the first round of the playoffs, which would be nice. The bad news is the 2A West bracket is expected to include powerhouses such as Reidsville and Mountain Heritage.

Who have the Hornets won against this year? Their best win actually was last week against East Davidson (6-4). That’s the only Salisbury victim that currently owns a winning mark.

West Rowan (5-4) controls its own fate. As a six-team league, the North Piedmont Conference gets two automatic playoff berths. West will finish second if it can win against Carson and Statesville to close the regular season. West projects to make the playoffs as a wild card, if it wins against Carson, but loses to Statesville.

West Rowan would fall into the smaller half of the 3A West bracket. That bracket probably will include Charlotte Catholic, Robinson, Crest and Weddington, among others. MaxPreps rankings will be used to determine who the wild card teams are.

West  Rowan has beaten one team this season that owns a winning record. That was North Rowan. West’s biggest win other than that was against Concord (4-5).

Carson is 2-1 in the NPC, so it’s still alive to finish in the league’s top two and get an automatic playoff berth. That would require a pretty major upset tonight against the Falcons, given the history of that series and Carson’s injury report, plus a shock-the-world upset next week against first-place South Iredell.

Given the low expectations early on, Carson (3-6) is two plays away from having a remarkable season. If the Cougars had been able to win cliffhangers against Central Cabarrus and Statesville, they’d be an amazing story right now.

South Rowan (2-7) has made strides but doesn’t project as a playoff team. East Rowan (2-7) had a decent start but it hasn’t gone well lately.

In the South Piedmont Conference, A.L. Brown (8-1)  and Robinson (7-2) are both 3-0 in the league heading into tonight’s game, and they’re going to finish 1-2 in a league with two guaranteed playoff berths. Tonight’s game will determine who is 1 and who is 2.

The Wonders will be in the 3AA West bracket, a bracket that’s expected to include Mount Tabor, South Iredell, A.C. Reynolds and the only team that beat the Wonders —  Marvin Ridge.

Davie (4-5)  won’t finish in the top two in the Central Piedmont Conference, but it has played a killer schedule, boasts a lofty MaxPreps ranking, and projects to make the small half of the 4A West bracket as a wild-card team. Davie projects to be in a difficult bracket with teams such as Harding, Hickory Ridge, Vance, Porter Ridge, South Caldwell and Mooresville. Davie has a tossup game against East Forsyth tonight. East Forsyth appears destined for the 4A East bracket.

The ADM  numbers used for determining school size (A or AA) will be released the last week of the regular season.

Brackets are divided into East and West based on geography.

The picks were 7-1 last week, with a miserable miss on North Rowan-North Stanly. The picks are 42-10 for the season.

West leads the series 11-1. Carson’s lone victory came in stunning fashion in 2013. West won 28-15 last season, and it was 28-2 with two minutes to go. West coach Joe Nixon hasn’t lost a county game in his three years as West’s head coach, and West has dropped only three in the last 15 years.

After edging Carson, the Hounds have a clear path to second place in the league, although they still have to play at Mount Ulla next week. Statesville leads the series 10-2 and outscored the Mustangs 59-39 in the most recent meeting in 2012. East’s most recent triumph in the series was in 2009. East’s defense has struggled, and Statesville QB Bryant Young could have another big night.

South Rowan is a big favorite for the first time in quite a while. Central Davidson has dropped 32 in a row since it beat South Rowan on Halloween night, 2014. Central also beat South in 2013 and leads the series, 2-0. South’s speed guys should have a big night.

Former Catawba receiver Brian Flynn has North Davidson playing outstanding football. The Black Knights have lost only to Mount Tabor, a strong 3A team. North Davidson back T.J. Boyce has been the CCC’s top offensive player with 1,611 rushing yards and 29 of his team’s 31 rushing TDs. Salisbury only won three games last year, so the Hornets are having a stout season under first-year coach Brian Hinson, another Catawba grad. These schools haven’t squared off since 1984. Salisbury’s most recent win was in 1982. The series is 4-4. North Davidson and Ledford haven’t played yet and are tied for first in the CCC.

North leads the series,6-5, even though West Montgomery beat the Cavaliers in the 2010, 2011 and 2012 playoffs. North’s most recent win was a thriller in the 2012 regular season. While North is ranked higher by MaxPreps, West Montgomery blasted South Stanly, a team North edged, and West Montgomery had a much closer loss to North Stanly. West Montgomery also has the home field in this battle for second place in the YVC.

The game of the night, with the winner very likely to run the table in the league. Robinson is 4-0 at home and hasn’t lost a game since Sept. 1 at 4A Hickory Ridge. The Wonders have won their last seven and they’ve won six times on the road. They’re finally back home.

Two good teams that are well down in the standings in a league that still boasts a pair of unbeatens in West Forsyth and Glenn. Both teams still project to make the playoffs as wild cards.

East Forsyth will have Senior Night emotion on its side and also has better overall offensive and defensive stats. The schools haven’t played since 1988. East Forsyth leads the series, 4-2.