Leonard Pitts: Men must do better and be better 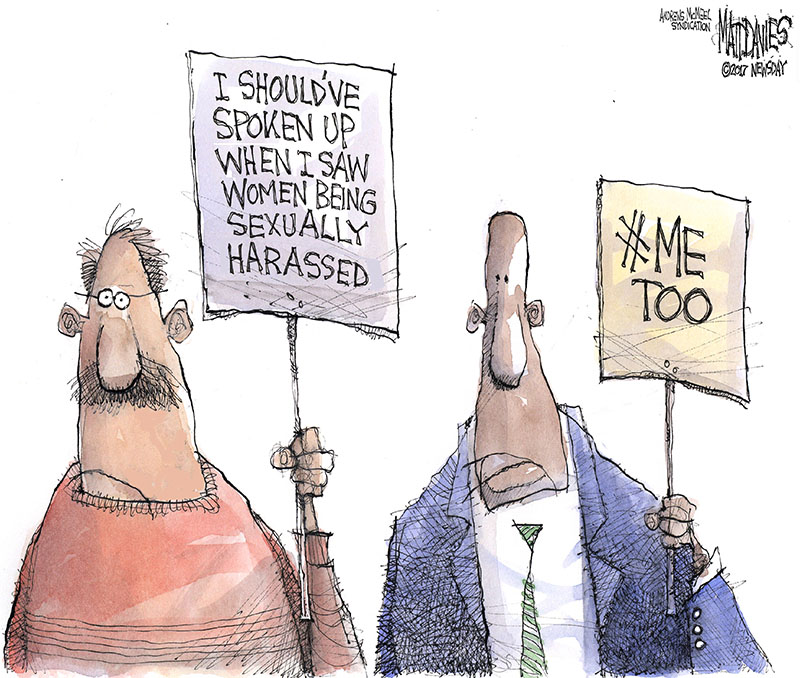 How many is this now?

I’ve lost track of the number of prominent men who’ve been accused of sexual harassment in the weeks since The New York Times outed movie producer Harvey Weinstein as an alleged serial offender. Lupita Nyong’o, Angelina Jolie and Ashley Judd are among the dozens of women he reportedly subjected to behavior that was, by turns, bullying, sleazy and intimidating.

Even as shockwaves from that news were still rolling outward, similar accusations began piling up against an assortment of other powerful men.

They include: celebrity chef John Besh, who stands accused by over two dozen women; actor Ben Affleck, caught on an old video groping actress Hilarie Burton; journalist Mark Halperin, alleged to have sexually harassed five women and grabbed one by her breasts; director James Toback, whose accusers number over 230.

They also include the 41st president of the United States, 93-year-old George H.W. Bush, accused of touching actress Heather Lind inappropriately — from his wheelchair — during a photo-op.

As if that were not bad enough, news broke last week of yet another payout — $32 million — by Bill O’Reilly to yet another woman who said the deposed cable news kingpin sexually harassed her. She also said they had what The New York Times called a “nonconsensual sexual relationship.” Which sounds like a tortured way of saying he raped her.

Clearly, we are having ourselves a moment here.

It reflects not a sudden increase in sexual harassment but rather, a sudden increase in the courage of women to defy their own hurt, confusion and humiliation so as to put names and faces to acts of thuggery, piggery and dominance. And their moment of bravery necessitates a moment of soul-searching, even from — especially from — men who like to think of themselves as decent and good. In that spirit, I need to share a story.

No, not that kind of story.

It’s just that, three years ago when we were stunned by similar charges against Bill Cosby, I remember being surprised to learn he’d actually been accused before, way back in 2005. Why hadn’t I known this, I wondered?

It turned out I had. I had even written about it, though in that column, I spent less time damning him than decrying the fact that this public moralizer had opened himself to charges of hypocrisy. And then, I apparently forgot all about it.

In my own defense, I write 94 columns a year and the 2005 accusation was not nearly as compelling or convincing as those that exploded in 2014. Still … I forgot about it. It did not become part of my mental file on Cosby.

That lapse embarrassed me then. It embarrasses me now.

The Los Angeles Times reports that rumors of Toback’s predations went back to the ‘80s. Weinstein’s pervy-ness was supposedly an open secret. O’Reilly’s alleged behavior was likewise well-known.

Why, then, did the men around them not speak out? Stand up? Decline to work with them?

On the contrary, one guy bragged of being a sexual predator last year and he was elected president.

So the message of this moment could not be more clear: Men must do better. Men must be better.

And this one will.