Girardi out in NY, leaving with ‘heavy heart’ 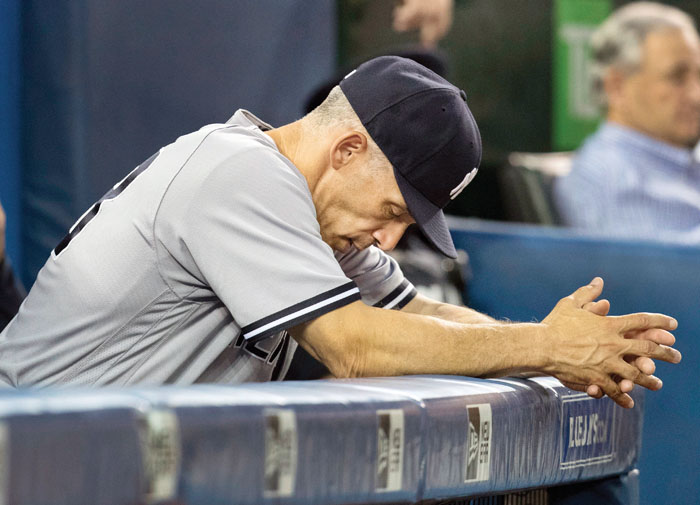 FILE - In this Aug. 8, 2017, file photo, New York Yankees manager Joe Girardi reacts during the sixth inning of their baseball game against the Toronto Blue Jays, in Toronto. The New York Yankees announced Thursday, Oct. 26, 2017, that Girardi will not return to the team in the 2018 season. The announcement was made by Yankees Senior Vice President and General Manager Brian Cashman. (Fred Thornhill/The Canadian Press via AP)

Joe Girardi was fired as New York Yankees manager Thursday after a decade that produced just one World Series title for a team that expects to win every year.

“With a heavy heart, I come to you because the Yankees have decided not to bring me back,” Girardi said in a statement released by his agent, Steven Mandell. “I’d like to thank the fans for their great support as a player, coach and manager and the lasting memories of their passion and excitement during the playoff games.”

An intense and driven former All-Star catcher, Girardi was at the end of his four-year contract and said last weekend he had to speak with his family before deciding whether he wanted to return. New York made the decision for him.

“Everything this organization does is done with careful and thorough consideration, and we’ve decided to pursue alternatives for the managerial position,” Cashman said in a statement.

Cashman said he and owner Hal Steinbrenner had spoken directly with Girardi this week.

“He has a tireless work ethic, and put his heart into every game he managed over the last decade,” Cashman said in his statement. “He should take great pride in our accomplishments during his tenure.”

New York said Cashman and other team officials will not discuss the decision during the World Series.

Girardi wore uniform No. 25 as a player with the Yankees from 1996-99, when he helped win three titles, but switched to No. 27 when he earned the manager’s job over Don Mattingly and succeeded Torre after the 2007 season — signifying the team’s quest for its 27th championship. Girardi took uniform No. 28 after leading the team to a World Series victory over Philadelphia in 2009.

New York changed managers 20 times from 1973, when George Steinbrenner bought the team, through October 1995, when Torre replaced Buck Showalter. But the Yankees have had just two managers in 22 years since.

New York became the third of the 10 postseason teams to remove managers, joining Boston and Washington. There is no clear favorite to replace him, and candidates from within the organization could include bench coach Rob Thomson, Triple-A Scranton manager Al Pedrique and Class A Tampa manager Jay Bell.

Possibilities from outside the organization include former Kansas City manager Trey Hillman, a one-time Yankees special assistant who managed in South Korea this year; Mets hitting coach Kevin Long, who held the same role with the Yankees from 2007-14; and former Philadelphia manager Pete Mackanin, who was a pro scout for the Yankees in 2008 and 2013.

The 53-year-old Girardi led a young squad on a surprising run to an AL wild-card berth this year with a 91-71 record, the team’s best since 2012. New York beat Minnesota in the wild-card game, then fell behind Cleveland 2-0 in the Division Series. Girardi admitted he made a mistake not asking for a video review of a hit-by-pitch call in Game 2 that led to an Indians rally.

“I screwed up. And it’s hard. It’s a hard day for me,” he said then. “But I got to move forward and we’ll be ready to go tomorrow.”

New York won the next three games to advance, lost the first two games of the ALCS at Houston, then won three in a row to move within a victory of reaching the World Series for the first time in eight years. But the Astros swept the final two games.

Girardi visited Astros manager A.J. Hinch in his office after the finale to give encouragement.

“He’s a real class act,” Hinch said. “It’s a shame to see so much turnover because of the work, the blood, sweat, tears poured into these job. And I don’t think anybody goes through more than what Joe does in New York.”

Girardi’s statement thanked people from Steinbrenner and Cashman down to the player development and scouting staff, traveling secretary and even the clubhouse attendants. He had sounded unusually nostalgic when discussing the atmosphere at Yankee Stadium during the playoffs.