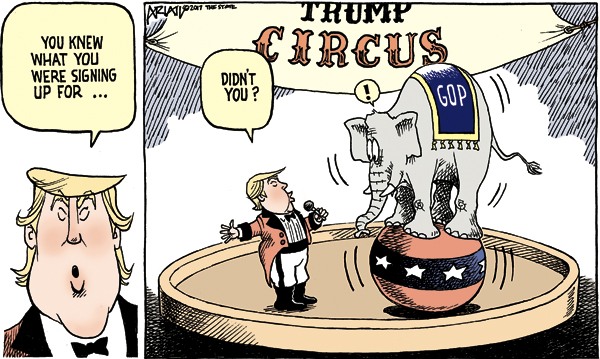 … Letter: Vote for Trump was vote for better policies, security

We all want economic strength, energy independence and national security. However, I’m afraid that this president has put all three, and more, in danger due to his incompetence, hubris and crippling narcissism.

I’ve seen nine presidents in my lifetime, and not one has been this attacked or demonized as much as Trump. What’s worse is the mistreatment of the voters who supported him, the denial of First Amendment rights and the collective suppression of opposite opinions on how the country should be run.

… Trump stepped away from all the power and wealth a person could want and the embrace of a loving, extended family in his elder years for something revolutionary — real love of his country and a desire to serve all the forgotten men and women who’ve been ignored for decades.

Well stated, Ms. Stuard-Will. President Trump was not my choice in the primary because he showed himself to be an undisciplined boor, unable to control his inarticulate tongue. We can survive that. We can survive Democratic control of the White House and both chambers of the legislature. We cannot survive a liberal, socialist, globalist Supreme Court. That is the only reason I held my nose and voted for President Trump. Keep up the fight.

It’s true: the demographics of Salisbury have changed. Rather than be recognized as “the majority minority,” I prefer the global majority. When the minorities come together we become by far the majority.

If you are frustrated and feel as though the city is not taking your concerns to heart and feel your voice is not being heard, exercise the right so many fought and died for us to have: exercise your right to vote. Vote like your life depends on it because it does.

I urge the citizens of Salisbury and other municipalities in Rowan County having elections this year to get out and vote. Do not let the 16 percent tell you how you will live. And that is what you will do if you do not cast a ballot. The Salisbury race is nonpartisan but there are seven Democrats running and any five will bring the city back to the people, not the privileged.

Cook’s overall assessment is right. This is an off-year election, which usually has unbelievably low turnout. This makes things easier for those who usually dominate at the polls because their demographics who show up will still show up. That means the status quo.

On the flip-side, those who want change have an opportunity to make that change happen, but their challenge is simple: get people who think and feel the same as you to show up.

Change should have come a long time ago as far as the Salisbury City Council. … Yes, Salisbury has a decades-old pattern of electing one African American, but I can remember when it was not any. Citizens should exercise their constitutional right to vote in all election. Many people died and went to jail for this right. What are you staying home for?

I love how Mrs. Cook went out of her way to paint two of the candidates in a negative light. Perhaps the voters would also be interested in what role the other candidates played or are playing in the Fibrant fiasco?

Who mandates the expectations of a council member? Why would one have to be a disruptor simply by asking questions? For the record, disruptor means “a person or thing that prevents something, especially a system, process or event, from continuing as usual or as expected.” Taking the side of a neighborhood? Questioning purported statistics that have no factual basis whatsoever?

Mr. Hardin said during the last campaign that he would question that which did not make sense and that he was for a thriving Salisbury from one end of the city to the other, that there was more to Salisbury than downtown. For the above you have the unmitigated audacity to demean him?

The slant against Todd Paris was scandalous …

To the citizens of Salisbury, I implore you to get out and vote between now and Election Day.

Just because a president and a retired general say something doesn’t make it true or right. I learned that some time ago. We are being lied to over and over again by this administration.

Search out the video of the pre-Army LaDavid Johnson riding a bike without the front wheel and you get an idea of the fun dad his kids will not have throughout their lives. How many lies are you going to keep accepting blindly because you don’t like the other party?

Your opinion does not make it the opinion of others. Kelly was disrespectful, but what can you expect from the Trump administration. Kelly also lied (yes, lied) about the congresswoman and that FBI building. He should apologize.

This story is important. My heart goes out to this young man. We need to be informed of the truth of what is going on in our community. We need solutions and we need people who are willing to stand up for truth, justice and for what is right. We need loving, caring, generous people and strong loyal leaders. I pray it comes quickly.

Addiction is a disease of hopeless imprisonment that makes the most outlandish things, for survival, sound like good ideas.

Consequences should be applied, but sometimes the representation of the true nature of the problem is failed to be conveyed. This young man is more than likely not just simply a criminal but rather a sick and suffering brother. I identify and empathize with the guilt, shame and demoralization addiction creates. … Let’s work toward a full picture not just criminalization.

… In 2017, General Assembly turns to courts for reform

The word “reform” that keeps being tossed around has nothing to do with positive change as it should. Our Tea Party-dominated General Assembly is “reforming” things that suit their ill-advised principles.

The changes they want are not reforms. These are exactly like the tax reforms of the past few years. These gave massive tax breaks to corporations and millionaires while shifting the burden to everyone else in the form of new and added taxes. Please use a word other than “reform.”

… Letter: Dogs in the aisles

The challenge for businesses and the general public is trying to decide what is legitimate and what is not. Hence, Mr. Harwood’s encounter at the grocery store. Make the wrong call as a retail employee or manager, and incur a legal wrath from someone whose disability was not accommodated.

To me, these companies are stuck between a rock and a hard place. I think disgust should be directed more towards those people taking advantage of a system intended to help those with a legitimate need.

The Interact Club has raised $1,866 at this point with some more donations coming in this week. The group we are raising the money for is Focused on a Cure. They are in Kannapolis. They have a Facebook page where you can see testimonies from breast cancer survivors. They assist people in Rowan, Cabarrus and Mecklenburg Counties.

I am extremely proud of the members of the Interact Club at Carson.

Focused on a Cure is very grateful for your donation and we really appreciate the hearts of these kids.

Mrs. Turrentine was my first-grade teacher at Landis Elementary. I didn’t want to go to school and be away from my parents; I was an only child. I cried almost every day. She was so kind and asked my mother if she could take me to her house to play with her daughter. She thought being with her would help me like going to school.

I will always remember her kindness. She really cared for the children in her class; she was a wonderful teacher.

She was a devoted teacher who instilled in us the love of learning at an early age. My family moved away from the area in 1967, but I always remembered my teachers at Landis fondly.

Thank you, David, for writing this article about our dear Mrs. Turrentine, and thank you, Mrs. Turrentine for making my earliest memories of learning such a joy. For those of us who were fortunate to have you, you encouraged us and paved the way for us to enjoy a lifetime of learning. I’m deeply grateful

I read this to her and she was so delighted. She’s in the hospital right now with a broken hip.

I had the honor of knowing and starting my education career at Landis Elementary with Clara Turrentine. She loved each and every child she knew. I admired her teaching style and caring personality.

She has always been my favorite teacher. Her love and kindness had a great impact on my life as a child. I have never had a finer teacher.

Thank you, Mr. Robinson, for your ideas. They provide plenty of food for thought. The details are worthy of exploration. We need to think outside the box.

One thing I would like to add is to install solar arrays that will generate electricity and provide cover for vehicles in the huge parking lot at the West End Plaza. This will put the wasted space to good use and may generate some income for the county by charging electric cars and collecting parking fees. There should be a free uncovered parking area.

… My Turn, M.H. Clements: Never before has our country strayed so far

You could not be more right. It is a sad state that we have allowed our country to sink to this level.

… Letter: Downtown tear-down would be a huge mistake

… Shober Bridge will be closed for about 10 weeks

Time for a modern bridge that does not require repair every six months.

Not to take away from that marvelous-sounding trip, but don’t forget the heights to be had nearby: Dunn’s Mountain Park.