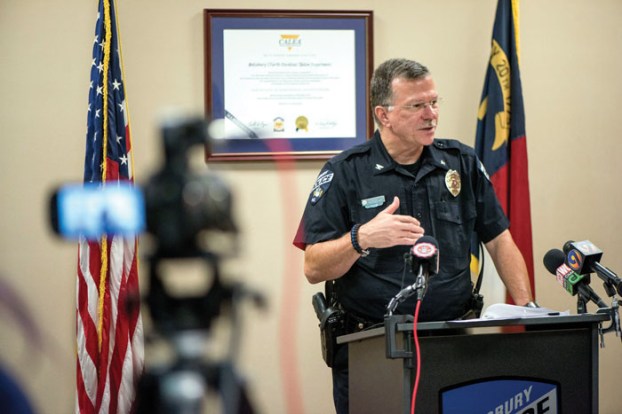 SALISBURY — In a month, the Salisbury Police Department will enter the next phase of its partnership with a federal agency to help address violent and serious crime, Police Chief Jerry Stokes said Thursday.

The Office of Justice Programs Diagnostic Center, which falls under the U.S. Department of Justice, will work with the Police Department and Salisbury residents to come up with ways to work together to address key issues, including the opioid crisis, violent crime, community engagement, and the low clearance rate of homicides and gun crimes.

Stokes spoke at a Thursday media briefing about how the department began its partnership and what the federal agency can do for the Police Department and the Salisbury community. The center is essentially a resource designed to provide law enforcement agencies and local leaders with customized assistance in addressing violent and other serious crimes.

The center will visit Salisbury Nov. 8-9 to meet with community members.

Stokes said he first heard about the agency from another police chief who had used the organization.

The Salisbury Police Department submitted data to the agency in August for consideration of a partnership. The data included population, unemployment history and crime statistics, as well as staffing and law enforcement training.

Stokes said at the press conference that his staff felt that the department was ready to embark on such a program. When the federal agency contacted the Police Department, conversations began about whether the department was serious about the process, Stokes explained.

The issues that the Police Department and the city have been working on are some of the same that the organization specializes in, Stokes said.

Stokes said he has spoken with Gemale Black, president of the Salisbury-Rowan NAACP, as well as other community leaders who will be able to provide insight about the city. Representatives of Rowan Helping Ministries, the Rowan County Chamber of Commerce and other city entities will be consulted as well.

The city of Fayetteville has used the federal center for its crime-reduction efforts and has seen some return on its efforts, he said.

The program is offered free and is funded by the federal government.

“There could be some minimal costs to some programs, but that depends on whether that program is right for us. For the most part, the assistance is free,” Stokes said.

“We estimate three years to work with the community toward these issues,” Stokes said.