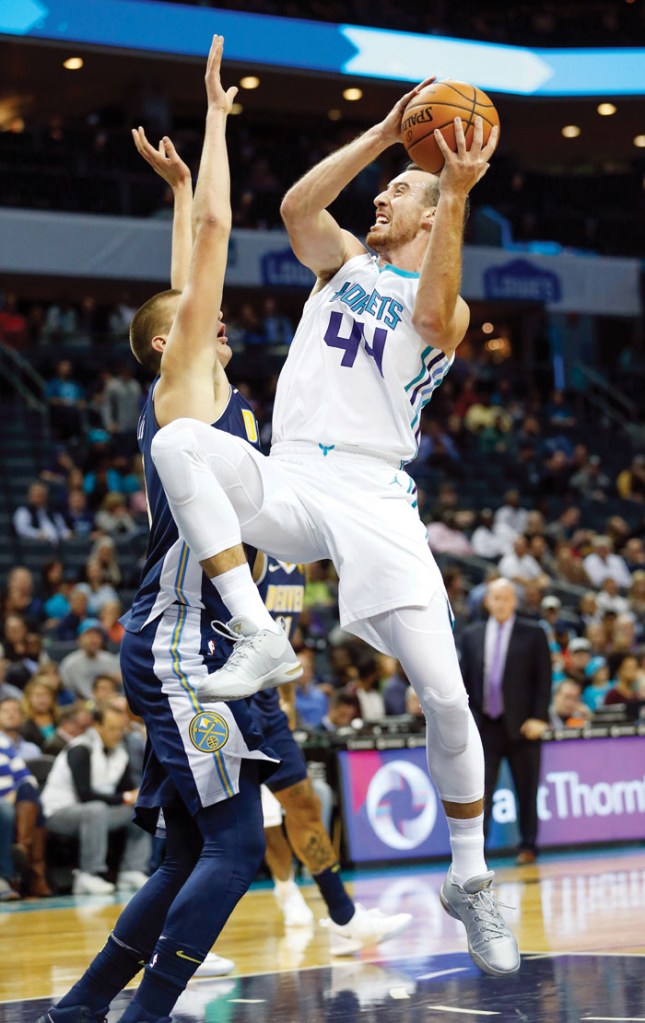 AP Photo/Jason E. Miczek ... The Hornets’ Frank Kaminsky (44) goes up for a basket while facing the Denver Nuggets during Wednesday night’s game in Charlotte. The Hornets won, 110-93.

CHARLOTTE (AP) — Frank Kaminsky scored 20 points off the bench, Dwight Howard had 15 points and 19 rebounds, and the Charlotte Hornets beat the Denver Nuggets 110-93 on Wednesday night.

Charlotte opened a 25-point lead in the first half and led 62-39 at the break on the way to its second win of the season. Denver has lost two straight.

Kemba Walker added 19 points and five assists for Charlotte. Malik Monk scored 12 of his 17 in the first half, and Jeremy Lamb finished with 16 points.

Kaminsky showed his versatility by scoring in multiple ways. He had 14 points at halftime, hitting two 3-pointers and also scoring on a series of mid-range jumpers and back-to-the-basket moves.

Howard was again dominant in the paint and on the glass while posting his third double-double in four games. He became the first Charlotte player since Emeka Okafor in 2007 with four consecutive 15-rebound games. The big man had seven rebounds, three on the offensive boards, in the first quarter despite being limited by two early fouls. He also showed improvement at the foul line, shooting 7 of 11 one game after missing all nine attempts at Milwaukee.

Charlotte relied on its long-range shooting early. Seven players combined to shoot 10 of 20 from 3-point range in the first half, nearly matching the team’s previous season high of 11 3-pointers by intermission. The Hornets finished 13 of 30 from 3-point territory.

Charlotte led by 11 in the first quarter and opened a 35-16 bulge in the second.

Hornets: Michael Kidd-Gilchrist made his season debut after missing the first three games for personal reasons. He started and played 10:37, scoring two points on 1-of-6 shooting. . Charlotte was without Nicolas Batum (sprained left elbow), Michael Carter-Williams (knee soreness) and Julyan Stone (strained left hamstring). . Treveon Graham left in the first half with a bruised right quadriceps but returned to play 11 minutes after halftime. . Howard picked up two fouls in the first 4:33.