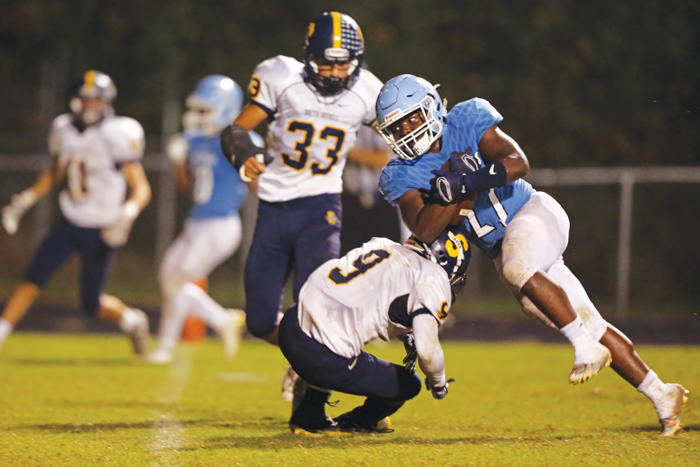 MOUNT ULLA — Senior running back Martavio Rankin’s first carry on Friday when West Rowan plays at Carson will be the 300th of his varsity career, a testament to his durability.

That he’s managed to score 16 touchdowns over the years, while sharing the load with backs such as Harrison Baucom, Jovon Quarles, Jayden Jones and Jaden Perry is a testament to his productivity.

Touchdowns No. 15 and No. 16  for Rankin came in short-yardage situations last Friday when West won at North Iredell, 47-15.

“Third and goal, so it’s either put it in the end zone or settle for a field goal,” Rankin said. “I usually get the ball in those situations. The offensive line came through and we punched it in there. We got touchdowns, not field goals.”

At 5-foot-7 and 205 pounds, Rankin is thick-chested and thick-armed. He looks like he’d make a pretty good defensive lineman, but he adds surprising nimbleness to his obvious power. He’s a good enough athlete that he’s scored more than 400 points for West Rowan basketball, and he’s been a key contributor for the varsity hoops squad since his freshman year.

“People think of Martavio just as a running back, but his biggest contribution for us is that he can do so many different things,” West coach Joe Nixon said. “We’ve lined him up at tight end, we’ve used him as a fullback, and he played some defensive end against South Iredell. He’s on all our special teams. He had a long kickoff return and he made a play for us on a faked punt against North Iredell.”

It was assumed that Rankin would finally get a chance to be West’s workhorse back as a senior, but then two talented backs who had played at North Rowan — Jones, a senior, and Perry, a junior — arrived at West.

“Every good back wants the ball a lot, and all three of those guys are certainly good enough to play,” Nixon said. “We explained to them that none of them were going to get 25 touches a game, and they’ve accepted that and they’ve worked with each other and they’ve cheered for each other. We’ve found ways to use all three. All three have helped us win football games.”

Rankin was the incumbent and the guy who had paid his dues in Falcon blue. He was the guy who might have been resentful, but he’s embraced the unexpected running back competition with grace and a team-first attitude.

“We think of ourselves as a three-headed monster at running back,” Rankin said. “We’re all different. We all have things we do best, things that can make us tough to defend. Perry is the scatback, a lot of speed.  Jones is a really smooth runner. As for me, I try to make sure that I run like a 205-pound guy should run, and I’ll try to get through the linebackers. All three of us have our jobs to do, and we all understand that if  one guy gets hot, he’s going to get the ball the most.”

All three backs had their moments on Friday. The three-headed monster produced five rushing touchdowns and 233 rushing yards. Jones, who broke two long jaunts, had the hottest hand — 10 carries for 143.

“They all did well ,” Nixon said. “Martavio was in there with our heavy set for his two scores. He’s tough in those situations. He runs with force.”

Rankin really enjoys basketball, but he understands his best chance to continue in athletics is football. He’s a strong student — A/B honor roll —  and that increases his chances exponentially to get an opportunity. He said he’s gotten a lot of letters, but no offers yet.

“Gardner-Webb has shown me the most love,” Rankin said.

Rankin was a beast on powerful Knox Middle School School teams and arrived at West with the burden of massive expectations.

He played almost exclusively on the jayvees for the Falcons as a freshman in 2014, but he got  his first varsity carries — pretty good ones — in county games against Salisbury and Carson.

His first extensive varsity duty came in 2015 when he rushed 113 times for 565 yards and four TDs as a sophomore. He pounded for his first two 100-yard games on back-to-back weeks against South Rowan and Carson.

Rankin overcame a knee injury that kept him out of several games as a junior and posted a career-best 122 rushing yards in a win against East Rowan.

Now he’s in the best shape of his career, and he has accounted for 1,251 career rushing yards heading into Friday’s Carson game. The county games always seem to bring out the best not only in Rankin, but in all his West teammates. The Falcons will enter Friday, 5-4, not what they’re used to, but they can still finish second in the North Piedmont Conference if they can beat Carson and Statesville.

“It’s been kind of a bumpy season,” Rankin said. “But you never know what will happen. We still have a chance to make it a good one.”

NOTES: Other standouts for West at North Iredell included defensive lineman Devin Turner, linebacker Daniel Durham and center Dawson Sheesley. … Drop end Brandon Wallace is West’s leading tackler and is averaging better than 12 stops per game. … Payne Stolsworth threw for 263 yards  Friday with 12-for-15 accuracy and now has 19 touchdown passes. Jalen Houston reeled in his 11th and 12th TD catches of the season.

College Football: Catawba’s Zach Mayo has heard it before