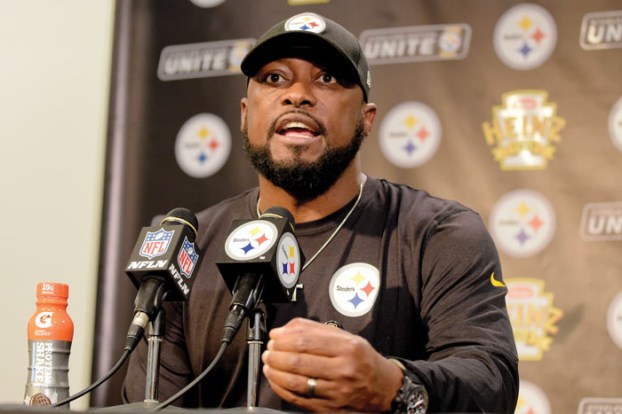 The Pittsburgh Steelers coach stressed Tuesday that Bryant is “not available via trade” following a social media outburst late Sunday in which Bryant expressed frustration about his role in the offense and hinted he wants to go to a team where he can get more playing time.

“It’s irrelevant whether his gripe is legitimate,” Tomlin said. “It’s whether it’s appropriate.”

Bryant initially called out rookie teammate JuJu Smith-Schuster while commenting on an Instagram post that claimed Bryant was being ignored by Steelers quarterback Ben Roethlisberger.

Bryant later deleted the post, replacing it with one in which he called Smith-Schuster a “great talent” then adding “I just wants mine period point-blank.”

Smith-Schuster brushed off the criticism on Monday, but Tomlin chastised Bryant for publicly airing issues he believes should be kept in-house.

“He was out of bounds in some of his actions in terms of the things he said on social media,” Tomlin said.

Bryant ran once for 2 yards and caught one pass for 3 yards in a 29-14 win over Cincinnati last Sunday, the second-lowest yardage total of his career. Seven games into his return after missing all of the 2016 season because of a drug suspension, Bryant is tied for third on the team with 18 receptions. He’s also third in targets, though his 13.0 yards per catch is well below the 17.3 yards per reception he averaged while becoming one of the NFL’s most potent deep threats in 2014 and 2015, when he scored 14 touchdowns in 21 games.

Tomlin and Bryant’s teammates have praised Bryant for his discipline and hard work since being conditionally reinstated in the spring.

The 25-year-old has successfully navigated the difficult path back to the league, taking all the necessary off-the-field steps required to clear the numerous hurdles the league puts in place for repeat offenders of the substance abuse policy.

“We’ve invested a lot, we’ve covered a lot of ground,” Tomlin said. “It’s obvious we’ve still got more ground to cover with him because we’re still having a conversation that’s not football-related.

“He’s done a lot in the period of time he’s been here in terms of improving, not only as a player but as a man. But we’ve still got a ways to go.”

Tomlin plans to speak to Bryant in person on Wednesday. Bryant was not at the facility on Monday after calling in sick.

While Tomlin declined to get into the specifics of what he wants to go over with Bryant, he is becoming increasingly frustrated by having to continually address Bryant’s status.

Last week, it was dealing with the fallout from a trade request Bryant’s team made earlier in the season. This week it’s talking about how to rein in Bryant.

Bryant has little leverage to force the Steelers to ship him somewhere before next Tuesday’s trade deadline.

He’s one slip away from a considerably lengthier ban that could end his career and his production this season is well off the eye-popping numbers he put up regularly while helping Pittsburgh to the playoffs during his first two seasons in the league.

Bryant also remains under contract through 2018. And despite his misgivings about the current state of the offense, the Steelers remain adamant he can be an impact player so long as he does his job, remains patient and focuses on the things that have helped him get his career back in order.

“He’s a good guy to work with in the building and has been,” Tomlin said. “We’ve been very clear about this process about getting reacclimated to us. Not an easy one but he’s worked diligently, I like his approach. But he says some things when he’s not around us that are somewhat of a distraction. And I say somewhat because we’re having to field questions regarding him, not because it’s high on my damn agenda.”

Tomlin hasn’t seen any evidence of Bryant going through the motions or pouting on the field during games.

All of which makes his decision to vent his concerns in an open forum all the more jarring, particularly after the first-place Steelers (5-2) put together convincing wins over Kansas City and Cincinnati to move past a shaky start.

The Steelers could make Bryant inactive to prove a point, though it seems unlikely. Smith-Schuster reported concussion-like symptoms late in the victory over the Bengals and is in the protocol.

His availability for a trip to Detroit is uncertain, meaning Bryant could see an uptick in playing time and opportunities.

Despite the headaches, Tomlin remains a believer.

“He had a great week last week of practice,” Tomlin said. “Usually when it happens, only a matter of time before it shows up on the field.”