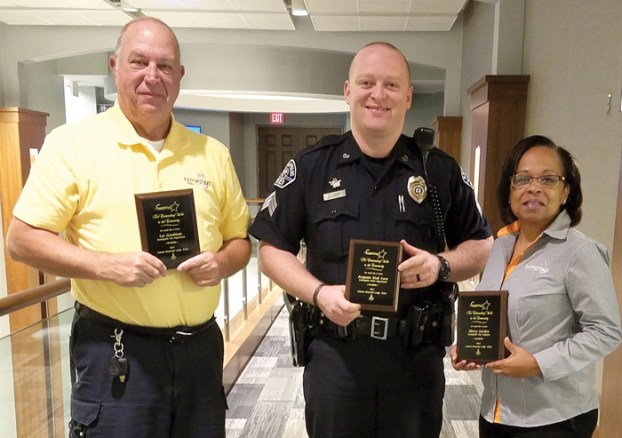 KANNAPOLIS — Cannon Memorial Masonic Lodge has honored three city of Kannapolis employees for their service to the community. Lee Goodman, Fire & Life safety educator; Sherry Gordon and Sgt. Nick Corn were all recognized for going above and beyond to help residents of the city.

Lee joined the Winecoff Volunteer Fire Department when he was 15 years old with his father supervising him. Lee then joined Kannapolis Fire Department in 1999 and has been a vital member of the organization ever since.

Goodman conducts programs within the community, as well as coordinates the department’s safety device-installation programs. He has a passion for helping the elderly as well as those with special needs and disabilities in Kannapolis.

Gordon has been with the city since 2009 as the Community Development Program Administrator. She works to create and improve affordable housing in Kannapolis, strengthen neighborhoods, and partners with non-profit organizations to provide needed services to Kannapolis citizens and children. She manages the city’s projects using funding from HUD to provide repairs and rehabilitation of owner-occupied homes and works with community partners to build new housing.

Gordon was recognized because rather than just doing her job, she truly cares for the people she serves and makes impactful connections with them. She has taken extra steps to collect needed items for individuals, connects families with non-profit services and periodically checks on clients who live alone or need help. In addition to serving on the Cabarrus County Homeless Task Force, Gordon also assists neighborhood organizations and volunteers as an elections monitor.

Corn has been employed by the Kannapolis Police Department since 2010. He and his K-9 partner, Boone, are part of the department’s special response team. He was promoted to the rank of sergeant last month. He is highly regarded by his fellow officers for his integrity, honesty and professionalism. In 2016 he received the Life Saving Award for his role in saving a person who had a cardiac emergency during a traffic accident. A native of Cabarrus County, he is involved in The Brook Church in Landis.

Rowan weather: Cool, with frost possible in the morning

You might run into some patchy fog this morning, but it will clear and be a sunny day with a... read more